Observing a flurry of eruptive activity on Jupiter's satellite Io, scientists using the Atacama Large Millimeter/submillimeter Array (ALMA) in Northern Chile have spotted numerous airborne plumes of sulfur dioxide (SO2), sulfur monoxide (SO), and potassium chloride (KCl) spewing forth from the colorful moon's many active volcanoes.

Jupiter’s volatile moon is an anomaly when compared to other planetary bodies in our Solar System in that it's home to over 400 active volcanoes and thermal vents emitting noxious sulfuric clouds. The signature yellow-white-orange-red coloration is produced by sulfur dioxide-frost blanketing its surface, combined with elemental sulfur and a cocktail of sulfur allotropes.

These vibrant composite images below depict Io in both radio (ALMA) and optical light (Voyager 1 and Galileo), with ALMA's images showing yellow plumes of sulfur dioxide as a Hubble shot of mighty Jupiter looms in the background. 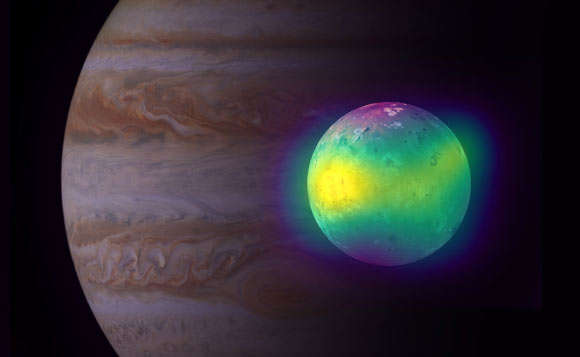 In detailed findings soon to be published in the Planetary Science Journal, astronomers believe Io's dense atmosphere holds the vital clues to understanding the moon’s intense volcanic activity and should lift the veil off its underbelly to reveal exactly what's occurring beneath its multi-hued crust.

“It is not known which process drives the dynamics in Io’s atmosphere,” noted Dr. Imke de Pater of the University of California, Berkeley and the Delft University of Technology. “Is it volcanic activity, or gas that has sublimated from the icy surface when Io is in sunlight?”

In an attempt to separate the natural mechanisims that produce Io’s atmosphere, Dr. de Pater and his team employed ALMA to acquire radio images of the moon as it transitioned from sunlight to eclipse on March 20, 2018, and the reverse process on September 2 and 11, 2018.

“When Io passes into Jupiter’s shadow, and is out of direct sunlight, it is too cold for sulfur dioxide gas, and it condenses onto Io’s surface,” explained Dr. Statia Luszcz-Cook, an astronomer at Columbia University. “During that time we can only see volcanically-sourced sulfur dioxide. We can therefore see exactly how much of the atmosphere is impacted by volcanic activity.”

In these intriguing series of observations, lofty plumes of sulfur dioxide and sulfur monoxide were witnessed billowing up from the volcanoes, resulting in the conclusions that rumbling volcanoes produce 30-50 percent of Io’s atmosphere.

The severe gravitational tug of Jupiter’s other moons Europa and Ganymede inflict considerable force, internal friction, and heat on Io, spawning massive supervolcanoes like Loki Patera, which measures over 124 miles across. Io is the innermost of all the Galilean moons and orbits the gas giant on average around 248,000 miles away, which is roughly the same distance as our moon is from Earth.

“We see potassium chloride in volcanic regions where we do not see sulfur dioxide or sulfur monoxide,” added Dr. Luszcz-Cook.“This is strong evidence that the magma reservoirs are different under different volcanoes. By studying Io’s atmosphere and volcanic activity we learn more about not only the volcanoes themselves, but also the tidal heating process and Io’s interior.”

It's a fan thing
Join SYFY Insider to get access to exclusive videos and interviews, breaking news, sweepstakes, and more!
Sign Up for Free
All Posts About
News
Science
io
jupiter
space
Related Stories

Iconic piece of ‘Quantum Leap’ sci-fi tech is back

Namor's got his iconic ankle wings in 'Wakanda Forever'