Fans knew Captain Marvel was going to be a big deal, but they might not have known she was going to be this big a deal. Earth’s mightiest hero is going to strut her stuff in her debut origin film, but then quickly turn around and flex on everyone from the Avengers to the Mad Titan himself. So when Avengers: Endgame directors Joe and Anthony Russo were asked about bringing a superbeing of her ability into the fold, they were quick to explain their approach.

This is one of the first time the Russos have addressed Captain Marvel’s powers — or her at all — so their interview with Cinemablend really brings fans into the balancing act that is a superhero universe. The directors explained that while Carol Danvers is the latest example, “it's always a concern of ours about overpowering characters, because the reason that people relate to these characters is their humanity, and that they’re flawed.” 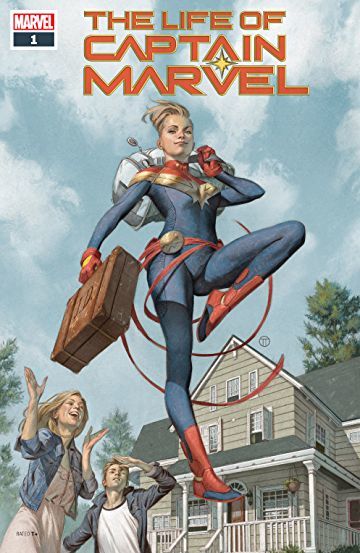 “The reason we love working so much with Captain America was that he was limited, and his heart was his superpower, you know? So we're all acutely aware of the dangers of having an overly powerful character. [But] we like sensitive storytelling, so… we found a thoughtful way through it.” That sensitive storytelling is one that focuses not on Kryptonite or some other elemental weakness, but often the relationships of their characters — all ripe for exploitation by villains or the dangers the heroes themselves create. And there's already been plenty of loss in Endgame.

“That's what kind of fires us up, I think, on a storytelling level, to be honest with you,” the directors said. “Because when you do have powerful characters, you have to work that much harder to find their vulnerabilities and complexities. And Joe was mentioning on a storytelling level… and keep the stakes high! Because that’s where those characters are vulnerable. And actually, that makes for great drama, and you run in that direction. As storytellers, that's been one of the most fun things we've had working with these characters is figuring out ways into them where they are vulnerable and they aren't all powerful.”

So how are they balancing Captain Marvel’s powers for the greater MCU? They aren’t, really. They’re just focusing on her humanity and those/that which she cares for — the same approach they’ve taken with the rest of Earth’s protectors.

Fans will see how exactly they prevent Captain Marvel from roasting everyone and calling it a day when Avengers: Endgame hits theaters on April 26.

Inside 'America's Ass': How that Captain America joke in Avengers: Endgame happened