Pop culture lovers are celebrating a very special movie milestone — Back to the Future is turning 35 years old. Today, BTTF is revered as a fun romp for the whole family. And, what typically floods the market whenever there’s a big family film or movie marketed towards children? That’s right — toys! But, in the case of Back to the Future, that wasn’t exactly the case. Back when it first hit theaters, BTTF wasn’t explicitly for an all-ages crowd. Add to that the fact that the toys and collectors' market was in its infancy, and the result is a whole bunch of missed opportunities. By taking a spin through Back to the Future’s merchandising past, we can see the awesome history of its collectibles and toys and see why today is really the best time to be a toy collector.

In an interview SYFY WIRE conducted with Marty Abrams, the owner of MEGO Toys, he explained how MEGO had helped create the collector’s market. While MEGO did not make any Back to the Future figures (the company was already bankrupt and out of business by the time BTTF came out), the company was instrumental in shaping the idea of a collector’s market and what made a toy a collectible rather than being a kid’s plaything. Many of the comic book franchises MEGO transformed into some of the earliest action figures were already being sought out and snagged up by both early adult collectors and young children wanting to play with the characters they knew and loved.

By 1985, the year that Back to the Future hit theaters, we had toys like Micronauts, Masters of the Universe, Shogun Warriors, G.I. Joe, Transformers, Rainbow Brite, Strawberry Shortcake, and more, but they were aimed toward, well, literal children at the time. Some of those children, now adults in the 35 to 50 age range, are still collecting toys today. These are the people that modern Back to the Future toys are being marketed toward, but in the decades since Marty McFly first got in that DeLorean, there have been several waves of BTTF toys.

So, for the anniversary of this amazing film, we are going to go back ourselves and take a look at a few of the toys that were created for it over the years. This is by no means a comprehensive laundry list of Back to the Future toys for the sake of looking at toys (which is always fun but not why we are here), but more of an examination of collectibles using BTTF as an example of the evolution of toys and toy collecting.

To repeat: In 1985, when Back to the Future came out, the movie wasn’t especially marketed to young children — the sort of audience that toymakers at the time thought would be eager to get action figures and other goodies. And, the collector’s market was still in an infantile stage where perhaps the powers involved didn’t realize that if they made the toys, people would eat them up.

That new sound toy manufacturers were looking for was there, they just weren’t listening yet. 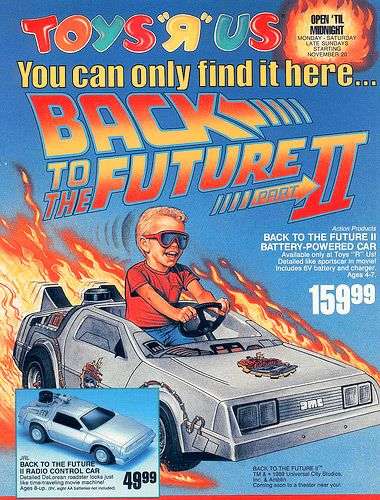 Surprisingly, though, the first piece of memorabilia for Back to the Future actually was a piece aimed at children: a 1986 Power Wheels-style car of the DeLorean that was sold at Toys“R”Us. Going with the DeLorean was easy because, as a car, it seemed to be an instant marketing success with very little creative thought. (As you can see in the picture above, the toy was revamped for Part II.) The filmmakers turning a DeLorean automobile into a time machine seemed to be all the creative juice toymakers needed — it was perfect just straight out of the movie!

And after that? Well, things were just pretty quiet in the world of Back to the Future and its associated collectibles. 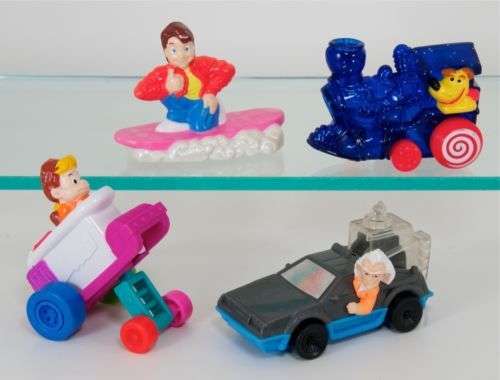 But once the early '90s hit and every (I’m not kidding here when I say every) beloved '80s movie got the Ruby Spears treatment, Back to the Future was suddenly reimaged as a Saturday morning cartoon. And because “cartoons are for kids," we saw a line of four BTTF cartoon toys make their way into McDonald's Happy Meals. 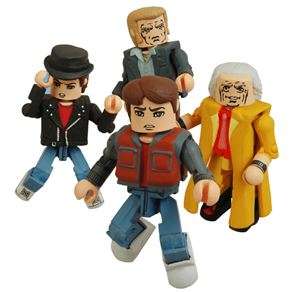 The cartoon came and went and for quite a long time thereafter, Back to the Future really didn’t have any merchandise on the shelves. However, this would change in 2010 for the movie’s 25th Anniversary.

Not only were we celebrating an anniversary, but there was a real big shift happening in the world of toy manufacturing and toy collecting. It made complete sense that toy companies were paying homage to this classic gem, and from here, the Diamond Select Mini Mates were front and center.

In 2014, which was creeping toward Back to the Future’s 30th anniversary, a little brand called Funko was starting to make waves in the toy sphere. Funko first started making bobblehead toys in 1998, but it was sold in 2005. From there, the brand started making ReAction Figures (a collaboration with current ReAction Figure makers, Super7), which then segued into its explosively famous POP!s.

Early 2015 BTTF Funko POP!s were crude, if you ask me, and the characters were barely recognizable. Fortunately for Back to the Future fans and current Funko POP! Collectors, there is a fantastic wave of BTTF POP!s coming to celebrate the 35th, and seriously, they are astoundingly accurate and recognizable (you know... for a POP!).

Still, the early POP!s were a sign of an upcoming wave of BTTF toy box nostalgia — not to mention Funko’s meteoric rise.

Once 2015 rolled around and Back to the Future hit its 30th anniversary, fans were treated to something we had never seen before: premium Marty McFly and Doc Brown action figures from Hot Toys.

Not only were these the first non-stylized Marty and Doc figures to ever come out, but they were (I repeat) Hot Toys. This meant the pieces looked exactly like Michael J. Fox as Marty McFly and Christopher Lloyd as Doctor Emmett Brown. It also meant the pieces were quite expensive, but for people who had loved and cherished the film for decades, it was a fantastic love letter to two unforgettable characters.

As 2015 was another milestone anniversary for Back to the Future, fans were treated to other cool goodies, such as a high-end sculpted movie poster from Sideshow Collectibles and a DeLorean from Hot Wheels.

In 2019, things were starting to look pretty cool for Back to the Future toy collectors. We got some more DeLorean pieces from Jada Toys, and an awfully expensive (like $1,600 expensive, if you recall) DeLorean model kit from Eaglemoss.

But for that 35th anniversary, the license holders are feeling generous and we are getting the Big Daddy Haul of brand-new fresh Back to the Future merchandise.

For the first time ever via NECA, we are getting fully articulated, 8-inch Marty and Biff action figures.

NECA is also making a stand-alone DeLorean — which is a little out of the company’s wheelhouse because it's usually more into characters than vehicles. Go figure!

NECA is giving fans a wave of action figures based on the characters from the aforementioned Back to the Future Saturday morning cartoon.

And we have two new board games coming and plushes from Kidrobot and SD Toys. Playmobil also joined the fun and gave fans an awesome DeLorean kit. And best of all, it was just announced via Hasbro that for the film’s 35th anniversary, the toy giant is creating a Transformers x DeLorean robot in disguise.

Other Back to the Future anniversaries have come and gone, from the 5th to the 10th to the 20th and beyond. This latest 35th anniversary seemed to come with a new peak of BTTF toys.

Why do we, all of a sudden, have this explosive amount of toys and collectibles to choose from? It’s not simply a reflection of the film or that we as toy lovers just want more items from this great movie (though that isn’t wholly untrue). It’s more that the people who grew up without toys from their favorite movies are now toy manufacturers making products of things they wish they had when they were young! Seriously, it’s Super7’s entire mantra, and it has an entirely new wave of Back to the Future action figures coming in December 2020!

Not only is it a fantastic year to be a Back to the Future fan, but looking at its merchandising history is a perfect example of just how far we’ve come as toy collectors. When we are fans of a movie, we want toys and swag that let us remember the good times with a single glance. We see that DeLorean and we want to travel through time. We see Doc and Marty and we remember laughing with our friends. It’s fun, and getting to immortalize this great movie in plastic, PVC, or die-cast form is nothing short of gigawattastic.

It's a fan thing
Join SYFY Insider to get access to exclusive videos and interviews, breaking news, sweepstakes, and more!
Sign Up for Free
All Posts About
Features
Movies
Back to the Future
Collectibles
anniversary
toys
Related Stories

'Watch this! Watch this!' How to watch SYFY's 'Back to the Future Day' marathon

Back to the Future's 12 best, most 'heavy' time travel jokes