You know what I kept thinking as I withered under the promotional onslaught of Marvel's recent PR blitz for Avengers: Endgame's home video release? What a shame that such an incredible film is saddled with such a lackluster movie poster. You would think history's biggest movie could find some extra pennies in the couch at Camp Downey to bypass the Photoshopped poster route and get a real poster done.

I'm actually baffled that Marvel Studios never once thought to commission Perez to do a poster of the team for any of the four Avengers films (or Avengers 2.5, Captain America: Civil War). But perfunctory movie poster design is one of the few miscues the MCU has had in its decade of success, and that's a real shame. How amazing would it have been to see Perez take a stab at the poster for Age of Ultron or Infinity War, both films based heavily on storylines the artist helped create?

If ever there was a penciller born to draw the Avengers, it's Perez. No one in the history of comics has ever been better at superhero crowd management. Take his iconic cover for Infinity Gauntlet #1, for example. Look at the design, the symmetry. It's a master class in cover composition, with 20 (20!) characters all perfectly displayed and one huge MacGuffin right in the middle. Just like nearly every one of the hundreds of covers Perez has drawn, that cover accomplished the most important thing a comic cover should do: make you want to buy that damn comic!

Perez's knack for memorable covers is the reason I became an Avengers fan. The first issue of the series I ever laid eyes on was Avengers #161 on the spinner rack at my local U-Totem, with Captain America and a few other heroes I didn't have Mego figures for fighting a dude with a bunch of ants. I don't remember exactly what I said to my mom, but I can assure you it involved much begging and pleading so I could buy that 30-cent comic. Something else that caught my attention was Wonder Man's outrageous costume. That garish garb was my first taste of Perez's brilliance at costume design. Only Dave Cockrum had a better eye for costumes in the Bronze Age.

It's not just the covers that make Perez the ultimate Avengers artist. Tales like the Ultron story in #161-162 feature the inventive panel layouts, crisp detail, and action that are hallmarks of his work. And look at the facial expressions his characters possess; even quiet moments crackle with energy on a Perez page.

(Oh, and his Scarlet Witch is THE BEST. Full stop.)

Perez cemented his place in Avengers history with his work on "The Korvac Saga." Even though he wasn't able to complete the epic storyline, he still contributed one of the best Avengers issues of the decade: #167. 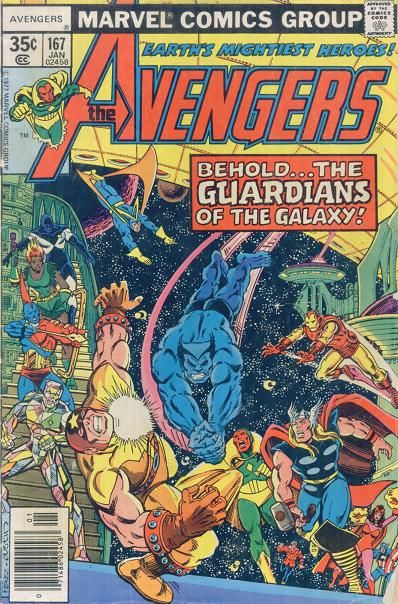 There are 13 heroes on that cover, and everything is crystal clear. Not many artists back then or now could create a memorable, active cover image with that many characters with such clarity.

Perez left The Avengers in 1980 after Issue #202, and he wouldn't draw them again for almost 20 years. Ultimately, comics is better off, because he left to go draw Justice League of America for DC Comics and later launched The New Teen Titans with Marv Wolfman. But man, for a diehard Avengers kid like me, picking up that first issue after Perez left back then was a real kick in the backpack. Not seeing Perez's instantly recognizable art on the cover was almost traumatic.

Thankfully, he returned to the book in 1998 for an epic run with writer Kurt Busiek. Without that sensational near three-year run, The Avengers very likely wouldn't have resumed being Marvel's flagship team book. But despite being the rare comics creator with financial security thanks to those never-ending Titans royalty checks, Perez has always remained a fan of the heroes he brings to life on the page. And he loved the Avengers.

It's why he cleared his schedule to draw the long-gestating JLA-Avengers crossover in 2003. That book would have crushed a lesser artist under the weight of expectations and sheer character quantity. Not Perez. Rising up to the challenge, he delivered some of the most spectacular art of his career. Now that he's retired from regular comics work, we've likely seen the last of new Avengers work from Perez.

Jack Kirby, John and Sal Buscema, Neal Adams, and, more recently, Steve McNiven and David Finch; The Avengers has always been a magnet for A-list talent. They all take a back seat to the greatest Avengers artist of them all ... George Perez!

What's your favorite Perez-drawn Avengers story? Join the conversation below. Feel free to hit me up on social media with your choices, too. Find me on Twitter, IG, and Facebook.

(Shameless Plug Alert! Behind the Panel is a video and audio series too. Our video series is chock-full of my in-depth interviews with amazing comic book creators. The Behind the Panel podcast is an audio documentary series that provides unique insight into your favorite creators and stories. Check 'em out, we think you'll enjoy them.)

It's a fan thing
Join SYFY Insider to get access to exclusive videos and interviews, breaking news, sweepstakes, and more!
Sign Up for Free
All Posts About
Comics
Features
Avengers: Endgame
Behind the Panel
George Perez
opinion
Related Stories