It’s the bottom of the ninth, and Stu Trololol has just stepped up to the plate. After conceding two games, the Charleston Shoe Thieves have fought hard to tie things up in their best of five series against the favored Baltimore Crabs. Now it’s the big one, the last game of the Internet League Blaseball finals, and they’ve been two runs behind since the second inning. The stakes couldn’t be higher. Strike one!

The Crabs’ pitcher, Adalberto Tosser, hurls the ball a second time. Stu hits it out of the park. Two players are on base; it’s a three-run homer — it’s over!

But before fans can celebrate this spectacular, unlikely victory, the screen turns black. Then the word “INCOMING” flashes up, big and bold. Chaos ensues. The gods are angry, they are on their way, and the Shoe Thieves are in for the ballgame of their career...

In the short time since its launch, the browser game Blaseball has become an obsession for tens of thousands of players. It’s easy to describe, but hard to explain fully. On the surface, Blaseball is a browser-based baseball simulation with absurdist elements. Players pick a team to support and then bet fictional currency on the outcome of games. These occur every hour, leading up to a playoff at the end of each week, which crowns that "season's" champions. Games are represented with text and a crude diagram indicating who is on base, and individual players are little more than cold collections of stats. Pretty straightforward so far, right?

But Blaseball’s simplicity belies its surreal side. The simulation is full of systems and events that paint a picture of a strange and sinister world. New players are birthed from eggs and can be replaced by copies from a parallel dimension. Strange deities turn up on a weekly basis, demanding to be worshipped or talking ominously about how hungry they are — oh, and the umpires sometimes incinerate people.

Blaseball has many layers, and after peeling back just a few of them, you may find yourself among its legions of fans, bewildering friends and family with excited outbursts of utter nonsense.

Blaseball’s creators, a small studio named The Game Band, have found a sweet spot. They provide just enough evocative detail to spark the imagination, but little enough that there’s room for fans to create their own stories and invent meaning. So, for instance, while players only exist initially as names, when the random name generator shoots out gold like Comfort Septemberish, Bonk Jokes, and Jessica Telephone, it’s easy to pick out favorites and start bringing them to life in your head. 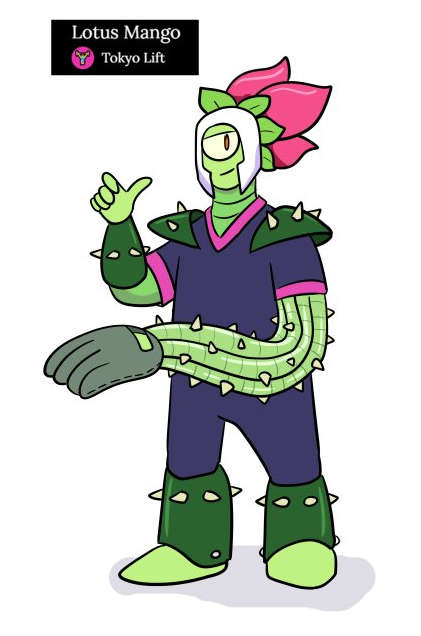 That’s where the magic of Blaseball truly begins, with the creativity of its fans. By now there are enough fan-made Blaseball works to fill an archive: art, fiction, comics, roleplaying Twitter accounts, live commentary, albums, and an enormous wiki have grown up around it. Almost all of the game’s 380 players have had backstories crafted for them, and when pivotal matches take place, there are thousands of "spectators" on the edge of their seats, typing chants on the game’s Discord server and discussing the sport as though it weren't just make-believe.

Sam Rosenthal, Stephen Bell, and Joel Clark from The Game Band say they’d been aiming to foster a community with Blaseball, but were stunned by its instant success. “The speed and scale with which people jumped at it was endlessly surprising,” Bell tells SYFY WIRE. “And it was every day we were finding some new piece of fan art or a minigame or music, you know, countless things. It just happened so immediately.” Clark adds: “We thought it would be intriguing to people and we thought seeing this league change would bring people in. We didn’t expect it to happen Week Two of the whole game.”

One of the reasons people are so invested in Blaseball is that it gives its community a great deal of control. The homepage describes it as “baseball at your mercy: everything from rules to rosters is in your hands.” The aim, insofar as there is one, is to scrape together enough cash to purchase votes for weekly "blessings" that will modify the sport or improve your team. You might gain a fishing net that makes them better at fielding, or force other teams to have to run to a new, fifth, base. It’s a winning formula: a sport where the passion of fans can affect the result.

There are even more significant stunts the players can pull, manipulating Blaseball’s systems to drive the plot forward. The developers pay attention to the community and respond to its wants and fears. It’s a bit like an enormous, baseball-themed game of Dungeons & Dragons. “From the start, it was based around building a community and allowing that community to shape this experience,” Clark explains.

The Game Band has correctly judged fans’ willingness to attribute meaning to random events. As Clark puts it, in regular sports, everyone puts their own personal narrative on the action. Likewise in Blaseball: “You build your narrative around these emergent systems.” So for instance, a pitcher who often takes the mound in close games is depicted as a theater major who loves causing drama. The key difference is that, in Blaseball, these narratives are far more likely to include black holes and vampires. 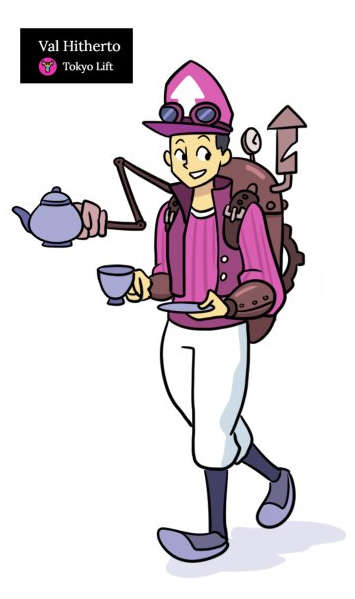 Even glitches can be incorporated into the story: When a grand slam crashed the Blaseball website, it was dubbed "The Grand Unslam." It’s claimed that the play was so powerful it tore apart the fabric of reality, warping the L.A. Tacos team's turf into the Infinite Los Angeli. “The community instantly came up with a narrative justification for it,” Rosenthal says. “And as the community is part of the story itself, every time something happens, we get to see what they come up with.”

The individual characters’ stories are also driven by fans. In August, swept up in the fervor of a spectacular final, fan Connor Bamba joined Blaseball’s roleplay scene, creating a Twitter account for the bog dryad player Paula Turnip. “It was a decision I made on a whim, and one that I truly didn’t put much thought into,” she admits.

Since then, Bamba's enjoyed gradually building up a narrative for the player, as well as seeing fans craft their own versions. Blaseball has an “any interpretation goes” attitude to its characters, meaning multiple variants can exist at once. “I have seen interpretations of Paula that range from a literal turnip-shaped scarecrow, to an athletic crop top-wearing cryptid, to my personal favorite, that of a Black woman with flowering dreadlocks or a leafy Afro.”

Fans invest time in devising these depictions, creating their own personal versions of the game’s players. It makes the characters feel more real, which means it’s easy to grow attached.

“People will bond with anything and anyone,” Bamba says. “With time — and care — I think it was inevitable that Blaseball’s fans began to love the lines of code that we watch play the game. It’s human.”

It’s not all sunshine and roses, however. Whilst the Blaseball community constantly develops its cast of likable, funny, adorable characters it can care about, these characters inhabit a nightmare world where they’re in mortal danger. At times the game is darkly comedic; at other times the destruction of a favorite player can cause real heartbreak.

That’s why The Game Band describes Blaseball as a horror game, one in which “you are organizing and building community against malevolent forces that are beyond your control.” Its fandom is built upon a foundation of loss and tragedy. 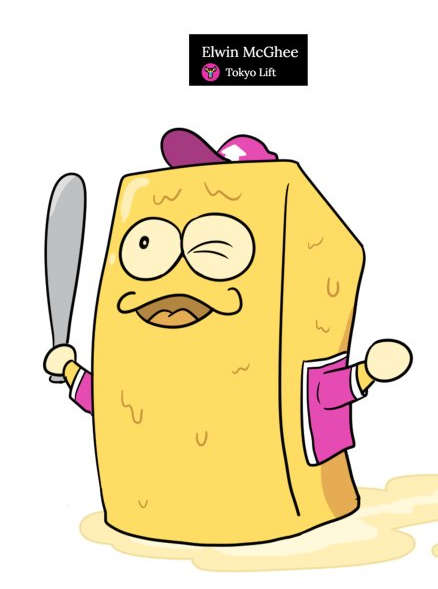 Clark feels that, as well as the fear of losing characters you care about, Blaseball’s horror lies in its uncertainty and chaos. “You want to keep things in your control, but it’s inherently slipping,” he says. That might be why there’s a degree of deliberate obfuscation to the simulation. It’s not always clear what you’re voting for, and it’s always impossible to predict what will happen a week on. This not only keeps the game endlessly surprising, it keeps the fans constantly on edge.

It also means plans often go wrong. One particularly memorable season saw fans trying to harness the powers of Life and Death, with a shockingly ugly outcome. A plot to rescue a player from the afterlife was successful, but it ultimately brought her back as a murderous revenant, pitching curveballs that could kill. Fans watched, aghast, as the terror they’d unleashed caused a dozen deaths.

Over half the casualties were spread across two teams: The Hades Tigers and the Canada Moist Talkers. TheMoistJ, who runs the Talkers’ Twitter account, says the team went through all the stages of grief that week: from disbelief, through anger, bargaining, and depression.

“This was the curling of the monkey paw. We were granted what we wanted with horrific and unforeseen consequences,” he says. Eventually, though, they reached acceptance. “We pulled together, both Tigers and Talkers, as being a part of a tragic event in Blaseball history.”

The developers play an important role as the game’s antagonists. When something bad happens, the fans’ anger is directed at the simulation, at the umpires, at the Blaseball gods. This effectively nullifies all inter-team hostilities. It’s hard to hate a rival team’s guts when you’ve both had your star players vaporized. All Blaseball fans have the same enemy, and it’s not each other. They’re all part of the same community: a notion embodied by a recently developed chant: “many teams, one league”.

Bell feels Blaseball is in part “a psychic reaction to things that are happening out there in the world.” It is very much a creation of the pandemic: dreamt up and developed entirely under lockdown. Subconsciously or otherwise, themes of helplessness, confusion, and shared tragedy have filtered into the game.

But there’s also hope, defiance, and team spirit. “Underneath the numbers, the wacky names, and the ominous threats from various gods, the people are what makes this community so amazing,” Bamba says.

The Blaseball universe is a cold and uncaring one, but its fans band together, supporting their imaginary characters and each other in the face of arbitrary forces.

It's a fan thing
Join SYFY Insider to get access to exclusive videos and interviews, breaking news, sweepstakes, and more!
Sign Up for Free
All Posts About
Features
Games
Blaseball
Interviews
baseball
fandom
sports
You May Also Like
Recommended by Zergnet
Latest on SYFY WIRE

'Puss in Boots: The Last Wish' hailed as one of DreamWorks' best