Although it will be another two years before the sequel to Marvel’s Doctor Strange hits theaters, rumors are already beginning to circulate about new characters we may see in Doctor Strange in the Multiverse of Madness. One of the most popular rumors is that Marvel fans will be introduced to another master of the mystic arts, Brother Voodoo, also known as Doctor Voodoo. Should those rumors be true, Brother Voodoo’s presence in the Marvel Cinematic Universe would open the door for audiences to see what religion and spirituality look like within the Black diaspora, while also establishing respect for traditional West African spiritual practices and religions. While the film industry is continuously improving its inclusivity of Black talent and audiences, it still has a long way to go in accurately portraying a complete picture of Blackness.

The representation and symbolism that is deeply ingrained in Brother Voodoo’s story and identity hopes to make visible the entirety of the Black diaspora and unlocks conversations of hope, acceptance, respect, and normalization of Black spiritual and religious practices. His background shows that he is more than just a centerpiece in the world of magic for the Marvel Universe, but also signals the need for a larger discussion on visibility for Black people, and who we are at our core.

THE MYTHOS OF BROTHER VOODOO

From the time enslaved Africans were first forced onto slave ships in the 1600s to the present day, religion and spirituality have always served as essential forms of survival throughout the diaspora. Dr. Will Coleman, a Black theologist whose studies have focused on theological and historical analysis of enslaved Africans, wrote in West African Roots of African American Spirituality, that “People of African descent retained elements of their original spirituality and combined them with European and Euro-American religious ideas and practices to craft a world view that provided them with resources for both survival and liberation.” This can be seen in the use of Voodoo (more recently spelled "Vodou"), Hoodoo, Santeria, and other practices to retaliate against their slave masters, heal those around them, or to empower themselves.

What sets Brother Voodoo, whose real name is Jericho Drumm, apart from more popular Marvel magicians like Doctor Strange, Scarlet Witch, or Loki is that Vodou is not really “magic” at all, especially in the way that we would traditionally think about it. It is a religion that is rooted in one’s relationship with their ancestors, lwas, or other deities, nature, and justice. His power does not come from an extradimensional source, but rather from the strength of his connection to his faith and fulfilling his purpose as an ougun. These same elements are present in other religious and spiritual practices that come from West Africa such as Lucumí, Santeria, Brujería, Candomblé, Voodoo and Hoodoo, and Yoruba. 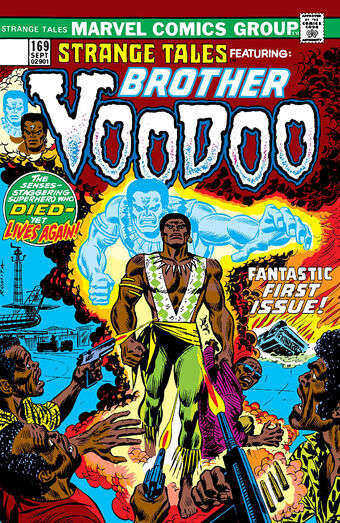 Brother Voodoo first made his appearance in Strange Tales #169 in 1973. Born in Haiti, Jericho was an accomplished psychologist, doctor, and author who left home to pursue a college education, and to avoid the shame he felt because of his family’s deep-rooted belief and practice of Vodou. Upon his return to Haiti, he found his twin brother, Daniel Drumm, who was his hometown’s supreme ougun (a Vodou priest dedicated to healing the sick, protecting people, and maintaining the balance between the natural world and spirit world) lying sick on his deathbed.

After a violent encounter with Damballah the Serpent God, who is a spirit or lwa, Daniel was cursed. As he lay dying, Daniel tried to instruct his brother to find Papa Jambo, a master practitioner of Vodou and Daniel’s mentor, to help defeat Damballah. However, Jericho still did not believe in Vodou, and attempted to save him with modern medicine to no avail. Daniel dies, and Jericho is drowned by grief and an itch to settle the score.

When Jericho found Jambo after a dangerous journey to help save Haiti — and the world — from Damballah’s influence, the Vodou master suggested that Jericho be Haiti’s new ougun, as he was fated to ascend into the role. Jericho donned his late brother’s traditional garb and committed to studying Vodou under Jambo, vowing to be the best and most knowledgeable student of the craft in order to avenge his brother. In his quest to become more powerful, Jambo initiated a ritual that evoked Daniel’s spirit from the grave. Drawn to Jericho, Daniel’s spirit merged into his body. This gave Jericho white streaks of hair and a “V” branded into the skin between his eyebrows.

THE DEMONIZATION OF AFRICAN RELIGIONS

Jericho is an incredibly powerful character known for his pure heart and dedication to maintaining the equilibrium between the world of man and the world of spirits. Most magic practitioners in the Marvel Universe who routinely use magic as a tool to bend reality at their will or to get what they want (even for the sake of good). However, he is widely respected for understanding that good and evil; life and death; light and darkness exist in a balance and a cycle, and uses his powers accordingly. While the character’s powers and adventures are played up to fit the world of comic books, many of the ideas and values that are central to the character are based in real-life practices of Vodou and other traditional West African spiritual practices. These practices are central to the Black experience throughout world history, which contextualizes the relationship that exists between Black identity, spirituality, and liberation today.

Before he was Brother Voodoo, though, Jericho was attempting to run from his family’s relationship with Vodou — an all too familiar occurrence for many Black people in real life. Rejecting Vodou or other types of spirituality is symbolic of the large push toward the assimilation of enslaved Africans in the Americas to adopt Abrahamic faiths. The result was the demonization of traditional African religions, which caused many of them to fall away from or even detest an essential aspect of their ancestry.

“A lot of us had to protect ourselves by covering it up with Christian Saints or Catholic Saints instead of the Yoruba gods, or any of our traditional African religion aspects,” says Veronica Carr, a 19-year-old Howard University student studying Film & TV who practices Hoodoo herself.

Many Black people are beginning to return to traditional West African-based spiritualities and forms of religion because of the recent string of sociopolitical events that have rocked the Black community within the past five to six years. This makes Brother Voodoo’s feature on the silver screen incredibly relevant to today’s demographic of Black nerds. Black people, particularly women, are exercising their religious autonomy by choosing to center their spirituality, and feel a stronger connection to those rooted in Blackness.

“I think it’s really great ‘cause I think we’re seeing [...] kind of a renaissance,” says Imani Bryant, a Howard University senior who is a practicing Christian and is currently conducting research for their senior thesis on Black and queer liberation theology. ”It’s just really interesting to be in this moment where a lot of people are very comfortable coming back to these traditional practices and these syncretic religions because Voodoo, Vodoun, Hoodoo, Palo, and Santeria, they’re all syncretic religions with traditional West African practices, some native practices, and Christianity, so it’s really interesting to be in this moment”.

Some Black practicing Christians still unknowingly hold remnants of the practices that were commonplace within traditional West African religions, which is another key element in recognizing contemporary Black spiritual practice within the media. This grounds Brother Voodoo in the current Black experience, and even connects him to those who may not overtly practice traditional African religions but still see some of those commonalities in their religious and spiritual practices.

“Modern Christianity, the way that the captor taught the Black people is ‘you [aren't] supposed to be doing all of that dancing. You’re not supposed to do all of that.’ That’s a part of our culture in praise,” explains Melanie Cole, a devout Christian who has generational ties to Voodoo and Hoodoo. ”Dance has always been a part of us. We dance. We sing and we praise. That’s who we are.”

“We’re always talking about people who passed on as still watching over us but we don’t name it,” Bryant says. “So, I’ve been very intentional in bringing that back to being named because I think that it’s really important, and it's something that’s [...] really ancient within Blackness. If you go all the way back to West Africa, you see part of a lot of religions and a lot of spiritual practices in West Africa incorporated ancestor veneration as the main form of worship.”

While it’s important to remember that Brother Voodoo is a comic book superhero and not a Christian figure, the real traditions and history of Black spirituality that shape his character and powers are a vital part of the breadth of the Black experience. Traditional West African practices have influenced comics in this way, but more importantly, they’ve shaped other areas of mainstream Black religious and spiritual worship, which many people might not be aware of. Without overstating Brother Voodoo’s importance, the character offers a chance to expose a mass audience to this key aspect of Blackness — and for Hollywood to depict it right for once.

MORE THAN A CENTERPIECE

The entertainment industry has not done a good job of recognizing Black spirituality in all its forms without mocking or dehumanizing them. Usually, film and TV portray Black religions as being over-sensualized, dark, demonic, exotic, or even comedic, which contributes to its general disregard and misrepresentation such as Spell (2020) starring Omari Hardwick or even Princess and the Frog (2009) starring Anika Nani Rose. Acknowledging the intersection of Black identity and spirituality, along with the historical context behind it, is the next step in the conversation of creating a holistic and complete picture of Blackness that has long been denied to us.

“I think it gets convoluted just because, in that sense, nobody has done the research, nobody has taken the time to realize the gravity of what it holds for Black people as a whole,” Carr states. “I feel like if we’re going to talk about traditional African religions in media, I think, when it has been handled by white studios or white producers, that it has a tendency to not really be the true nature of what it’s supposed to be.” 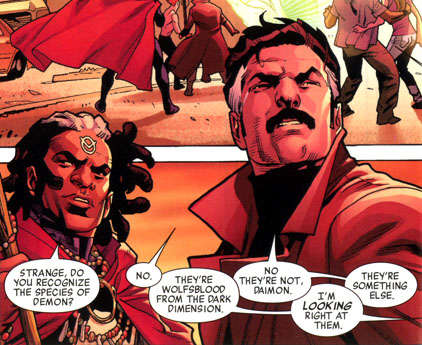 Doctor Strange in the Multiverse of Madness represents a chance, should the rumors be true, for mainstream audiences to be exposed to a powerful character who represents this major facet of Blackness. If that’s the case, then it’s upon Marvel Studios to ensure that Brother Voodoo is a responsible, faithful representation of traditional West African spiritual practices and religions. With the huge successes of Black comic book characters such as the late Chadwick Boseman’s Black Panther and Mike Colter’s Luke Cage, we know that Marvel has the ability to create characters and build worlds that are true to the Black diaspora. In any case, Brother Voodoo remains an important character, one who deserves his time in the limelight.

Spirituality and faith are key elements of Black identity. It is past time that we have a Brother Voodoo that showcases this in an authentic way which pays respect to the struggle of our ancestors, and to the interconnected experiences of Black people all around the world. Despite attempts to deprive Black people of our humanity, and strip us of our identity through imperialism, conquest, and assimilation, Brother Voodoo symbolizes the fact that we have instead found the strength to rebirth ourselves in our faiths, and used it to find freedom and liberation.

Wear Cyberpunk 2077 on your arm

Every MCU movie, ranked from Iron Man to Eternals

'Young Justice' is still one of the best superhero shows ever

The science behind infertility in 'Children of Men'