Cary Elwes is still bringing the hotness, as we wish

For many of us, the film The Princess Bride is too good, too important to belittle with being categorized as a favorite movie. It goes without saying. It just is. Like knowing that flowers are beautiful, that rainbows are good, that puppies and kittens and baby penguins are great. The Princess Bride is so perfect that it is understood as such.

The beauty of Cary Elwes is pretty much the same thing.

According to IMDb, Elwes had his first onscreen role as "Disco Dancer" in 1979's Yesterday's Hero (starring a very young, very hot Ian McShane) meaning this year we are celebrating 40 years of attractiveness so powerful that gazing upon it for too long might actually melt your heart. I mean literally. Proceed with caution. I'm not getting sued. Not today. Not on Cary Elwes Day.

We're going to look back at the genre roles that Elwes has blessed us with over the course of his career, one filled with, yes, an impossible face, like, what is he even doing to us having that face, like, how dare he, but also, the chops! His humor, his bravado, everything about him harkens back to another time, an old Hollywood icon dropped in our grateful laps. And he's still going, and — spoiler — he's still exceptionally handsome.

As we wish, indeed.

Two years before The Princess Bride, Elwes appeared as Captain Josef Schoden in The Bride, which is not a prequel, but rather a bizarre remake of The Bride of Frankstein starring Sting (!) and Jennifer Beals. I have not seen this film. What I have pieced together from various Wikis is that Sting creates Jennifer Beals to be a mate for his OG monster but the monster is all GIRL PRETTY *paw paw* and Sting is like "I will make her a REAL WOMAN" and makes her smart and fancy and then she falls in love with Cary Elwes because OBV and Sting is all "but you're mine!" and she's all "No!" and then monster kill Frankenstein and then she and the monster leave together so she just has a monster friend and no Cary Elwes, I guess? Also at some point, Cary Elwes has sparkle hair. I feel like this is all I need to know about this movie. But LOOK AT HIM!

I just did a whole thing about how I don't have to say anything about this movie and now by the virtue of the listicle as a format, I have to say something about this movie. I've truly fallen victim to one of the classic blunders. But there is a true magic to Elwes's performance in this film. At various points, he must be quiet and necessarily reserved, cocksure and snarky, romantic and heroic, dead and also only mostly dead. It's a stunning balance and he pulls it off with effortless aplomb that still today remains swoon-worthy, awe-worthy, and makes FANGRRLS everywhere as giddy as ever. 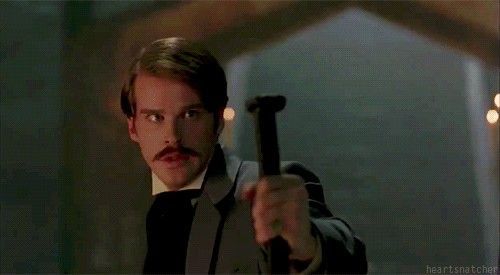 I really need to keep a running count of films featuring Cary Elwes screaming while either being in some way impaled or incised or doing said impaling or incising. Because so far we're at two and I know more are coming. The thing is, he's great at it. I bet it's on his C.V. In this specific film, his character Arthur Holmwood has to stake his fiancée Lucy because she's gotten good and vampyred and it's given her a mean case of the big white headdresses (seriously, if the utter steeze of this film is part of becoming a vampire, take me/don't stake me). He does so by taking the big metal spike and a big hammer, then does a full-on THE ROUS-ES BE BITING scream while Anthony Hopkins chops off her head. The headdress remains fine. It's awesome. I love this movie.

Hot take: A take about Cary Elwes. That's a little joke that's also serious. Anyway, my hot take is only one modern actor has truly ever nailed Robin Hood, and that actor is Cary f****** Elwes. Is it because "unlike some other Robin Hoods, I can speak with an English accent?" In no small part, yes, but also because a character like Robin Hood demands true and proper swashbuckling, something that means a mix of humor, heroism, and swagger, and which other attempts over the last 30 years have not been able to deliver. Elwes and Brooks, Locksley and Bagelle, you can't miss!

One thing we have not yet discussed is how very good Elwes is at playing a big damn douche, and that is exceptionally apparent in The Jungle Book. Elwes plays Captain William Boone, the fiancé of tiny baby Lena Headey and he suuuuucks but in a handsome way. He has a swordfight with Mowgli at one point and we see that he still smiles while doing those which is my personal favorite thing about The Princess Bride and something I refuse to believe is a character choice and is just Cary Elwes being very excited to fight with a sword. His character gets excited about treasure and then gets killed by a snake. Elwes also seems excited by that. Elwes has the best damn time in this movie and I love him.

Twister's Dr. Jonas Miller is a THIEF and a SELL-OUT as opposed to our artisanal heroes who are just in it for the science and the art and the serious likelihood of death. But he is Cary Elwes, which means he is a) handsome, b) very skilled at being a douche, c) def gonna die in a horrible way, here meaning via pole to the eye. Screaming impalement/stabbiness/creature bite #433454363.

Liar Liar is, for my money, one of Jim Carrey's finest performances, but Elwes is criminally underrated as the cringeworthy "Magoo" that is Jerry, Maura Tierney's Baxter of a boyfriend. He tries so hard to be a good man and father figure and gets zilch while Carrey's Fletcher is an unrelenting asshat who only becomes semi-decent because his kid made a magic birthday wish. WILL NO ONE THINK OF JERRY AND HIS TRAGIC CLAW?

Not a single one of you told me Cary Elwes was in the last season of The X-Files that I straight up was not going to watch otherwise and probably still won't watch tbh BUT STILL. Elwes played Brad Follmer, a former lover to Annabeth Gish's character Monica Reyes and a crooked FBI agent. That's my man. A consummate hot douche. If he impaled someone or something in this arc, we win Cary Elwes BINGO.

And this is where it all comes together into one good guy hot douche souffle with a side of severed foot. It has everything. As Dr. Lawrence Gordon, Cary Elwes serves us the following things: whispering concern; a decent man who loves his child; lying cheating douchecanoe; screaming while performing a manner of incision while also being the one to scream while receiving said incision. INCIS-CEPTION. And we get a return to the sheer cringe of "the claw" when he requests his daughter hand over her "tootsie."

Spoiler alert (but real talk, you either already saw every Saw movie twice or you never had any intention to — I am of that first category) Dr. Gordon returns for the seventh and final film wearing for some reason ALL THE TWEED and it turns out he's been in on it since Saw 2. All this AND he's secretly the bad guy? Forget Cary Elwes BINGO, he just sunk our Cary Elwes Battleship (and also our pants).

That brings us to today and the presently streaming Stranger Things 3 starring Elwes as Larry Kline, a corrupt politician who seems like a charismatic guy but is totally a giant douche (yes) and a philandering spouse (hell yes, douchey Elwes takes it all the way) with unsavory ties (YES) who gets kicked in the d*ck by Joyce Byers (YESSSSS). Cary Elwes clearly loves us and wants us to be happy.

And he's nowhere near done with the genresphere. He was recently announced to the cast of the upcoming Black Christmas remake. Give us a philandering douche who screams while being stabbed/stabbing someone/BOTH AT THE SAME TIME, you COWARDS.

Total D-bag, charming swashbuckler, misguided nice guy, or some beautiful combination of all of the above, Cary Elwes has given us 40 years of hot genre greatness. Here's to 40 more.

50 thoughts we had while watching Wild Wild West