Chosen One of the Day: Lord Kalidor from Red Sonja

Arnold Schwarzenegger has played the character Conan twice now, starring as the character in both Conan the Barbarian and Conan the Destroyer. 1985’s Red Sonja makes it kind of sort of three times with his role as Lord Kalidor: a Conan without the price tag.

One could argue that Dino de Laurentiis and his production company found a way to make a Conan-based movie disguised as a Red Sonja movie. De Laurentiis bought the rights to the Red Sonja comic book property and set the world in Hyborian, thus giving us a Conan with an upgraded wardrobe. 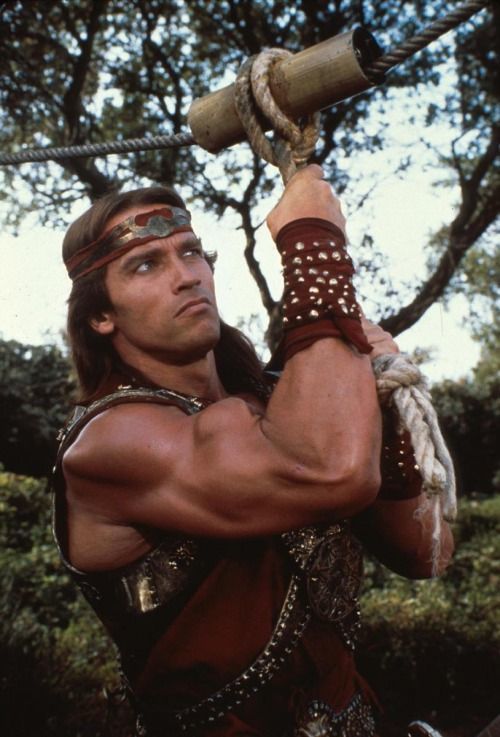 Lord Kalidor isn’t afraid of a little color. The first time he rides up on Sonja he is wearing a cute red and gold number. It’s not showing as much as Conan’s furry bikini hi-cut briefs, but it still works. Kalidor knows he can show off what he's working with using minimal effort so he doesn’t have to flaunt it all the time. He leaves a little to Sonja’s imagination like a respectable barbarian, while still coordinating all the way down to his ride. His trusty steed is adorned in similar jewelry — making him a lord of taste, honestly.

Unfortunately for Kalidor, however, Sonja is too wrapped up in her quest to think too much about him. It's not until his creepy stalking of her (which results in him actually helping her out when she's ambushed) that she pauses her hot girl quest to give him a true glance.

Stalkerish tendencies aside, Lord Kalidor also happens to be a barbarian who understands and respects the standards of the women he flirts with — even if his respect is built on whether he can defeat them in a sword fight. On today, this Thirstday, we shout out a confident but foolish barbarian.