The Godzilla franchise is, understandably, famous for its kaiju. Monsters like Mothra, King Ghidorah, Rodan, and the Big-G himself are the star attractions, but all those kaiju need to come from somewhere. In several movies in the franchise, alien invaders have been responsible for unleashing monsters upon the world. Some of these aliens have been more memorable than others.

Here are all of the alien species that humanity (and Godzilla) have gone up against. This list only includes aliens who appeared in Godzilla movies (apologies to the Vortaak, the charmingly retro aliens who menaced Earth in the Godzilla video game series beginning with Destroy All Monsters Melee). Also excluded from this list are the Seatopians from Godzilla vs. Megalon and the Futurians from Godzilla vs. King Ghidorah, as neither race was actually from space, hailing from the sea and the future, respectively.

We’re also not including alien kaiju on this list, because obviously, titans like Ghidorah and Gigan would best any humanoid invaders. However, the Millennians from Godzilla: 2000 are a bit of an exception, and are the worst invaders in the franchise because they’re not good aliens or a good kaiju.

In Godzilla: 2000, we learn that this alien race crashed on Earth during the Cretaceous Period and lost their physical forms, being reduced to anti-matter. Their saucer awakens in 1999 and searches for a way for the race to regain their physical form, eventually going after Godzilla’s DNA and absorbing information from computers.

The Millennians eventually became one organism, first merging with their ship to become a sort of squid-like creature before further mutating into the kaiju known as Orga. Neither monster was that memorable, and because the Millennians never had a face (or even a physical body), they were a forgettable alien invader too. 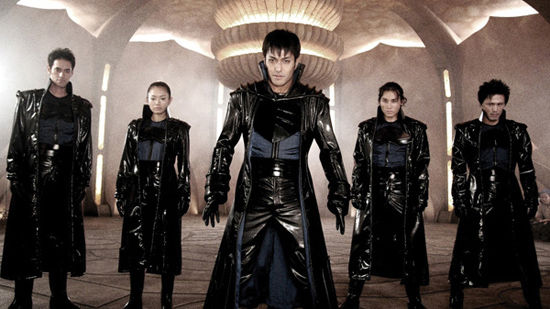 Xiliens made their debut in 1965’s Invasion of the Astro-Monster, but the race was brought back and reimagined for 2004’s Godzilla: Final Wars. Whereas the original aliens were charmingly retro (more on them later), Final Wars’ Xiliens were dated from the moment they first appeared on screen. Sure, they managed to take control of all the world’s kaiju and nearly took over the Earth to harvest humanity for food, but they have the aesthetics and temperament of a low-budget, J-Pop version Neo from The Matrix.

Godzilla vs. Gigan's M Space Hunter Nebula Aliens have the best name out of any alien in the franchise, and they actually have a cool, creepy way of life. They’re giant cockroaches from space, and they inhabit the bodies of dead humans and wear orange suits.

Sadly, what they actually do is pretty lame. They build a tower that looks like Godzilla as part of a children’s theme park devoted to peace (weird flex, but okay). That invasion plan fails. In the next movie, Godzilla vs. Megalon, they team up with the Seatopians, whose plan partially involves taking control of a Jet Jaguar, a robot invented by a toymaker. Grow up, ya bugs.

The first of two alien races from the Godzilla anime trilogy, the Exif are a religious species who come to help humanity attempt to defeat Godzilla, and when that doesn’t work, help them recolonize the species elsewhere. However, they had a hidden agenda the whole time. Rather than help humans, the Exif wanted to get them to believe in their scientifically provable god, King Ghidorah, who would bring about their destruction.

It’s kind of a neat concept, creepy and nihilistic, but the films totally botch the execution. The first film, Planet of the Monsters, introduces them as a quick aside in the prologue, and we don’t really get a chance to learn much about them with everything else the grim, trope-heavy anime has going on. So, when they’re revealed to be yet another secretly evil alien race, it’s not as effective as it could’ve been.

The Bilusaludo are the second of the anime trilogy’s aliens, and suffer from many of the same problems that the Exif do. However, they’re given a little more character in the second film, City on the Edge of Battle, and their secret evilness is a little more nuanced than the Exif’s betrayal.

The Bilusaludo love technology, especially nanometal, a self-sustaining and intelligent material. The Bilusaludo, who mostly seem like a stern but nice alien race, reveal that they aspire to fuse with the nanometal, ascending to something greater and more powerful. The humans refuse to do this, lest they sacrifice their humanity. It’s an interesting dilemma that the movie buries under itself, limiting the effectiveness of the Bilusaludo as aliens.

There’s something delightful and unnerving about the cheap Planet of the Apes knock-offs who were the villains of the Showa era’s two Mechagodzilla films. The Simians, also known as the Black Hole Planet 3 Aliens, used human disguise to mask their own ape-like appearances. With the exception of Mechagodzilla, Simians were strangely low-tech, opting to work mostly on a human level in a manner that was both good for going incognito and good for the infamously low budgets of the ‘70s Godzilla films.

Before Marvel was boasting about the most ambitious crossover event in history, the Kilaaks were bringing pretty much every kaiju together for the all-out slugfest known as Destroy All Monsters. The glittery, all-female (secretly slug) race has a serene creepiness to them, sporting an extra-terrestrial aesthetic that’s both simple and distinctive. They’re basically evil alien disco-ghosts, even if they don’t have all that much personality underneath their shimmering cloaks.

The first aliens to ever appear in the Godzilla franchise were also the best. The Xiliens made their debut in 1965 and it shows, as they’ve got a serious Mod vibe. It’s a near-perfect mix of retro-kitsch and cool, and for a supposedly emotionless race, they’ve got plenty of charm. The Xiliens plan to trick Earth into giving up Godzilla and Rodan to battle King Ghidorah, only to turn around and unleash the monsters on humanity, is a tactic that future aliens would try to adopt but never so successfully (or as stylishly).

It's a fan thing
Join SYFY Insider to get access to exclusive videos and interviews, breaking news, sweepstakes, and more!
Sign Up for Free
All Posts About
Features
Movies
Godzilla
Toho
aliens
rankings
Related Stories

Godzilla vs. Kong has no post-credits scene for two very good reasons

When Godzilla battled The Avengers: A history of the epic crossover