One of the coolest concepts Silver Age comic creators Robert Kanigher and Ross Andru ever came up with for DC Comics was the Metal Men. They were a team of artificially intelligent robots invented by Dr. William Magnus with unique abilities based on their namesakes taken from the Periodic Table of Elements such as Gold, Lead, Mercury, Iron, Tin, Tungsten, and Platinum. For youngsters, this book not only entertained as superhero comics do, but also served as an introduction to chemistry and the science of our elements.

But the Metal Men have been presented in a variety of ways throughout the decades, often as a novelty act, even as recently as the New 52 and Doomsday Clock, but now they enter the current DC Universe, with a little inspiration from HBO's Westworld and the fallout of the 2017 Dark Nights: Metal event in a 12-issue Metal Men maxi-series written by DC's Co-Publisher Dan DiDio (who also wrote Metal Men in the 2009 anthology Wednesday Comics) with art by Shane Davis and Michelle Delecki, and hits comic shops October 1.

SYFY WIRE spoke with DiDio and Davis about their approach for the series and present the covers to Metal Men #2 along with a gallery of unlettered interior art. 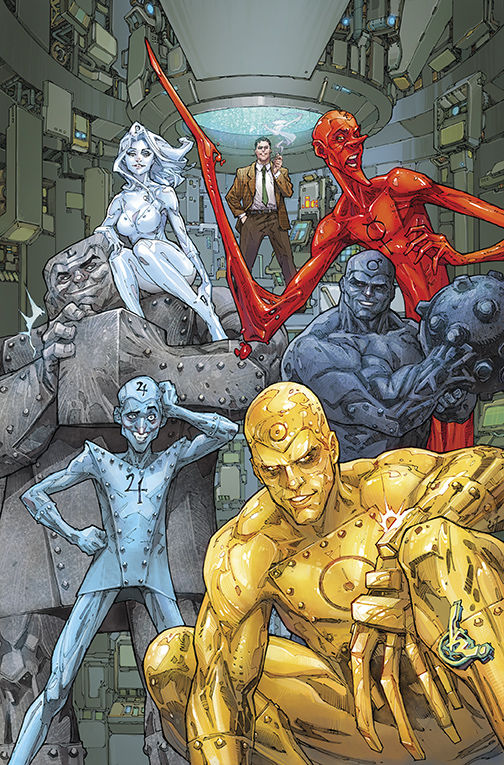 DiDio was watching Westworld on HBO right around the time that Dark Nights Metal was going on, which made him think about the Metal Men in ways he hadn't before, like what is the true essence of being sentient? What is your life and what is not your life? What is an interpretation of life? How does it change and can it change?

"I got excited about the idea of Nth Metal as it was presented in the Metal series," DiDio explained. "That got me wondering what would happen if we had a member of the Metal Men made out of Nth Metal (see pic below), that affected other people's emotions and brought out different feelings or emotions out of these characters? When you drop a character like that in the middle of a  team, it upsets the dynamics of how these characters see and act with each other."

"Because Nth Metal is a psychic metal, these ideas would naturally be explored. It's going to bring emotions to the forefront and starts to change the emotional spectrum of the characters. They start to see themselves more than a single character with a single emotional beat, and in much greater depth into who they are." 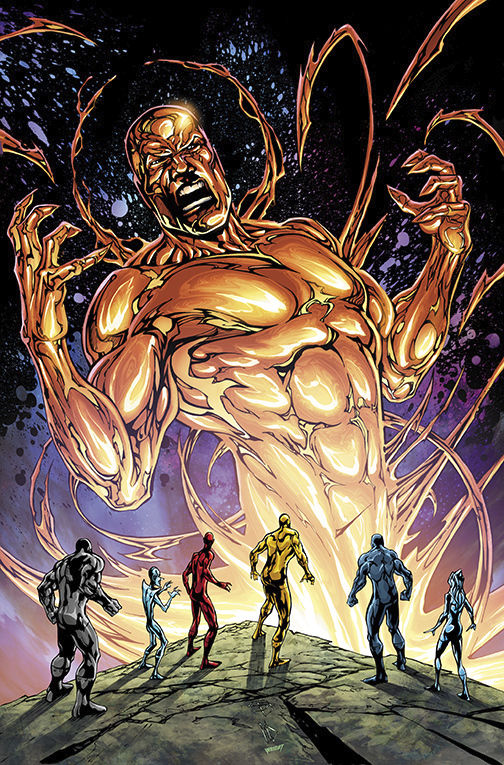 With this different, deeper evolution, DiDio said they are tapping the entire history of the Metal Men and acknowledging the various interpretations over the years. They looked for iconic moments and found new ways to present them for audiences old and new. For example, be on the lookout for the giant manta from their 1962 first appearance in DC Comics Showcase #37.

One thing that won't change is the look. "Visually, the retro suits always had a classic look," Davis reminisced. "I was a fan of the old comics and how they used their abilities to morph into objects for battle. I never thought of giving away that gimmick; it's what made them unique on page and visually stunning back then, and still does today."

Metal Men was always ahead of its time and when considering modern advancements in robotics, Davis contended that the Metal Men always seemed more advance.

"One of my first introductions to Metal Men was having an argument in my late teens about T2: Judgement Day, and whether the liquid Terminator was a rip off of Metal Men. I had really in-depth discussions about robotics and liquid metal, and that Metal Men would be the most advanced robots ever, even though it was an old book. Being able to form, reshape, whatever. I've always thought Metal Men was relevant in today's era,"

"I did have to draw them apart and open them up at some point," Davis added. "I couldn't see past that they would have robotic guts made of the same metal that would liquify. I thought about it from that sense but eventually used the comic book logic of disbelief."

A vital point DiDio is exploring and properly defining is the relationship between Dr. Magnus and the Metal Men, which has been interpreted in a number of ways in older comics.

"I really want to get at the heart of who they are and how they interact," DiDio said. "What do they mean to each other and why do they need each other? Part of the first half of the series is going to be figuring out what Magnus' relationship is with the Nth Metal Man. It feels like they're both battling for the soul of the team. That creates a lot of dissension amongst the team itself."

"We're (eventually) going to introduce a second group of Metal Men, composed of mostly Metal animals and broadening out the mythology to introduce more types of metals as the story develops."

More metals? Just how far down the periodic table is DiDio planning to go? "Forgive me for saying this, but I have a lot of gas–" DiDio said laughing, "...in the book, that is, and try to create a whole new Gas Gang." This refers to old adversaries of the Metal Men that featured members Oxygen, Hellium, Carbon Monoxide, Carbon Dioxide, and Chrolroform.

Issue #1 is out October 2, and DiDio says the first issue is about affirming, changing and challenging the status quo, all at the same time. So check out the preview below and then head to  the shops this Wednedsay and pick up the whole issue for $3.99.