Dynamite Entertainment is fully fueled and blasting off with its new Battlestar Galactica: Twilight Command series on February 6, and SYFY WIRE is presenting an early look inside, complete with creator comments from Roche Limit writer Michael Moreci.

Paired with stellar art by Breno Tamura (Twelve Reasons to Die), the plotline centers around valiant members of the elite Twilight Command who find themselves outnumbered by Cylon centurions and stranded alone on New Caprica. These crack commandos could be one of the last shards of humanity left in the entire galaxy, and mankind might be doomed if this desperate stand to vanquish the planet's cruel overlords fails. 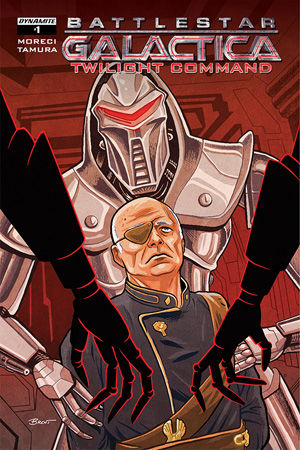 This is Dynamite's second Battlestar Galactica title currently being published, along with John Jackson Miller's BSG Classic miniseries, which will wrap up this April.  Our exclusive 8-page preview in the full gallery below has a Cylon skinjob and his robotic henchmen encountering a resistance ambush on a dark and rainy night.

SYFY WIRE spoke with Moreci on this project playing in the BSG sandbox to learn about his rapt attention to the satisfying space opera material while extending the boundaries of the BSG mythology. It's certainly no secret to anyone that Moreci is a tremendous sci-fi fan, and this new BSG title has him operating on all geeky cylinders.

"Sci-fi is what I do," he tells SYFY WIRE. "And of all the sci-fi I love, Battlestar Galactica is at the very top of my most cherished. It's one of the most powerful sci-fi stories ever told, and it came (the most recent series, I'm talking about) at the most perfect time. I am honored -- so very honored -- to be contributing to this story, and while I was overjoyed to write BSG, I did not take the responsibility lightly."

Moreci's primary goal was to contribute something that wasn't just story filler, and he wanted to craft something that captured the heart and soul of the BSG story and stood on its own two feet.

"That's why the story relies, mostly, on new characters," Moreci explains. "And we see these characters in action -- the Twilight Command mentioned in the series title, led by Sergeant Flores and showcasing a talking frakkin' toaster (!!!) -- as they go head to head with the most horrible skinjob: Cavil. We're going to see, from this point, an epic showdown between humans and Cylons, and I am confident we will not disappoint. BSG fans, and I'm speaking as one, will find a lot to love here."

Ash Williams blasts back to the disco era in first look at Dynamite's new 'Army of Darkness: 1979'

The 13 best TV shows based on movies