Ruthless, cunning, brilliant, and obsessed with vengeance, Baron Helmut Zemo has spent decades building his own legacy as one of Marvel's best comic book villains. From his humble start as "Phoenix" to his work with the Red Skull and the Masters of Evil to the creation of the Thunderbolts (a team of villains posing as superheroes), Zemo's plans have always been grand, even if the villain himself often works in the shadows.

Now, with The Falcon and the Winter Soldier, it's Zemo's turn to take center stage.

A lurking threat to superheroes across the MCU, Zemo (played by Daniel Brühl) is a former commander of a Sokovian kill squad. After his family was killed during the Battle of Sokovia during Avengers: Age of Ultron, Zemo vowed to destroy the Avengers from within as punishment for their role in the fight. Despite being seen locked up at the end of Captain America: Civil War, Zemo is now free following the events of Avengers: Endgame.

While it's unclear and worrisome how Zemo freed himself from S.H.I.E.L.D. custody, it's equally unnerving to see (from the trailer) that he's been busy sowing chaos while building toward his stated goal of a world without superheroes.

Though there are few similarities between Zemo in the comics and in the MCU, Zemo's laser focus on achieving revenge through any means necessary stands paramount. We could see the Falcon and the Winter Soldier writers mine certain comic arcs, especially with Zemo's trademark purple mask popping up in trailers.

While it's impossible to guess what the villain has planned yet, SYFY WIRE asked the writers who have given him a voice in the comics for some insight. Here, Roy Thomas, Tony Isabella, J.M. DeMatteis, and Kurt Busiek look back at stories that shaped Helmut Zemo, the 13th and current Baron Zemo in Marvel Comics lore.

First, some backstory: The first Zemo was created by Stan Lee and Jack Kirby in 1964 as a maniacal Nazi scientist ultimately responsible for Captain America's long absence from comic books. Zemo was behind an explosive drone that seemingly killed Bucky Barnes and plunged Captain America into the arctic. After a brief flashback cameo in Avengers #4 (1964), Zemo returns with his own supervillain team, the Masters of Evil, ready to renew his blood feud with Captain America. In the end, though, Zemo (not yet named Baron) only lasts until Avengers #15 (1965), in which he dies in a rockslide battling Captain America.

Even though his story may have been short, Busiek says that it's telling Lee and Kirby spent so much time on Zemo.

"Stan and Jack cared enough to make him distinctive, with the glued-on hood, and then to use him in a second series — he's not the world's most complex character, at least not in those early days, but he's a character of some weight," Busiek says. "They certainly used him often in that year or so that he existed as a living villain. He shows up eight times, which is a lot for a single year."

Those appearances left a mark on generations of other writers who have since expanded on the character's history and family tree. Even minor additions, like the word "Baron" to his name in Captain America #128 (1970), spawned dozens of arcs and angles, Busiek says. In Sgt. Fury and His Howling Commandos, Lee's captions referred to him as "Dr. Zemo." By his time in Avengers, he was just Zemo. He didn't become "Baron Zemo" until five years after he died, a change in title that Busiek says might have happened when Lee "got him confused with Baron Strucker or something." Future Marvel writers, Busiek included, got a lot of creative mileage out of this supposed accident.

Zemo's son, Helmut Zemo, was also a "happy accident," according to creators Roy Thomas and Tony Isabella. This villain's origin story began with a late script and a call from Captain America artist Sal Buscema in 1973. As time slipped away one Sunday night, Buscema phoned Thomas to complain he had no pages to work on for the next day. In typical Thomas fashion, the former Marvel EIC got to work.

"I vamped a few pages of the beginning... and grabbed onto the idea of Baron Zemo having a son who wants vengeance as just a quick thing to come up with," Thomas recalls via email. "He, as much as, or perhaps more than, Baron Zemo was intended to be a throwaway villain."

In 1973's Captain America #168, Zemo appears as a villain named the Phoenix, taking Steve Rogers captive. Only at the end does Phoenix reveal himself to be Heinrich Zemo's son, Helmut. Hell-bent on revenge, he ties Cap up over a vat of Adhesive X, the same material the hero used to defeat the elder Zemo. In a classic villain monologue, Zemo recounts how Heinrich's loss to Captain America drove his father insane, resulting in the death of his mother and his current quest for revenge.

"There was no written plot, but Sal had written brief border notes which gave me the bare bones of what was happening in the story. I just fleshed out some of the details, especially when it came to describing Helmut's unhappy childhood," Isabella says. In the end, Zemo is defeated and meets an end very similar to his father's demise: falling into a vat of the poisonous Adhesive X while trying to escape.

Zemo would have to wait almost 10 years to be resurrected, this time by J.M. DeMatteis and Mick Zeck in Captain America #275 (1982). When DeMatteis was a kid, he enjoyed reading the original Zemo in Avengers, especially since he was responsible for Bucky's death. A few decades later, when DeMatteis was writing Captain America, he tapped Helmut and "put him in Full Zemo Mode, establishing him as a major villain."

"He seemed like a far more psychologically interesting character than the original Zemo," DeMatteis explains. "All of us, at one time or another, are wrestling with the ghosts of our parents — either trying to measure up to them or rejecting them. And that's very fertile ground for stories. Zemo II was a tortured soul and he was projecting all his own issues, all his own pain, all of his conflicting feelings about his father onto Cap instead of dealing with them himself."

Upon Zemo's return, it's revealed that while he just barely survived his bath in Adhesive X, the poisonous mixture left his face melted. He teams up with Arnim Zola, the first of many HYDRA and Helmut team-ups to come, and he refers to himself as "Baron" for the first time.

Later in the run, DeMatteis placed Zemo under the influence of the Red Skull and his daughter. While they're teaming up to destroy Cap, the Skull is playing mind games with Zemo, portraying himself as the father figure Zemo has been looking for all these years.

The next arc that added to Zemo's legacy was possibly the most important. The "Mansion Siege" story by Roger Stern and John Buscema (Avengers #273-#277, 1986-1987) received universal praise from Avengers fans and proved pivotal for Zemo. Not only did Stern's tale depict a ruthlessly vicious Zemo, but it brought him up to A-list villain status as he systematically dismantled the Avengers with his new and improved Masters of Evil. After meticulous plotting, Zemo destroys the Avengers Mansion while taking out the Black Knight and Monica Rambeau. Things got worse for the Avengers as Zemo and his massive crew of supervillains beat Jarvis and Hercules within an inch of their lives.

Captain America is hit hardest as he's kidnapped, tortured, and forced to watch as Zemo destroys his World War II-era shield and rips up the only remaining photo of Rogers' mother. Brutal.

"Yeah, he lost in the end, but he came close to taking the Avengers down," DeMatteis says. 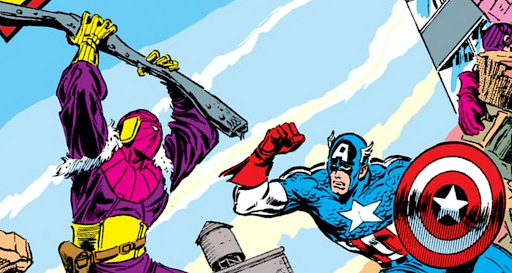 "Mansion Siege" is also critical because of its influence on the next generation of writers, specifically Kurt Busiek, who credits it for sparking his use of Zemo in his Thunderbolts run. In the wake of the '90s tie-in Onslaught and the launch of Heroes Reborn, Busiek and artist Mark Bagley launched the mysterious Thunderbolts in the pages of Incredible Hulk #449. With the absence of the Avengers and Fantastic Four, the team, led by seemingly new hero Citizen V, is tasked with protecting Earth. In a career-defining moment, Zemo was revealed to be the leader of the Thunderbolts in a self-titled book in April 1997. Worst of all, he was overseeing a team of villains.

"I loved what Kurt Busiek did with Helmut in Thunderbolts," Isabella says. "Helmut was a villain, but he did fight on the side of the angels, occasionally."

The run gave Busiek the chance to expand Zemo's motivations beyond revenge for his father while allowing him to have a little fun, giving birth to the modern "elitist" Zemo comic fans are accustomed to.

"I just liked that he's so arrogant and elitist," Busiek says. "Whenever I wrote him, I was consciously thinking of Hans Gruber, the Alan Rickman character in Die Hard. His dialogue is so much fun."

Busiek says he found himself leaning into the "baron" aspect of Zemo as a way to distance him from his Nazi past while fleshing out the villain.

"The idea that he was brought up to believe he's one of the elite, that he deserves to rule the world because of his bloodlines and upbringing, give him a motivation that's got some texture to it — he's not just sold on himself, he's sold on his entire family history, and thinks we should bring back the days of feudalism," he says.

After dozens of schemes gone awry in Thunderbolts, Zemo has spent the past 20 years spreading his evil roots in the Marvel Universe, targeting the likes of Hawkeye, the Winter Soldier (Captain America #606-#610, 2010), and Falcon when he became the new Captain America (All-New Captain America, 2015). And, of course, when Hydra replaces Captain America with an evil clone in Secret Empire (2017), Zemo is right there. So, could Baron Helmut Zemo become a mainstay in the MCU?

"I don't think Zemo's been as memorable as he is in the comics — he was part of the Civil War movie, but he wasn't the exciting part," Busiek says. "But now that they're adding the visual and apparently have bigger plans for him, let's see where they go."

Put on your dancing shoes, 'cause Marvel decided to #ReleasetheZemoCut