FANGRRLtopia: Boob windows for what?

Today, in FANGRRLtopia, we're talking about superhero costumes. They aren’t always practical, nor do they always make sense. Take, for instance, nipples on Batman and Robin’s suits in the movie Batman & Robin. They aren’t needed, but at least they’re bulletproof nipples, and both Batman and Robin need that protection. Now imagine if their suits had cutouts just to show their actual nipples. While it could be aesthetically pleasing, one shot to the chest and both heroes are reunited with their slain families.

Provocative but foolish is what cleavage windows are — but, more importantly, the lack of support they provide is downright cruel since those with the heaviest chest often are given suits with them. In our utopia, poorly designed boob windows don’t exist because they simply don’t make much reasonable sense.

Let’s get into how unintentionally funny and absurd some of the suit designs are. The first one that will always come to mind is Power Girl’s suit. Her suit is described as having a cleavage cutout ... which is generous, to say the least. Call it what it is: a boob bay window. Kara Zor-L of Earth-Two might be an alien with superstrength, speed, laser eyes, and durability, but that doesn't mean she can just casually go without the chest support. How can anyone leap buildings in a single bound without fear of something not tightly secured popping up by the time they make it to the other side? That’s stressful!

To further affirm just how ridiculous it is that Power Girl has to fly around constantly one well-placed breeze away from a nip slip, let's remember her explanation in JSA: Classified #2. Power Girl’s parents didn’t slingshot her into space to land on Earth-Two so she could explain to her cousin that the cutout on her chest is there because she hasn’t earned a symbol yet. Girl, no. Not being able to fly has never stopped Batman from wearing a cape, so Power Girl not knowing what symbol to place on her chest doesn’t mean she has to leave the material cut out instead of just leaving it BLANK. As strongly independent as Power Girl is, her saying she wants the cutout because she likes how the breeze feels while flying faster than a speeding bullet is much more believable and relatable.

Another boob window begging for Cardi B's ”WHAT WAS THE REASON?” is Sue Storm’s early '90s suit. While it looks as though it might provide just a touch more support than Power Girl’s, it still screams doing a lot for the male gaze. Sue’s suit has a number-four cut out in the chest area. A boob peek-a-boo of sorts. So Power Girl left her chest bare because she felt like she hadn’t earned a symbol, but Sue has one and it’s cut out of the suit. Yes, this all makes complete sense and is extremely reasonable.

At least Power Girl has bulletproof skin and a shot to the chest wouldn't mean much, but that is not the case for Sue. Sure, she can create force fields, but why even bother when she could just not have a hole in the middle of her chest in the shape of a four. To think Sue looked Reed Richards right in the eye and said, “Honey, cut the four out of the chest, I really want a flesh-tone four.” It's actually quite hilarious, all things considered. She makes way too many visits to Atlanis to not have a full suit anyway. Maybe that’s how Namor likes it, though: already wet.

So, there’s the boob bay window, boob peek-a-boo cutout, and then there are the boob holsters. You read that correctly and it’s whatever you might be thinking ... but somehow worse. At one point, Starfire’s entire suit just consisted of these modified holsters that only existed to cover her nipples. Alien or not, no one has double-sided tape strong enough to keep whatever that creation was in place.

Maybe the density of an alien breast is lighter than that of a human, but even still, it's hard to believe they’re light enough to go without any kind of support. Similar to Power Girl, Starfire is doing a lot of flying. The number of bugs or just dirt that would wind up on her body would be disgustingly high. The guns the Punisher runs around with have more support than Starfire’s suit could ever have provided her. Imagine a villain's plans actually working out due to lower back pain or the contracting of a terrible rash from flying around in mess. 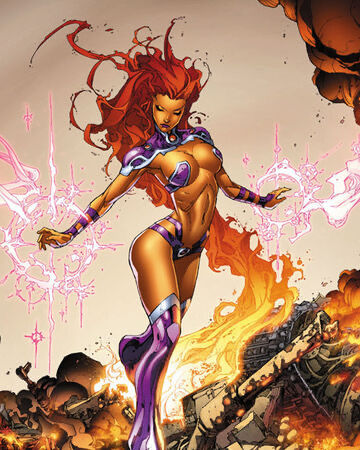 Now we also understand that it’s up to the wearer whether they want to have their business out. We fully, ahem, support the choice to do so. With that said, in our utopia, Savage X Fenty would team up with The Incredibles’ Edna Mode, who loves working with some top-tier material. Edna also knows how to make a sleek but sexy suit, especially if that’s something someone wants. She’s like the super suit whisperer, creating looks that are as aesthetically pleasing as they are supportive and functional. Edna did not one, but two suits for Elastagirl, both protected and showing off the wagon she drags around.

The point is that, in our FANGRRLtopia, Edna would create suits with cleavage windows that don’t leave everyone wondering how in the name of Galactus those breasts are not escaping like Arkham Asylum runaways after the first punch. Edna X Fenty for all your super suit needs.

47 thoughts we had while watching The Island

How Mr. Robot turned a dystopian landscape into a utopian finale