It took me a minute to become a Fantastic Four fan.

When I first dove into comics, I had several books that demanded my monthly attention. Marvel's flagship comic was not one of them.

Sure, I enjoyed the occasional FF comics I read, especially when Thundra and her unrequited love for Ben Grimm would be part of the storylines. But outside of the epic Reed Richards-Dr. Doom battle in the 200th issue, I never really believed the blurb above the title. To me, Fantastic Four was never "The World's Greatest Comic Magazine!" 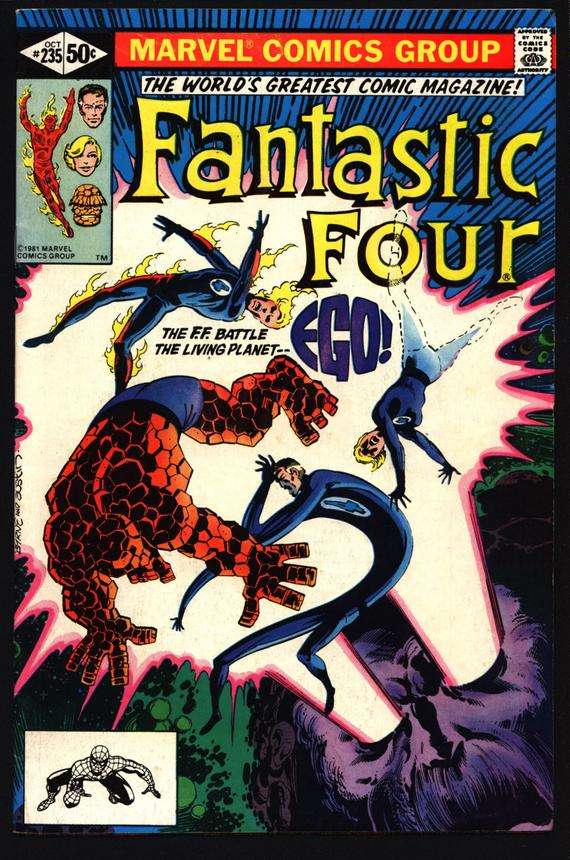 It should be fairly clear if you've seen some of my interviews with him for the video portion of the Behind The Panel franchise that I'm a huge Byrne fan. He's on my personal Mount Rushmore of comic book creators, and since he celebrated his 70th birthday on July 6, I felt compelled to focus this week's column on him. In particular, I wanted to discuss his sublime gift for getting to the essential core of a character. If you look at his body of work in his nearly five-decade career, much of it has been spent rebuilding and revamping heroes and villains. His celebrated relaunch of Superman may be the best such example, but She-Hulk, the Vision, Iron Man, Wonder Woman, and Namor the Sub-Mariner have all benefited from his mastery of the makeover. There is no one better at comic book rehabilitation than John Byrne.

For my money, his work on the Fantastic Four was peak Byrne Rehab. At the time he took over the book in 1981 with issue #232, he was the top guy in comics. His run on Uncanny X-Men with Chris Claremont cemented him as a superstar, and when given the chance to take over Marvel's First Family, he went back to basics. As he told me once — during our first interview, actually — the most important element to properly portraying the FF is to present them, first and foremost, as a family. It's a family that loves each other. Do they fight? Absolutely. But they will go to the ends of the galaxy for each other. Anyone who has read Byrne's legendary five-year run on the book understands that.

But it took me a bit longer than others to realize it.

The first Byrne FF comic I bought came nearly a year into his tenure. It was issue #242, and I grabbed it mainly because one of my favorite bad guys, Terrax, was on the cover. He had returned to Earth to force the FF to take on Galactus and threatened to ram the island of Manhattan into the Big G's ship if they refused. That issue had everything a new or, in my case, lapsed reader could ask for. We got a quick, concise setup of each main character, from Ben's eternal struggle to come to grips with being a creature others saw as a monstrous thing, to Johnny's personal life, and the gentle marital bickering between Reed and Sue. I don't know if anyone since has been able to capture Ben Grimm's inner torment as well as Byrne did.

He also tipped a cap to the franchise's glorious past, such as when Johnny Storm walked by the Bowery squat house where he had found the Sub-Mariner years earlier in Fantastic Four #4. Just as important, the greater Marvel Universe was represented by the appearances of the Avengers, Daredevil, and Spider-Man. There was an immense amount of story crammed into 21 pages, and none of it felt forced. It seemed... effortless.

And while it was the first chapter of a three-part epic that is (or should be) on everyone's shortlist of all-time FF stories, the comic didn't feel like an unsatisfying amuse-bouche. It deftly balanced quiet character moments with some colossal fisticuffs, such as when the Thing is pounded through the Baxter Building. Also, Byrne in just a few pages had helped Terrax regain his place as a world-threatening villain. The last two times he had popped up in comics, he had been bested by Rom the Spaceknight and... Dazzler. My love for the singing mutant heroine runs deep, but there's no way she should ever in two billion years beat a herald of Galactus. With this story, Byrne gave Terrax his mojo back.

In interviews then and since, the writer-artist has said his goal when he got the book was to take the Fantastic Four back to its roots. That meant evoking the spirit of the title from when Stan Lee and Jack Kirby were breaking ground each month with one new adventure after another. Those were the comics he read when he was a young fan, and you can sense Byrne's affection for the FF on nearly every page, much like it comes across with Professor Xavier's original mutants in X-Men: The Hidden Years. In many ways, Byrne's FF is the greatest fanfiction in history. He loves these characters; it was obvious when he gave me a tour of his studio and he talked about the rare FF original art on his walls.

His passion isn't reserved just for the heroes. The FF's rogues gallery regained its edge under his guidance, in particular Victor Von Doom. Byrne even managed one of the all-time great flexes in comic history when, in issue #258, he corrected a slight to Doom his old X-pal Chris Claremont had scripted in Uncanny X-Men #146, when Arcade lit his match on Doom's armor. The fact that Byrne used an entire page of an FF comic to undo one tiny moment of disrespect underscored just how seriously he took these characters. No one was dissing the FF's greatest villain on his watch!

By the time the Galactus trilogy capped Byrne's first year on the title, the Fantastic Four were firmly ensconced back at the top of Marvel's hierarchy.

Did he save the FF from cancellation? Nope. It wasn't in that bad shape. But he rescued it from something almost as bad: mediocrity. During his time in the captain's chair, Byrne revived the sense of galactic adventure and family dynamics that made the book so unique. He would shake up the lineups, make elemental changes to foes like Galactus and remind people of the four-color magic the FF could conjure.

That is his lasting legacy on that franchise. For me, all of that began with that one single issue and Byrne's mission statement:

What's your favorite story from Byrne's Fantastic Four run? Find me on Twitter/Facebook/Instagram and let me know. I can talk Byrne comics all day long!

It's a fan thing
Join SYFY Insider to get access to exclusive videos and interviews, breaking news, sweepstakes, and more!
Sign Up for Free
All Posts About
Comics
Features
Behind the Panel
Fantastic Four
John Byrne
Related Stories