Less than 48 hours after its intimate flyby of Jupiter’s largest moon, Ganymede, NASA’s intrepid Juno spacecraft has returned its first wave of stunning images of the icy satellite from a distance of just 645 miles above the etched, pock-marked surface.

Ganymede is not only the gas giant’s biggest moon, it’s also the most massive in the entire solar system, with a diameter greater than the planet Mercury. Galilean satellites represent the four largest moons of Jupiter — Ganymede, Io, Europa, and Callisto.

These remarkable shots were obtained via the probe’s JunoCam and were snapped during its closest pass on Monday, Jun. 7. The JunoCam imaging system had a narrow window of only 25 minutes to take these photos, long enough to capture five exposures before closing in on Jupiter for the 33rd time.

Juno’s scientific team will now scrutinize the images and compare them to those pics from earlier missions, watching for alterations in surface features since Ganymede was last photographed by Galileo two decades ago.

Another look at Jupiter's moon Ganymede from the #JunoMission’s June 7 flyby. Citizen scientist Kevin M. Gill processed this view from raw JunoCam images, which are available at https://t.co/N0QjWoBILL pic.twitter.com/VhSpvKypBF

There is speculation that Ganymede could actually support life, most likely in its 60-mile-thick subterranean ocean existing beneath a 95-mile crust of ice.

“Ganymede’s ice shell has some light and dark regions, suggesting that some areas may be pure ice while other areas contain dirty ice,” said Juno Principal Investigator Scott Bolton of the Southwest Research Institute in San Antonio in an official statement. “MWR will provide the first in-depth investigation of how the composition and structure of the ice varies with depth, leading to a better understanding of how the ice shell forms and the ongoing processes that resurface the ice over time.”

Here are a closeup and an enhanced-color view, both processed by Gerald Eichstädt.

Learn more about Ganymede and Jupiter’s other intriguing moons at https://t.co/zqwKtY2YMS

Juno already had a quick peek at Ganymede back on Dec. 26, 2019, when it delivered the first-ever photographs of its north pole, but this week’s flyby is the closest encounter of the huge moon.

“As Juno passes behind Ganymede, radio signals will pass through Ganymede’s ionosphere, causing small changes in the frequency that should be picked up by two antennas at the Deep Space Network’s Canberra complex in Australia,” said Dustin Buccino, a signal analysis engineer for the Juno mission at JPL. “If we can measure this change, we might be able to understand the connection between Ganymede’s ionosphere, its intrinsic magnetic field, and Jupiter’s magnetosphere.”

Juno has recently finished its main five-year mission surveying Jupiter, a situation that now sees the craft repositioned in a new, shorter orbit of the red-eyed planet. This trajectory will ensure that Juno gets close to two other moons of Jupiter during its final 42 orbits through 2025. 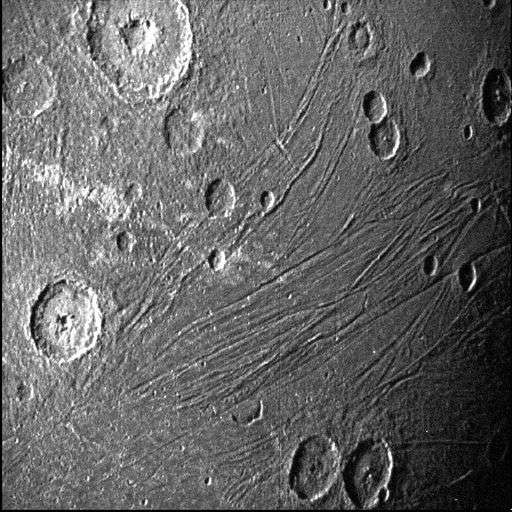 “Juno carries a suite of sensitive instruments capable of seeing Ganymede in ways never before possible,” explained Bolton. “By flying so close, we will bring the exploration of Ganymede into the 21st century, both complementing future missions with our unique sensors and helping prepare for the next generation of missions to the Jovian system—NASA’s Europa Clipper and the European Space Agency’s JUpiter ICy moons Explorer (JUICE) mission.”

It's a fan thing
Join SYFY Insider to get access to exclusive videos and interviews, breaking news, sweepstakes, and more!
Sign Up for Free
All Posts About
News
Science
Juno
NASA
space
Related Stories