More often than not, the villains of Blaxploitation films were predominantly white women who would harm other women, including the female protagonist, in their quest to uphold the systems they benefited from. Their presence in these stories often signified a lack of sisterhood — but, beyond that, given the racial dynamics depicted, a segregated sisterhood.

Granny Goodness, created by Jack Kirby, made her first appearance in Mister Miracle Vol. 1 #2. Most know her as the ruthless older woman who runs the orphanage on Apokolips like a daycare lady from Hell. Granny uses torture techniques and brainwashing to create some of Apokolips’ most fearsome warriors — most notably among them, her Female Furies. Her appearance could be considered to be devoid of sex appeal — almost always scowling,  a bulky athletic build, forever covered from neck to toe. Ultimately, this depiction serves to make her less sympathetic, because "pretty privilege" even exists in comics. Also, her name is Granny, and, as we all know, women of a certain generation are not supposed to be desirable and function best as bitter older women.

Of so many female villains throughout comics, Granny Goodness and her relationship with the Female Furies has always reminded me of a villain who would fit perfectly in a Blaxploitation film.

In 1973's Cleopatra Jones, Mommy (Shelley Winters) is a drug queen pin; she's also sadistic, a quality that Granny is known for. Mommy is also visibly sexually rampant, continuously flirting and making inappropriate and crude remarks to her female servants. Mommy has a crew of men who do her bidding for her, instead, and runs her organization with an iron fist, taking sh*t from no one.

No, Mommy doesn’t play at all, and neither does Granny Goodness. They instill fear into their subordinates, though their names would imply otherwise. When you hear the word "mommy" or "granny," you usually think of a caregiver. These two women couldn’t be further from the roles described in their names. They act no differently than their male counterparts, but ultimately, they are women and they're still vulnerable to the same patriarchal systems they uphold.

One of the villains from 1974's Foxy Brown, "Miss" Katherine Wall runs a modeling agency with her boyfriend that serves as a front for a prostitution ring they have in conjunction with a drug syndicate. She drugs the titular character played by Pam Grier at one point, keeping her alive in hopes that she’d be worth something in the sex slave trade.

Katherine aesthetically doesn’t scream evil on the surface, but she is as ruthless as the aforementioned women on both the page and the screen, perpetuating a system of women harming women. When they could be helping to dismantle the patriarchy, they’re protecting it in hopes of receiving their own sliver of power. 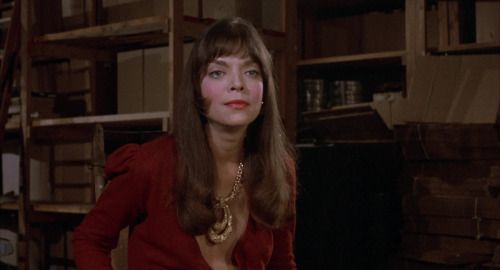 Unfortunately, there isn’t much backstory given for either Mommy or Katherine and their rise to the positions of power they have, and the same was true for Granny Goodness until recently. Previously, we only knew that she hadn’t begun as one of the higher-level residents of Apokolips. Instead, she was one of the Lowlies — a brutally oppressed peasant class — chosen to be trained as one of Darkseid’s elite soldiers known as the Hounds. Part of their training involved owning and taking care of a dog; Goodness named hers Mercy. Sadly, as the final step of her initiation into life as a Hound, she was told to kill her beloved pet. In response, she murdered her trainer instead. When Darkseid asked why, Goodness answered that "to have done otherwise would have robbed my lord of a most valuable asset." Darkseid decided to test this by ordering Mercy to attack — which forced Goodness to kill her dog after all. This secured her spot as one of Darkseid’s Hounds.

Little did Goodness know at the time that Darkseid's wide-ranging scope of blind obedience would ultimately include her. In the Female Furies miniseries, it’s revealed that Granny Goodness is a victim of on-the-job sexual abuse at the hands of Darkseid. She then internalizes it, turning a blind eye when Protector Willik sexually assaults one of her Furies, Auralie. The toxic thinking trickles down to the rest of the Female Furies as well until Big Barda finally wakes up and sees things for what they are, but it doesn't happen until after Auralie dies. Hurt people hurt others, and Granny Goodness is a victim who ended abusing others in the same way she was abused. It doesn’t justify her actions, but it brings some understanding. To think of the things Granny Goodness could have accomplished if she’d been able to stand up for herself and for her Female Furies in their time of need.

The same can’t be said for Mommy or Katherine, since they're technically closer to one-dimensional characters who serve a very specific role in their stories — but it’s still fascinating that a character as powerful as Granny Goodness frequently falls into the same tropes they did.

In a post-Dolemite Is My Name world, the Blaxploitation revival has room for Granny Goodness and the powerful women who get to take her down.

10 Black comic book characters coming to a screen near you

The treatment of queer women in Blaxploitation films