Some of the biggest stars from the Harry Potter films, spinoffs, and stage plays have reunited to narrate the marvelously magical stories found within the pages of J.K. Rowling's The Tales of Beedle the Bard.

The breakdown of wizarding fairy tales is as follows: "The Wizard and the Hopping Pot" (Davis); "The Fountain of Fair Fortune" (Lynch);  "The Warlock's Hairy Heart" (Isaacs); "Babbitty Rabbitty and her Cackling Stump" (Wright); and "The Tale of the Three Brothers" (Dumezweni).

As the uptight Hogwarts librarian, Madam Pince, Mortemore is in charge of narrating the introduction, while Law delivers "wise and whimsical notes" throughout as Professor Dumbledore.

The Tales of Beedle the Bard made its Wizarding World debut in the seventh and final Potter novel, Deathly Hallows. "The Tale of the Three Brothers" was used to teach Harry about three incredibly powerful magical objects (Elder Wand, Resurrection Stone, and Death's own invisibility cloak) that made him "master of death" and allowed for the ultimate defeat of Lord Voldemort.

However, the other stories written by Beedle (think of him as the Aesop or Hans Christian Andersen of the magical universe) are only ever mentioned in passing by Ron Weasley early in Book 7. It's a rather comedic moment in the plot since he thinks that the Muggle fairy tales we're all familiar with (like "Cinderella" and "Snow White") sound like illnesses to him. 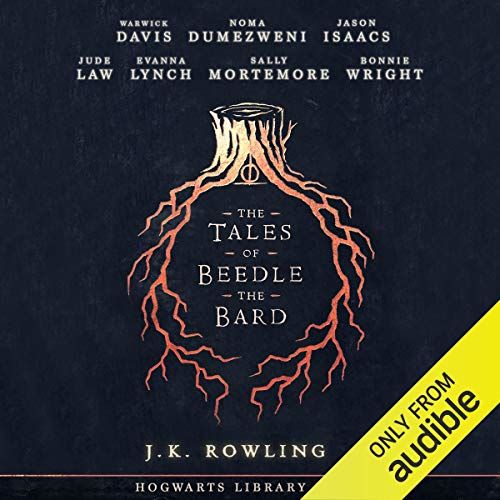 Rowling eventually created a fully-fledged collection of five Beedle yarns, but only a limited amount of books (handwritten and drawn by the author herself) were created for charity. Fans all across the world finally got to explore the five fables in the winter of 2008 when Children's High Level Group published a commercialized version that was sold by Scholastic and Bloomsbury.

Audible's audiobook version of The Tales of Beedle the Bard arrives via Floo powder Tuesday, March 31. You can pre-order a digital copy right here for $14.95.

It's a fan thing
Join SYFY Insider to get access to exclusive videos and interviews, breaking news, sweepstakes, and more!
Sign Up for Free
All Posts About
Movies
News
Audible
Harry Potter
J.K. Rowling
Jason Isaacs
The Tales of Beedle the Bard
Warwick Davis
You May Also Like
Recommended by Zergnet
Latest on SYFY WIRE