Heroes defend the portal city of Pan in Marvel's War of the Realms spinoff, Agents of Atlas

Spawned from the pages of Marvel's War of the Realms event series and fortified with the inestimable writing talents of Greg Pak (Planet Hulk, Firefly) and Jeff Parker (Batman '66, James Bond: Origin), the crusading superheroes of Atlas are resurrected in their own new solo series titled Agents of Atlas that strikes with its blistering premiere issue on August 7 — and SYFY WIRE has an exclusive look inside.

The original Atlas lineup first debuted back in 2006, created by Jeff Parker and Leonard Kirk, and gathered a whole host of heroes once introduced in the 1950s in the pages of Marvel's previous iteration, Atlas Comics. Former S.H.I.E.L.D. agent Jimmy Woo came out of retirement and combined with his crimefighting friends Namora, Venus, Marvel Boy, Gorilla-Man, and M-11 to inherit the Atlas organization previously led by his dad, Yellow Claw.

Now after a fresh team led by Amadeus Cho and Kamala Khan debuted this spring in a 4-issue New Agents of Atlas miniseries tie-in to War of the Realms, written by Grek Pak and illustrated by Gang Hyuk Lim, the energetic Asian superheroes are back with their own monthly title to protect all corners of the Marvel Universe.

Agents of Atlas #1 showcases the dynamic interior art of Nico Leon and Carlo Pagulayan, and features a double dose of the reinvigorated roster as Amadeus Cho, Silk, Shang-Chi, Wave, Jimmy Woo, and all the Atlas favorites defend the cross-Asian portal city of Pan against the science-magic threat of one of Marvel’s all-time classic villains. It's sensational science-magic superhero mayhem combined with young and old heroes from multiple lands clashing with each other, battling monsters, and potentially saving the planet along the way. 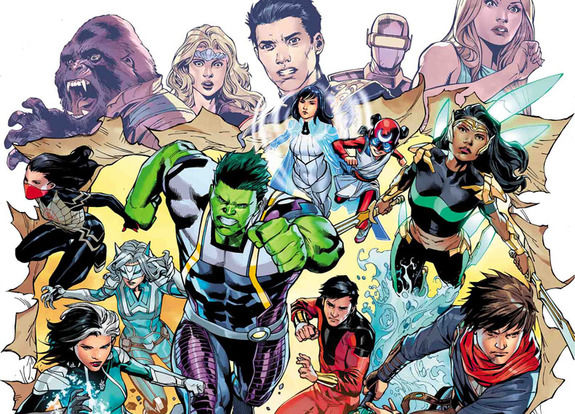 In Parker's nostalgic back-up tale, we revisit the original Agents of Atlas by following Namora, M-11, Gorilla Man, and Marvel Boy into an all-new clandestine mission.

"I was happy enough that Agents of Atlas was coming back in a new form with friend/writer I admire Greg Pak on board, and then Mark Paniccia asked if I’d do a back-up story showing us what the original Atlas team have been up to," Parker tells SYFY WIRE. "So that was an easy thing to agree to. I sat down and read a lot of our stories again to get back in the right headspace and so I could 'hear' everyone’s voices as I write."

Atlas has shown up a couple of times in Marvel series since their original 2006-2007 run, but Parker wanted to pick up right from where they ended it with Return of The 3-D Man, with Del part of the permanent team.

"And we also briefly reference that Bob (Marvel Boy/The Uranian) really looks like an extraterrestrial when you get through his mental illusion wave," Parker adds. "Gorilla-Man still talks smack and M-11 still death-rays things, so they’re otherwise as you remember them. The real treat was teaming again with my old partner Carlo Pagulayan, he is simply a creative force. There’s a scene where Venus uses her powers where he went far beyond anything I imagined, I look forward to hearing the reaction on that. This book is jam packed with greatness, pick it up and enjoy!"

Marvel's Agents of Atlas #1 hits comic shops today and spotlights a main cover by Jung-Geun Yoon and variants from Carlo Pagulayan, Skottie Young, Mico Suayan, and Leinil Francis Yu. Bolt into our exclusive look inside in the full gallery below, then tell us if you'll join the resurgent crusaders in their Asian quest.

Heroes defend the portal city of Pan in Marvel's War of the Realms spinoff, Agents of Atlas