At the peak of their civilization, Krypton's people believed they were the most advanced species in the universe. And in many ways they were right. Kryptonian scientists had dreamt up all kinds of technological wonders, from genetic engineering to the terraforming of entire worlds. So, how did an entire civilization of superbeings miss the fact that their own world would be destroyed, literally right under their feet?

That’s the question writer Claudia Gray (Star Wars: Bloodline, Evernight) sought to explore in House of El Book One: The Shadow Threat. The graphic novel, out today, is the first in a series of three books Gray and artist Eric Zawadzki are working on. Gray tells SYFY WIRE their team is currently working to finish up the final installment of the three-part series early next year.

Exploring life on Krypton at the brink of disaster, the House of El series focuses on two young members of the planet’s caste system — Zahn, an elite raised in privilege, groomed for political leadership, and Sera, a fearless and dedicated soldier in Krypton’s army. Change is in the air on Krypton as powerful quakes are shaking the planet and uprisings among the lower castes are increasing. As the leaders of Krypton assure the people that nothing is wrong, the planet’s top scientists Jor-El and Lara are feverishly working on a solution that could transform Krypton.

House of El provides a fresh look at the people of Krypton and their dying planet, all while aiming to answer how it all could have gone so wrong on Superman's homeworld. 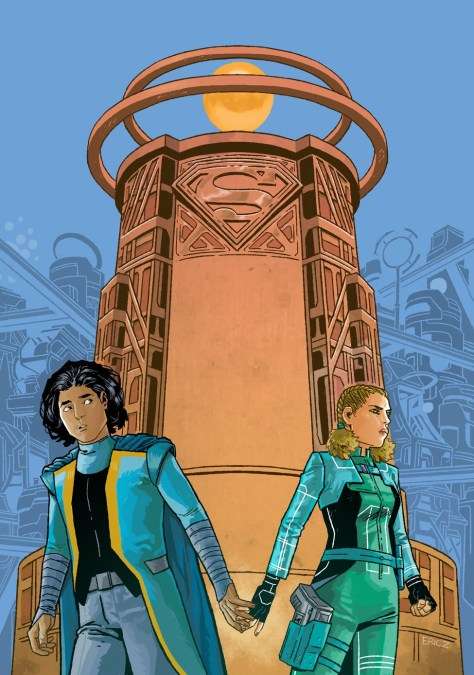 “I’m a huge fangirl and I’ve written so many alternate fanfics, so I love the idea of ‘What if we start it another way?’” Gray says. “For other fans who are into that, this is a completely new start and a fresh perspective on a story that they love.”

As Zawadzki notes, although there are a few stories that have dealt with what happened before Kal-El was jettisoned toward Earth, the mythology has largely been left untapped.

“Most of the time this is the first 15 minutes of the movie or first few pages of a comic,” he tells SYFY WIRE. “It’s a privilege to expand this world.”

House of El is the first foray into comic books for Gray, who has written more than a dozen young adult books. After an initial pitch for a separate project didn’t pan out, Gray recalls, DC contacted her about utilizing some of her ideas for a Superman story.

“How often do you get to start a comic career with Superman?” she says. “Superman: The Movie was one of the formative experiences of my childhood. But, it’s sort of like saying once you’ve learned to ride a bike, ‘Now go win the Tour de France.’”

In the more than 80 years since Superman first graced the pages of Action Comics #1, a cadre of writers and artists have revisited Kal-El’s origin story, delving into the strange history of Krypton in stories like “For the Man Who Has Everything,” “The World of Krypton,” and “The Man of Steel.” But, Gray says, both she and DC wanted a fresh start with House of El.

“We were actually told don’t [look back at previous stories] too much,” Gray explains. “You’re not beholden to everything that came before. Since this is a standalone and doesn't have to rely on other canon, we were able to really start from scratch. It was incredibly liberating.”

Zawadzki, meanwhile, approached creating this new Krypton from a somewhat different angle. Initially, he tried to research Krypton as much as possible, dipping into John Byrne’s "'80s stuff" and the more recent work Gene Ha has done with Superman. But, he says, putting his own spin on Krypton and its people was important. Instead of mirroring Superman’s “spandex look” in depicting the citizens of Krypton, Zawadzki wanted to deviate with a more fashion-focused vibe. The artist says he loved drawing the architecture of Krypton the most.

“I could have drawn the vast cityscapes for weeks,” Zawadzki says. “It’s something I really enjoy, but you have it get it all in on schedule.”

While House of El serves as a great entry point for new comic book readers, it’s also a compelling study of how the rigidity of Krypton society led to disaster. In brainstorming for House of El, Gray says she found the idea of genetic engineering, a major aspect of Kryptonian society, fascinating and wanted to “double down” on the idea.

“The central question, of course, is why do people from this incredibly advanced society not know their planet is about to blow up? It is something they can know and they do know it. Jor-El, in fact, knows it. So, from there, it presents the idea — what if they can’t see it,” Gray says. “They’re so specifically designed, they're the hexagonal peg for the hexagonal hole. Anything that doesn’t fit into this very crystalline structure of their society, it might as well not exist as far as they're concerned. They can’t see it and can’t see it as important, so it’s just this example of how they’ve specialized too much.”

That’s where the new characters Zahn and Sera come into play, Gray adds.

“There’s a couple of absolutes. Krypton will blow up and Kal-El will be one of only a few to escape,” she says. “So, focusing on these new younger characters is very freeing. We can see Krypton through new viewpoints and there’s this added poignance they’re both younger and we all know they’re about to have their futures stolen away by those who can’t face the truth.”

It's a fan thing
Join SYFY Insider to get access to exclusive videos and interviews, breaking news, sweepstakes, and more!
Sign Up for Free
All Posts About
Comics
Features
Claudia Gray
DC Comics
House of El
Interviews
Superman
Related Stories