With the Netflix live-action adaptation of Mark Millar and Frank Quitely's generational superhero comic series, Jupiter's Legacy, getting widespread recognition and introducing mainstream audiences to the complex saga of the Sampson clan, caped crusader fans worldwide were eager for more.

Sadly, Netflix cancelled a second season shortly after the debut run aired in May. Now Image Comics is forging beyond Season 1 with a new Jupiter's Legacy miniseries — and SYFY WIRE has an exclusive five-page peek to share alongside a never-seen variant cover by Turkish artist Ozgur Yildirim. 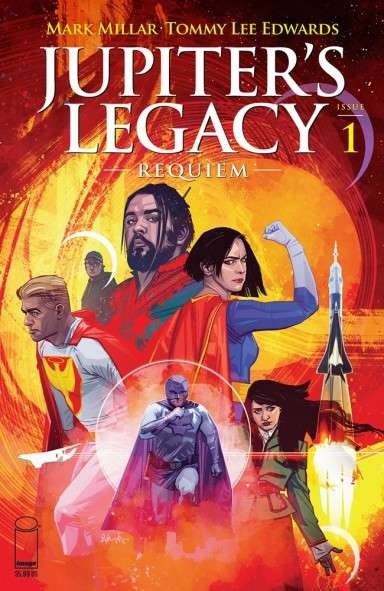 It's a rousing double-sized issue that represents the next (and final) chapter in Netflix's global sensation as the Scottish author returns for an unsettling sequel to one of his most acclaimed creations.

In this special premiere issue, Chloe and Hutch have officially tied the knot and are now blessed with more offspring. The valiant superheroes are continuing to work together in harmony with humanity and trying to create a utopian world.

But something is certainly rotting in the Garden of Eden as the Sampson family gets torn apart and more uncanny secrets of the Netflix show's mysterious remote island begin to be revealed.

"This is the big one. Jupiter’s is my magnum opus," Millar tells SYFY WIRE. "The biggest thing I’ve ever attempted and it’s been 10 years work. We had the Quitely series and the story in the past with Wilfredo and this completes the trilogy, a massive 300-page epic about the children of Chloe and Hutch and the mystery of not just the island you saw in the TV show but also all human existence.

"I’ve never been as proud as I am with anything I’ve ever done. Tommy Lee Edwards has been the perfect partner. Get ready for your new favourite book as we finish this story off!"

Now take flight into our exclusive five-page look at Image Comics' Jupiter's Legacy: Requiem #1 (Jun. 16) in the full gallery below.

Report: Jupiter’s Legacy beset with pitfalls before, during, and after production

Jupiter's Legacy: What you need to know before binging Netflix's new superhero drama