Our poor planet has endured billions of years worth of cosmic abuse as its crust was regularly pummeled by eons of space rocks smashing into Earth's evolving prehistoric surface.

Besides the colossal Chicxulub crater in Mexico's Yucatan Peninsula caused by the extinction-level meteoric event contributing to the dinosaurs' demise, South Africa's record-holding Vredefort crater, and Canada's Sudbury Crater, our home shows the jagged scars of nearly one hundred strikes measuring one mile in diameter or more. While mostly of an immeasurably destructive nature, ginormous space debris could also have carried the seeds of life from some distant galaxy while remaining hidden from modern eyes in the intervening centuries following their collision with Earth.

Now, in a new report published last week in the Proceedings of the National Academy of Sciences, a team from Singapore's Nanyang Technological University, Thailand's Ministry of Natural Resources and Environment, and the University of Madison-Wisconsin, have pinpointed ground zero of a long-sought punishing meteor hit that happened approximately 790,000 years ago. The meteor exploded with such force that the detonation blanketed 10% of the planet with gleaming black and green blobs of rocky debris called tektites.

This trail of scattered tektites — resulting from the liquefication of rocks blasted by the meteor then cooled into glassy souvenirs — can often be traced back to the source landing zone. For nearly 100 years, scientists have known of the hypothetical existence of this colossal crater somewhere in the eastern portion of central Indochina, where tektite concentrations were greatest. But they could never discover the precise location until now.

Previous calculations as to the size of the ancient crater were believed to measure over 300 feet at the top of the rim, and ranged in diameter somewhere from 9 to 186 miles.

According to the study, the team offered up stratigraphic, geochemical, geophysical, and geochronological evidence that the enormous mystery crater lies buried beneath a large, young volcanic field in Southern Laos on the Bolaven Plateau, lurking just under a layer of cooled volcanic lava encompassing nearly 2,000 square miles.

Searching below the lava's surface by taking measured gravity readings at 404 locations near the summit region of the volcanic field for potential candidates, the crew's finished gravity map revealed a region "of particular interest" with a severe gravitational anomaly, a subsurface area less dense than the surrounding volcanic rock. Official measurements hinted at an elliptical, "elongated crater" sizing up at over 300 feet thick, about 8 miles across, and 11 miles long. 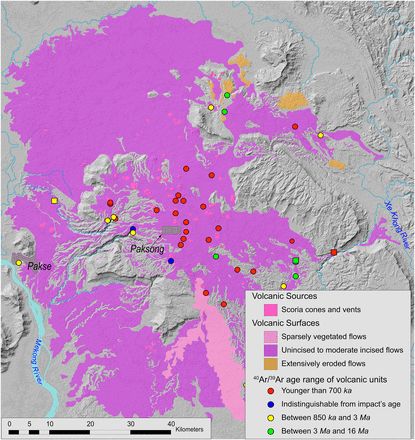 Together, these solid clues provide strong evidence that this rubble of volcanic rocks burying the impact site is indeed the previously unknown source crater of the vast Australasian tektite-strewn field, perhaps solving yet another Earthly mystery caused by the unimaginable forces that helped shape our complex biosphere and geological record.

A bright spot on the Moon