Welcome back to Important Toy News, the SYFY WIRE column that shows you a week's worth of amazing new playthings, collectibles, shelf candy, and tokens of joy. Everyone wins! Join me, your resident toy journalist, as we start our geeky toy-hunting journey by showing everyone this week's hotness in toy collecting. And this week, not only are we getting even more Star Wars toys of the Child (aka Baby Yoda) from the amazing Disney+ show The Mandalorian, but the world is just a giant dumpster fire. Again! 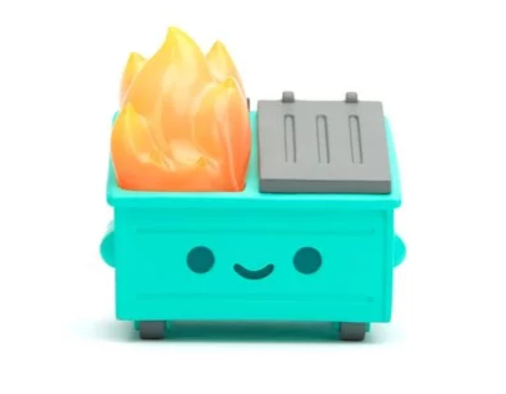 The year was 2019, and San Diego Comic-Con was approaching. A seemingly harmless little resin toy was discovered by Toy Wizards on the unofficial SDCC blog. And said coverage of that little Dumpster Fire resin toy thus unleashed a viral sensation. People wanted that toy so badly and they just couldn’t have it, because artist Truck Torrance of 100% Soft was only selling 50 pieces per day for all of SDCC.

But now, my friends, your patience has been rewarded. This resin toy is now vinyl, and it is on sale now at Entertainment Earth. This material swap not only makes it more of a traditional toy, but brings the price point down to only $22. You can preorder this bad boy today, and it will ship your way February 2020.

What at first seemed like zero toy representation has now become the most adorable and welcome snowballing boulder of cuteness that I ever wanted to crash into my heart, wallet, and toy shelves. I'm not evening kidding, because this is breaking toy news. Today, Disney/Hasbro unleashed six new Baby Yoda toys onto the internet, and they are available for pre-order today! Funko and Mattel may have announced their toys first, but Hasbro followed up with a full deck of awesome.

Now, I'm sorry to say it, but these pieces all have a shipping date of May 2020, which is the same date as the previous toys we've showcased. Unfortunately, there will be no Baby Yoda for the holiday season. Regardless, let's check out what we can order! We have The Child 7 1/2-Inch Electronic Plush Toy for $24.99, The Child 6 1/2-Inch Action Figure for $19.99, Baby Bounties Hold Me and Ball Mini-Figures for $15.99, Star Wars The Black Series The Mandalorian The Child Action Figure for $9.99 (WANT!), Baby Bounties Soup and Blanket Mini-Figures for $15.99, and the Baby Bounties Frog and Force Mini-Figures for $15.99. You can order all of these right now on Entertainment Earth, Shop Disney, or where your favorite collectibles are sold.

Wrestling toys are enormously popular. From the traditional WWE toys from Mattel over to the New Japan Pro Wrestling, it seems like toy collectors are wrestling-crazy. Well, now a very classic wrestler is being added to the ring. André the Giant: The 8th Wonder of the World! — one of the most recognized icons of the 20th century, thanks to his exploits in the wrestling ring and on movie and television screens. The André the Giant Ultimate Figure is 8 inches tall (an inch taller than other Super7 Ultimate Figures), highly articulated, and fully posable. It will come packaged in a deluxe slip-case-style box that presents Andre in all his larger-than-life greatness. This made-to-order release is open to pre-order now and will close on Tuesday, Dec. 31. They cost $45 and can be pre-ordered on Entertainment Earth.

Speaking of Super7, the good people over there are presenting the world with a gift we don’t deserve: legitimate Conan the Barbarian figures from the 1982 movie. Guys, think about it: We are getting figures from a movie that came out in 19 freaking 82! We need to be grateful that the Toy Gods smiled upon us! And smile they did. I never thought, when I watched this movie as a kid in ... like, yesterday ... that we would get action figures from this franchise! To get the likeness of James Earl Jones and Arnold Schwarzenegger and the two bodyguards Thorgrim and Rexar is amazing, absolutely amazing. They cost $45 each and can be ordered on Super7’s official website.

It’s time for one of our favorite Toy News segments — Super Hero Toys! And we’re kicking off with a gorgeous piece from Japanese toy maker Kotobukiya. Available for pre-order for $159.99 and a ship date of June 2020, the Women of Marvel line (part of Kotobukiya’s ArtFX Premier series) shines a spotlight on popular female characters within Marvel. Silk, the second to join this new line, stands in at 1/10 scale and has been perfectly sculpted to the finest detail. The window that is connected to the base uses materials similar to a magic mirror in order to replicate the shine and reflection of a person that can be seen from a real window.

This next one is so incredibly beautiful, and it kills me that it is sold out online. As described on the Hot Toys website, their “brand new 1/6th scale Spider-Man (Iron Spider Armor) collectible figure, inspired by the Marvel’s Spider-Man unique take on the armor, will continue to expand your favorite Spidey collection! Incorporating distinct elements of Tony Stark’s Iron Man design, this Iron Spider Armor is an awesome piece of battle tech modified with extra details while staying true to its comics origins and the video game’s fresh spin on it.” If nothing else, I just love the color scheme, because red and gold make me feel the tingles.

Last in line for Super Hero Toys, we have an entire new wave of Marvel Legends figures announced from Hasbro! It’s the Black Widow Wave 1, which is also the Crimson Dynamo Build a Figure. The individual figures will arrive in stores in March 2020 for about $19.99 each, but if you want to, you can order the entire wave through BigBadToyStore for $159.99. The wave includes Black Widow, Taskmaster, Yelena Belova, Winter Soldier, Spymaster, Crossbones, and Red Guardian. Each figure is 6 inches tall, comes with accessories, and is fully articulated.

We’ve reached the end, my toy-loving friends, but we couldn’t wrap up this issue of Important Toy News without mentioning Transformers! Freshly announced over the weekend at Dortmund Comic Con in Germany, Hasbro is adding three new Bayverse Transformers (officially known as the "Studio Series") to its portfolio.

The characters upcoming are Bumblebee (who transforms from robot to Jeep mode), Roadbuster (who transforms from robot to Chevy Impala), and Shatter (who goes from robot to Decepticon jet). All of them will be released in April of 2020. And seriously. Whether or not you’re a fan of the studio series, look at the bright side here — these are only $20! Which means you can have like … I don’t know, more toys! And that’s what we’re here for in the end, right? Exactly — more toys.