Welcome back to Important Toy News, the SYFY WIRE column that shows you a week's worth of amazing new playthings, collectibles, shelf candy, and tokens of joy. Everyone wins! Join me, your resident toy journalist, as we start our geeky toy-hunting journey by showing everyone this week's hotness in toy collecting. Okay, I know, I know — we sure have been covering a lot of Star Wars toys recently, right? And you know what, I really did have full intentions of mellowing out on it, even if this recent wave of them has been so damn cool.

But then a little certain something changed everything. That's right — Baby. Yoda. Toys. Not just one, but three new toys were announced! In fact, a funny thing happened with those Baby Yoda toys. Just two days ago, a listing on Walmart went up with news that an 11-inch vinyl-headed plush toy of the Child from The Mandalorian was available for pre-order, with a ship date of May 2020. Before most people could order it, the listing went down.

Fortunately, by the afternoon, websites like BigBadToyStore and Entertainment Earth had put up the toy for sale, but for a moment there the internet experienced a collective WTF moment. And while this may seem trivial to non-toy-junkies, the fact that this plush toy is made by Mattel and not Hasbro is definitely an interesting detail. I really feels like that Baby Yoda could singularly make Mattel the richest toy company in the world if they were allowed to release it ASAP, but it won't be out until March 2020 (better than the previously quoted May!) and will cost $25.

Last on the list for Mandalorian toys (this week, at least) are from the Star Wars Vintage Collection. Now available for pre-order (all about $12.99-$14.99 each) are Mando himself, Cara Dune, and the Remnant Stormtrooper figure. These are all in the classic Kenner scale, which is 3.75 inches. They all come with an accessory. I just love the rotting stormtrooper costumes. Seriously, let's get rid of all "battle damage" and replace it with post-Empire rot. And may I take a moment to express my love for Cara Dune? Now, this is a warrior babe character I want to follow!

Moving on, let's open up a new segment I call "Tiny Toys!" And for this new spontaneously created situation, we're going to kick off with Playmobil's up-and-coming Back to the Future DeLorean set. If you saw how fast the Playmobil Ghostbusters set sold out, get in line for these. So far, we only know the main DeLorean set comes with Doc Brown in a nuclear suit and Marty in classic '80s gear. Not to mention a so-crazy-detailed DeLorean you will believe cars can fly. Other upcoming items include a two-pack '60s set with Doc Brown in jacket with newspaper and Marty in "Enchantment Under the Sea" dance suit and guitar.

Next up in our "Tiny Toys!" segment is the semi-leaked LEGO DC Minifigures line. And by leaked, I mean that a Japanese retailer listed them and it is unsure whether the world was ready for their glory. Included in this upcoming line of Mini Figures are Joker (Frank Miller), Rebirth Superman, Cheetah (Classic), Cyborg (Teen Titans), Bumblebee (Teen Titans), Wonder Woman (1966), Mr. Miracle, Aquaman, Green Lantern (Simon Baz), Classic Sinestro, Bat-Mite, Batman (Detective Comics #1), Huntress, Golden Age Flash (Jay Garrick), Metamorpho, and Stargirl.

And last in our lineup of "Tiny Toys" are Kidrobot's newest addition to its series of Blind Box vinyl mini-figures. It's the Adventure Time Fresh 2 Death Blind Box Mini Figure Series. Each box costs $10, and they are available for purchase today. Kidrobot states that "The Land of Ooo's favorite residents Jake the Dog and Finn the Human are joined by new twists on fan-favorite friends like Princess Bubblegum and Marceline and all-new characters like Peppermint Butler and Lady Rainicorn." Each of these comes foil-bagged in a blind box package to deliver a mystery surprise with every open! Start your hunt for all 17 of these collectible 3-inch-tall figures today and add to your collection to guarantee that the fun never ends! 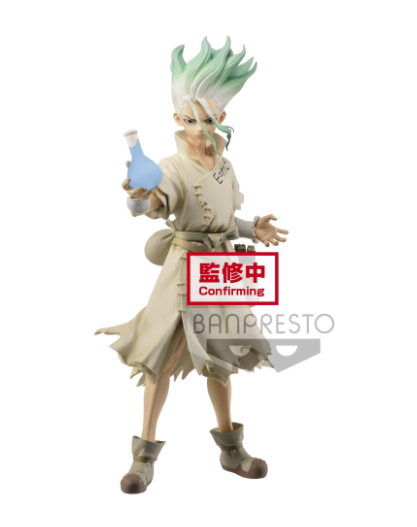 Oh what the hey, we're on a roll, so let's knock out three more radical figures in a segment we're calling "Super Cool Action Figures." Let's kick off with an anime toy, shall we?! The new hit anime/manga combo Dr. Stone finally has its first toy. Created by Banpresto, the figure is of the "doctor" himself, Senku Ishigami, and this static statue (or should we say petrified?) figure stands tall at 7.5 inches. Senku will be released by Banpresto in June 2020. He costs $21.99 (that's actually a fantastic deal) and can be preordered today directly from Crunchyroll. Also, is it worth noting that his color palette scheme is the same as ... Baby Yoda's?!

Coming soon from the ever-delicious Storm Collectibles is a Mortal Kombat Sub-Zero figure that is swoon-faint worthy. This figure is so damn gorgeous, I can hardly deal. No, but really- Mortal Kombat has consumed my heart. I love the Scorpion figure from Storm, and now the Sub-Zero is owning my soul. The usual size range for Storm figures is about 6-7 inches, and the price range is $85-$95. We will see what Storm Collectibles ends up charging for its Mortal Kombat Sub-Zero figure.

We've reached the end, my toy-collecting friends, but we couldn't call this Important Toy News without including a Teenage Mutant Ninja Turtles toy, right? And our buddies over at Mondo have a real lovely treat. It's a TMNT Comic Book style Michelangelo! The toy is described as: "Michelangelo, the laid-back partier of the Teenage Mutant Ninja Turtles, is available in 1/6 Scale! Based on the original Eastman and Laird comic book, Michelangelo features 25+ points of articulation, interchangeable heads & hands, with weapons & accessories taken right from the pages of the comic book!" He comes with the Classic Comic Red Mask Head, Cartoon Orange Mask Head, 2 Nunchaku, 5 Interchangeable Hands, 2 Four-Point Shuriken, 2 Eight-Point Shuriken, Grappling Hook and Cord, Triceraton Blaster, Belt, Lil Orphan Alien, and the Pre-Mutation Baby Michelangelo.

Baby Michelangelo! Hear that, fans? You can still have your Baby needs met and don't have to wait for Baby Yoda to come out next year! Just stick him in a tube of purple ooze and re-enact the cartoon open. Or just … you know … buy the toy from Mondo for $85.