Important Toy News: Beetlejuice gets sexy and this Stan Lee action figure will make you cry

Welcome back to Important Toy News, the SYFY WIRE column that shows you every new and amazing toy this week from here to the threshold of the universe. Join me, your resident toy journalist, as we discover new collectibles, drool over our neat grail items, justify our absolutely necessary impulse purchases, and make sure everyone in our lives knows that Marvel Legends' 80th Anniversary Comic Edition of War Machine is not the same as the Avengers: Endgame Marvel Legends War Machine, duh.

While we may be past Force Friday, which was last week, that doesn’t mean we can’t celebrate the new hotness in Star Wars toys. And we’re going to kick off with those very beautiful, very premium, and very wallet-crushing beauties over at Hot Toys.

After the stories of Jango and Boba Fett, another warrior emerges in the Star Wars universe. The Mandalorian is set after the fall of the Empire and before the emergence of the First Order, and will follow the travails of a lone gunfighter in the outer reaches of the galaxy, far from the authority of the New Republic. In anticipation of the first-ever live-action Star Wars series on Disney+, Hot Toys announced the 1/6th scale collectible figure of the titular Mandalorian. He has an MSRP of $234.99 and can be pre-ordered today from Toy Origin. Hot Toys also revealed the 1/6th scale IG-11 collectible figure for Star Wars fans! He costs $239.99 and can be preordered today as well. The highly-accurate IG-11 collectible figure features a highly detailed mechanical body with great articulations, skillfully applied weathering effects, two blasters, and a desert-themed figure base. 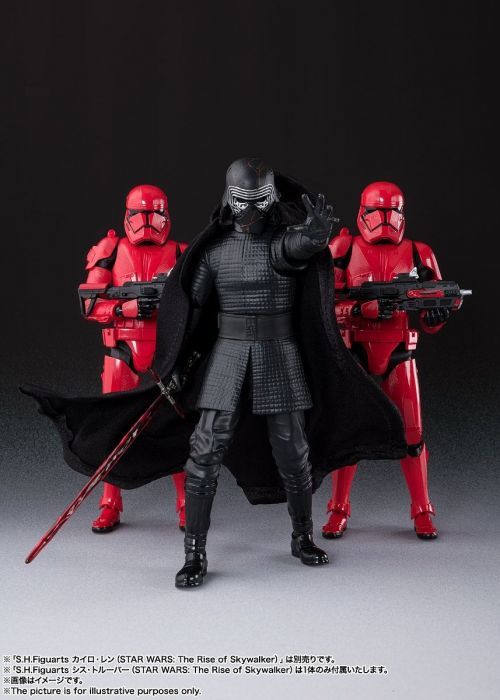 But if these prices are a little too… amped… for you, let me introduce you to three new beauties from Japanese toymaker Bandai, creators of most things good, and those tasty, tasty, S.H. Figurarts action figures. All of these Star Wars: The Rise of Skywalker action figures are ready to take your money right now at HobbyLink Japan. We have a Sith Trooper, Kylo Ren, and Rey in this wave. They will ship in November and can be ordered now for $60 apiece. 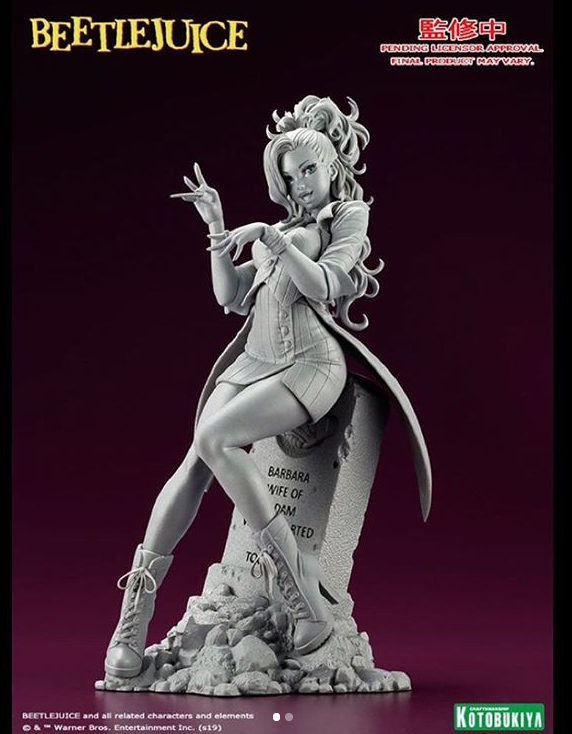 Speaking of Japanese toys, Kotobukiya showed off a few prototype goodies last week during New York Comic Con. All of these pieces are from their Bishoujo line, which is sort of a cute, anime-style, girlie version of different characters from pop culture. First up, they showed off an unpainted Beetlejuice statue. Picture it — cute, girly Beetlejuice without the rotting teeth and hair. I’m really hopeful that Kotobukiya will go full throttle and give the girl some face paint for that qualified “I’ve seen the Exorcist 167 times and it keeps getting funnier every single time I see it” kind of look. Also teased during NYCC was a Pennywise the Clown Bishoujo statue, but the artwork was just a drawing of a black silhouette and not the piece itself.

Additionally, Kotobukiya revealed its My Little Pony Rainbow Dash reimagined as a teenage girl statue. Rainbow Dash will be the newest in the Bishoujo line, as Rarity, Pinkie Pie, Twilight Sparkle, and Fluttershy already exist and are in various stages of in-stock, sold out, and available for preorder. You can check out their prices and stock right here.

Oof, that was a lot! But you know what? If we are breathing, then we can keep collecting. And we’re going to bring the hammer down by focusing on Superhero Toys for the rest of this column. Sounds good? Heck yes, it does! Which is why we are going to jump right in while our hearts are pumping and our cheeks are flushed with love-love power. And who better to project these weird feelings of toy devotion onto than the irreplaceable Gambit from X-Men?!

Seriously, I am wowed with this action figure. Mezco Toyz knocked it out of the park with this one. Like many breathing X-Men fans out there, my eyes are always glancing over in coy admiration when Gambit is in the vicinity. And this one is good. It’s really good. Available for preorder now with an MSRP of $85, this beautiful figure will ship between June and August of 2020. The One:12 Collective Gambit is outfitted in a black mission suit with an X-Men issued armored vest and removable leather-look overcoat. Complete with two head portraits, the master of kinetic energy comes complete with a bo staff and a variety of throwing cards and throwing card FX.

Sticking with Mezco Toyz, they also revealed a Classic Wonder Woman figure, also from the One:12 Collective line. The One:12 Collective Wonder Woman – Classic Edition comes prepared for battle, outfitted in reinforced torso armor and trunks with star pattern detailing. The unconquerable warrior wears a cape with an integrated posing wire that attaches via a clasp at the neck. Wonder Woman comes complete with weaponry fit for the Princess of the Amazons, such as the Sword of Athena and Lasso of Truth, which can be held on her belt, a spear, a battle axe, and a shield. Wonder Woman has an MSRP of $90.00 and can be preordered today. She will ship November 2019-January 2020. 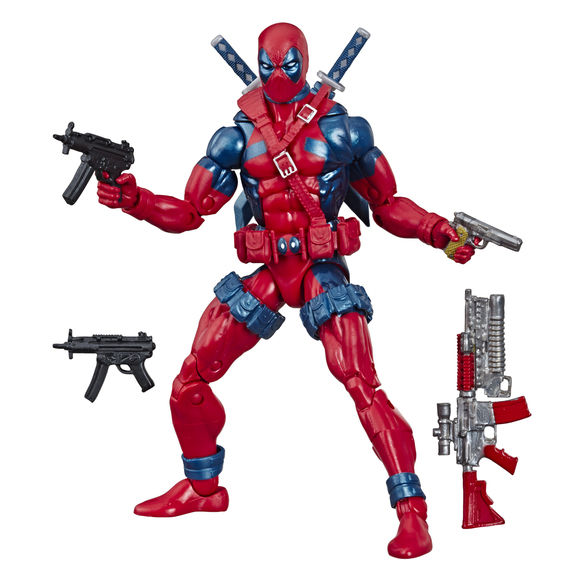 Let’s talk about some Marvel Legends, shall we? In a move that is thoroughly pissing off some fans, Hasbro and Marvel made a decision to have a European convention exclusive action figure. The figure they chose to create? Why, it’s Deadpool!

The exclusive Deadpool figure, with a color scheme and design that hearken back to his first appearance in New Mutants #98, will be available at MCM London Comic Con and Comic Con Paris before arriving for general sale via HasbroPulse on November 4, 2020. And sure, it will probably sell out in five minutes like most of Hasbro’s convention exclusives-turn-website-pieces, but at least you have a slight bit more of a chance to own the thing instead of having to hitchhike to Europe or something.

We’ve reached the end, my toy-collecting friends, and we’re going to scope out the last of the Marvel Legends figures that were revealed at New York Comic Con. Because really… let’s talk about that Stan Lee figure. Upon sight, I’m choked up and want to cry. He’s just such an adorable mensch and hero to so many people. I mean, just stick him harmlessly in the background of every Marvel scene you create with your figures and you’ll have a billion hours of play ahead of you. Just exclaim, "Excelsior!"

The 6-inch figure will retail for $24.99, while the other figures announced at the show (Doctor Doom, She-Hulk, blue and gold Deadpool, Sunspot, Warparth, Human Torch, Invisible Woman, Mr. Fantastic, and Thing) will each cost $19.99 and can be found at major retailers everywhere come Spring 2020.