Welcome back to Important Toy News, the SYFY WIRE column that brings you all of the latest and greatest in toy culture. Learn what's out there in the toy and collecting world, and see how fast you can go broke making that toy collecting monster grow. We have a lot to cover this week, so let's dive headfirst into that toy box...

Nickelodeon's SpongeBob SquarePants is celebrating its 20th Anniversary this year, and wow, what a wild twenty years it's been. Alongside other pop culture mainstays, SpongeBob has managed to permeate all corners of pop culture, from apparel to clothing to household objects to now meta toys based on memes!

As I first reported on Toy Wizards, this line of six SpongeBob SquarePants toys based off popular internet memes is produced by the Alpha Group. Each one is 8" and has an MSRP of about $21, and all are available via Amazon right now. The figures in the Masterpiece Meme Collection are SpongeGar, Imaaaaaaagination SpongeBob, Surprised Patrick, Handsome Squidward (open eyes), Handsome Squidward (closed eyes), and Mocking SpongeBob (which is officially SOLD OUT!).

In Super7 news, we have two very exciting pieces of toy collecting goodness. First up, Super7 shows off pictures of their new Masters of the Universe Collector's Choice Snake Mountain Playset. While it was announced quite a while ago, this is the first time we've had a chance to see extensive pictures of the (massive) beautiful creation.

Snake Mountain has an MSRP of $600 preorders will open between May 1-31, 2019. There will be an option for six-month payment plans if you need it and can't afford it upfront. The highly detailed Snake Mountain playset features a demon with a moveable jaw, narrow bridge of red-hot lava falls, functioning trap door, real chains to shackle Skeletor's enemies, break-away wall secret entrance, Skeletor's table and bone throne, horrifying dungeon creatures, and more! 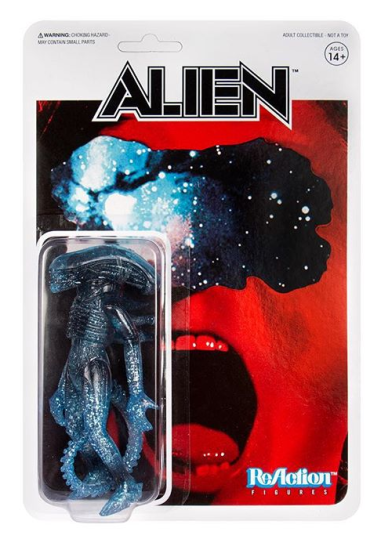 Next up from Super7, we have a special treat from their famed ReAction Figure line. Available for preorder on 4/29 (Alien Day) comes two new exclusive figures from the Alien franchise, a Xenomorph and Kane. In ReAction Figure tradition, they are about 4" tall and have an MSRP of about $15. But if that's not tasty enough for you, the best part here really is the retro throwback card art.

Moving from Super7 over to NECA Toys, we have two awesome pieces of toy news from another incredible toy maker. First up, NECA Toys shows off packaging and images for their new Golden Girls line of action figures. And no, that's not Golden Girl, like the 1980s She-Ra: Princess of Power clone line of fantasy action figure dolls.

We're talking The Golden Girls, the '80s show comprising of our four favorite Miami-dwelling ladies in their most golden of years. The set (each sold separately) includes Dorothy, Blanche, Rose, and Sophia all ready to tell you about St. Olaf, Sicily in the '20s and grub on some cheesecake. No MSRP or release date has been announced.

In other NECA news, fans of their Teenage Mutant Ninja Turtle toys have reason to celebrate. NECA Toys, together with TNMT owner Viacom, have struck a deal to bring NECA's Turtle Toys to fans overseas. Finally, fans of the movie turtles and cartoon turtles action figures (that have been so wildly popular in the US) have been confirmed available in Europe and Asia in a press release from NECA Toys this week.

Canadian fans are hopeful that this means the TMNT toys will be available in their region as well, but this has not yet been confirmed by NECA in writing. However, a global release of the toys will (positively) affect the amount of scalping that's been going on with these turtles, thus balancing the prices domestically as well.

In Superhero toy news (which again, remember, is still just cute talk for DC and Marvel toys) we have a lovely batch of new announcements. First up, Hasbro has revealed their newest in Marvel Legend action figures, this time from the Spider-Man franchise. The wave consists of seven figures total. We're getting movie versions of Spider-Man, Mysterio, and Spider-Man in stealth suit, as well as four comic figures: Hydro-Man, the six-armed Doppelganger, Julia Carpenter Spider-Woman, and the long-requested Scorpion. All of these had been previously revealed, but what we hadn't yet seen was the Build-a-Figure (Spoiler: it's Molten Man). You can preorder them today from Hasbro Pulse.

From Mezco Toyz's breathtaking One:12 Collective line, we have a stunning figure of Marvel's Moon Knight. With an MSRP of $80, this lovely is available for preorder directly from Mezco Toyz. Some of his extras include One:12 Collective body with over 32 points of articulation, two (2) head portraits, hand painted authentic detailing, approximately 17cm tall, and eight (8) interchangeable hands. His costume includes a fitted suit with 3D crest insignia, two (2) hoods (removable), wrist gauntlets, duty belt, and knee-high boots. 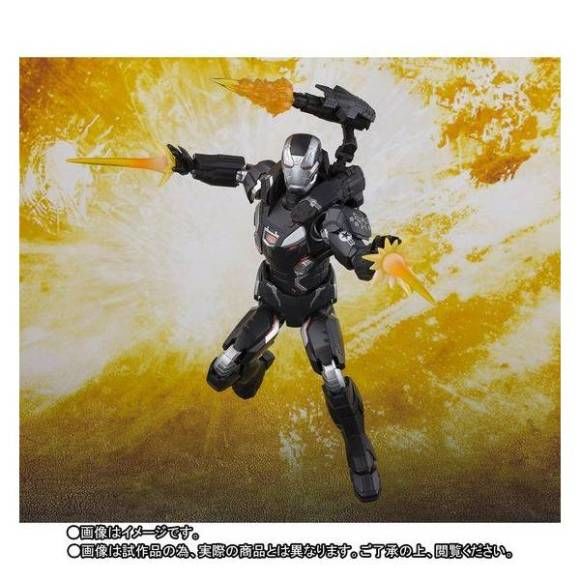 In Avengers toy news, Bandai announces another addition to their famed S.H. Figurarts line. This time, it's War Machine in his MK-4 suit as depicted in Avengers: Infinity Wars. This figure is a Tamashii web exclusive. It has an MSRP of $110 and stands 15 cm (about 6") tall. You can order yours right here, or on a host of online retailers. And of course, being that it is in the S.H. Figurarts line, the figure is highly articulated, wildly poseable, and comes with tons of alternate hands and attack effects. 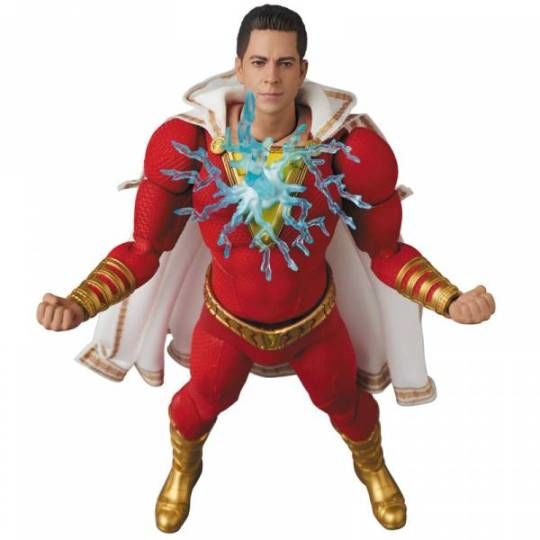 Moving on to DC toy news, a super detailed Shazam! figure is on its way from Japanese toymaker Medicom Toys. It is available for preorder now and has an MSRP of $64.80. It stands just about 5.7 inches tall.

Shazam comes with a whole bunch of accessories. He has a phone, a soda can, and the box he's carrying in the above picture. He has three heads, and two different laser blast attack effects. From what I can tell, there is articulation in his wrists, elbows, shoulders, neck, and a little bit in the knees and legs. The face sculpt and paintwork are super attractive to me, and I think this is a stunning figure for its price point.

And last up in superhero toy news, DC Collectibles has officially canceled their DC Lucha Explosiva toy line. First announced at New York Toy Fair in February 2019, these toys simply did not garner enough interest when they were solicited to retailers. The first wave of the line was set to include Luchador versions of Superman, Batman, Wonder Woman, Deathstroke, Metallo, and Cheetah. Perhaps they will one day make an appearance in one of toy author Blake Wright's future editions of The Toys That Time Forgot.

We're getting close to the end, my toy playing friends. So, let's wrap it up with a few more miscellaneous (though wildly important) toy pieces! Coming soon from Diamond Select Toys is a new line of Castlevania action figures based on the original Netflix anime. The first three of this series are Trevor Belmont, Sypha Belnades, and the prince Alucard. Each figure has approximately 16 to 20 points of articulation and comes with interchangeable weapons and accessories. You can preorder the figures on BigBadToyStore right now. 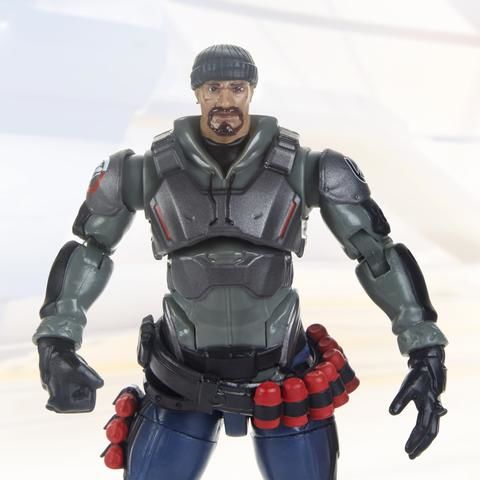 New on Hasbro Pulse comes four new Overwatch action figures available for purchase today — that's right, no preorder required! Each six-inch figure has an MSRP of $19.99, and the characters included in this new wave are Blackwatch Reyes (Reaper), Lucio, Sombra, and Tracer. Overwatch fans, are you totally stoked for these?

Last, but never least, is a treat for my G.I. Joe toy collecting family. While sometimes Joe collectors can feel neglected because of a lack of new product on the shelf, just know that you're not completely forgotten. Coming soon from PCS Collectibles is a beautiful Baroness statue that is guaranteed to woo you and break the bank at the same time. Preorders are opening today, April 25. It will have an MSRP of $550, measures 22 inches tall, and is ready to kick you in the money groin with her awesome, sexy boots. In addition to the standard version, there is an exclusive version where Baroness is giving us her trademark smirk. The smirk one is good. It's really, really good. And if I had any money left after this wild week in toy news…

My money would be on the smirk.