Welcome back to Important Toy News, the SYFY WIRE column that shows you a week's worth of amazing new action figures and collectibles, preorders you have to wait forever to get, and premium items so amazing, you might need to sell a body part to acquire.

Join me, your resident toy journalist, as I drag you back into the toy box with me, and once our Labyrinth-style journey is complete, we will have armloads of pretty, pretty plastic. Or in this case … silicone?

Check this one out.

All right, let's not beat around the bush — how long before someone takes this life-sized Alita bust and tries to do something weird with it? By weird I mean … well … maybe it's just too expensive to do anything weird with. But man, is it realistic-looking!

New from Queen Studios, the life-size Alita bust is a movie-accurate collectible based on her appearance in the 2019 film Alita: Battle Angel. The Queen Studios team worked hard to create a head sculpt with incredible likeness. Her eyes are custom-made, and her skin is made of silicone, making it quite soft. But for me, it's that hair I'm worried about. I've played with a lot of Barbies and dolls in my day. I'm not saying I'd go anywhere near Alita with a hairbrush, but seriously, that stuff just frizzes over time and looks terrifying.

Speaking of collectibles that are too expensive, want a Jurassic Park Jeep by Iron Studios that's way too expensive and … has LED headlights?

You know, Iron Studios is funny like that. For the most part, much of its inventory hovers around the $110 range for products, but every once in awhile, it just busts out the coinage demand. Do you guys remember last year when we covered the $1600 Back to the Future DeLorean and the $1000 Batmobile? Well, let's add this $779.99 1:10 scale Jurassic Park Jeep to the mix.

This Jeep doesn't really do anything but sit there. Of course, the paint job is great, but you know what I want? A crazy dinosaur running after it, lifting the Jeep with its teeth, and snarling. But if you want that awesome reality, it will cost you another $779. But for $1600, all of your Jurassic Park dreams can come true, short of having an actual Dino DNA amusement park. Which is probably for the best. 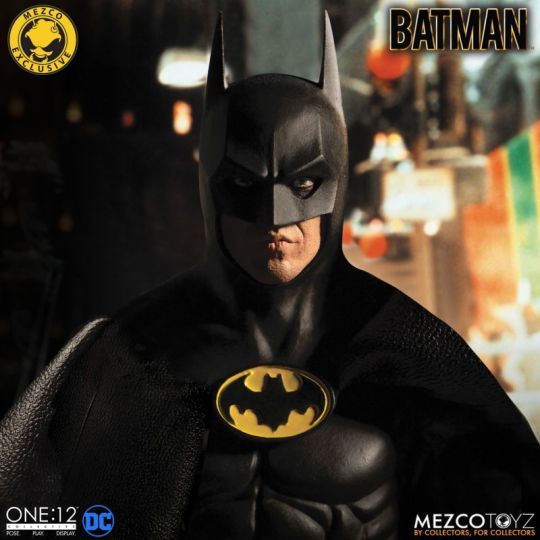 Speaking of Batmobiles and Caped Crusaders and all of that totally not-forced segue stuff, let's take a look at the newest One:12 Collective figure from Mezco Toyz.

You can preorder Batman – 1989 Edition for $110 from Mezco Toyz. It is described thusly:

"The One:12 Collective Batman – 1989 Edition features an all-new seamless body designed with an internal skeleton armature that is durable yet highly posable. Included are three cowled head portraits – one with movable eyes, achieving a new level of realism for the One:12 Collective."

This Bats is 6 inches tall and comes with so many accessories. From speargun to hook and wire, batarangs, time bombs, and more, you can never have too much Kea-bat-on in your life.

Where there's Batman, Harley Quinn is close to follow! Or it might be that whole impending release of Birds of Prey thing happening soon, but either way, she's here! Or, will be soon!

Anyway! Bandai has seemed to beat the rest of the toy giants to the punches (other than Funko, which announced its Birds of Prey Pop! toys last week, but the feelings on Pop! sort of… waver… throughout the toy community). As for Harley Quinn, she joins the S.H.Figuarts line dressed in some impressive golden overalls. Standing over 5.5 inches tall, Harley Quinn features an amazing range of motion and includes several accessories, including her derby skates. You can preorder her for $59.99 today. Harley Quinn will ship in April 2020.

We're nearing the end, my toy loving friends, but we can't wrap up this issue of Important Toy News without some…Turtle Power! Both NECA and Super7 are bringing some fresh Turtle Love, so let's check them both out and see what Teenage Mutant Ninja Turtles goodies can be ours to own.

First in line are the Turtles in Time figures from NECA. These toys are inspired by the pixilated look of the video game of the same name. The wave comes with four characters to choose from (Donatello, Leonardo, Slash, or a Foot Solider), are seven inches tall, and come with a few accessories. You can order the entire wave together right now for only $90 and they will ride through the sewer directly to your home in February 2020.

Cowabunga! The Super7 x Teenage Mutant Ninja Turtles alliance continues with the next wave of 3.75-inch ReAction Figures: Michelangelo! Donatello! Shredder! Foot Soldier! All come on retro-styled cardbacks with new artwork. The Turtles both come with their iconic weapons AND a slice of pizza and Shredder and Foot Soldier come armed as well. They join Bebop, Leonardo, Raphael, and Rocksteady in the TMNT ReAction Assortment!

Is Shredder always topless? I feel crazy right now. Have I just been looking right through his chest to the blades? Huh. Well, okay. You can preorder them by visiting Super7.com or wherever your favorite collectibles are sold.

How 'Knock at the Cabin's ending changed from the book