Welcome back to Important Toy News, the SYFY WIRE column that makes sure you know everything about the coolest findings in the toy world this week. Join me, the internet's favorite toy journalist, as I show you amazing toy after amazing toy at a rate so unbelievably fast, you don't know whether your spirit or your wallet will break first.

But all of this money-spending is making us hungry. And what do you do when you're hungry? That's right: you eat. You eat ramen, and just like Godzilla, you look so unbelievably adorable when you do it that it makes your face explode and you cry tears of unyielding madness.

Sideshow Collectibles makes dreams come true. Imagine you're a Kaiju sitting along the streets after a long hard day of destruction, slurping down a bowl of warm delicious ramen! And guys, look at the chopsticks! Reminisce on the destruction of cities and an ever-increasing kill count, replay the chorus of screams and cries as you garnish your noodles with the roofs of sky scrappers that once towered over the horizon. Take a sip of the delicious broth that warms your belly, for there is no better reward than a steaming hot bowl of ramen. Let out a hearty roar! Suggestion: How about another soup-focused figure called Brothra?

Shipping in late 2019 with an MSRP of $150, this huge 7.5-inch tall creation will smash its way into your heart! You can preorder it from Sideshow Collectibles today.

Coming soon are two great reveals: The Green Ranger/Putty two-pack that costs $40, and the Lightning Collection Wave 2 that consists of four separate action figures for $19.99 each. The wave consists of the Lost Galaxy Magna Defender, Mighty Morphin' Pink Ranger, Beast Morphers Gold Ranger, and Beast Morphers Red Ranger. They will all be released in Fall 2019, and you can preorder them today from Hasbro Pulse.

In this entry that I'm going to conveniently call "Retro Toy News," we have some really fun and interesting reveals.

Do you remember the '80s toy line Sectaurs? Well, my friends — those toys are coming back. Through a crowdfunding effort, Zica Toys (which has the action figure license for the somewhat obscure retro toy line) revealed new official artwork and teasers for its upcoming figures. Honestly, I actually have maybe one or two Sectaurs in my toy collection and this refreshed design is just so beautiful. Sectaurs were originally released by Coleco, but today, Zica Toys has the right to make action figures using the IP.

They are officially called Sectaurs: Warriors of Symbion and each of the familiar characters has an MSRP of $23. They are available for preorder now directly from Zica Toys.

Moving on from an IP that's not so memorable to one that's vintage and still insanely popular, Japanese toymaker Medicom Toy showed off its newest wave of Peanuts figures. For those unaware, the Peanuts franchise is explosively popular in Japan, and you can find all sorts of merchandise with the characters on it that you can't find in the states. However, over in Japan, Charlie Brown and the gang are referred to as "Snoopy and Friends," which one, isn't that much of a surprise, and, two, shows where the focus is.

My favorite of the newest wave, titled UDF Series 10, is definitely "Sack" Charlie Brown, from when he went to camp and wore a bag over his head the whole time.

He costs $13.99, will ship October 2019, and you can see the rest of the collection on BigBadToyStore and HobbyLink Japan. 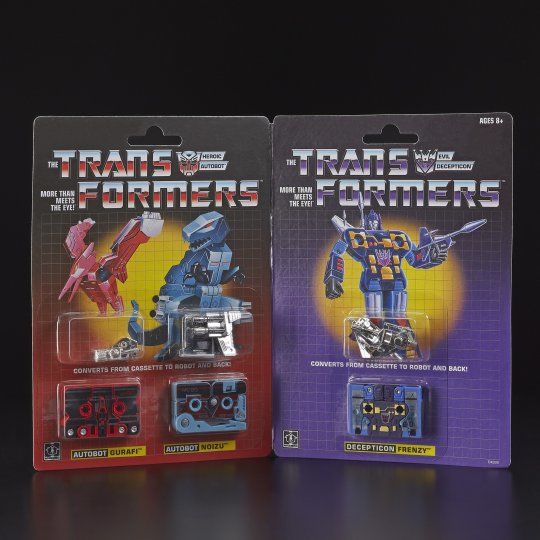 Keeping it in retro tradition, it sometimes feels like Hasbro shows off a new Transformers toy every 5 minutes. And while we can't talk about all of them here, we can definitely talk about this little G1-inspired number. These Transformers: Vintage G1 Mini-Cassette 3-Pack figures are designed like the original G1 versions — including figure styling, packaging, and art inspired by the G1 releases, plus classic tech specs and accessories.

(Re)start a vintage Transformers collection with these Noizu, Gurafi, and Decepticon Frenzy figures. They will ship in September 2019 and have an MSRP of $34.99. If you can't wait to see them in stores, you can preorder them now from Hasbro Pulse.

Ready for some superhero toys? Of course you are, and so is Mezco Toyz!

The One:12 Collective Spider-Man: Far From Home figure comes with four head portraits, including an unmasked head featuring the likeness of Tom Holland. The web-slinger is outfitted in a fully upgraded tech-suit with web pattern detailing and spider insignia. Spider-Man comes complete with Tony Stark's signature sunglasses, a web mask that fits over the heads of the other One:12 Collective figures, web base that he can stand on, two different style weblines that attach to his web-shooting hands, and a posable webline that he can hold.

He has an MSRP of $90, will ship in Spring 2020, and can be preordered from BigBadToyStore.

San Diego Comic-Con is done and gone, but that won't stop us from talking about an incredible announcement that came from the show.

And speaking of Marvel Legends figures from the Deadpool world, Hasbro announced the most bodacious team-up this side of Miami. Deadpool and Hit-Monkey make being an internationally feared assassin look easy.

This Marvel Legends two-pack has an MSRP of $39.99, will ship in December 2019, and can be preordered from Hasbro Pulse. The amazing storytelling and culture-shaping legacy of Marvel Comics now span 80 years inspired by both iconic Marvel comic books and blockbuster movies from the Marvel Cinematic Universe, these highly detailed 6-inch-scale Legends Series action figures are a perfect tribute to that legacy.

We're nearing the end, my toy loving friends, and we're going to wrap up this issue by giving some love to one of my personal favorite toymakers, NECA Toys. It announced a bunch of amazing stuff just one after another, so it wouldn't be proper Toy News unless we stopped for a moment to drool and admire.

Starting off with an amazingly creative addition to its TMNT toy line, NECA Toys has created 7-inch action figures based on the classic 1990s Turtles in Time video game. Series 1 includes Donatello, Leonardo, Slash, and a Foot Soldier. Donatello, Leonardo, and Foot Soldier come with signature weapons and a brand new hoverboard with a display stand that can be used for even more poses. The evil mutant turtle Slash comes with a sword accessory.

Shipping Date: November 2019 with an MSRP of $89.99. You can preorder them today from BigBadToyStore. 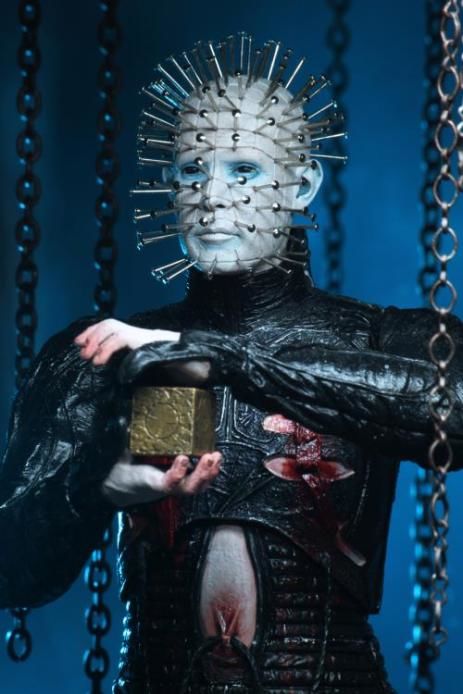 Horror movie fans, you're going to freak out for this! NECA Toys really made an awesome piece here. From the 1987 movie Hellraiser, Pinhead features an all-new sculpt and tons of nightmarish detail, from the pins in his head to the tools of torture dangling over the soft goods vinyl skirt. The figure comes with two interchangeable heads and both open and closed Lament Configuration puzzle boxes.

Pinhead has an MSRP of $26.99 and can be preordered today from BigBadToyStore. The anticipated arrival date is October 2019.

Keeping it in the horror family for October 2019 comes NECA Toys' Series 2 of its Toony Terrors line. I completely love these. Wave One included Freddy, Jason, and both iterations of Pennywise the Clown. And Series Two is proving to be just as much fun. Included in this series are Chucky and Tiffany (Child's Play 2-pack, $19.99), Leatherface (The Texas Chain Saw Massacre, $13.99), Michael Myers (Halloween, $13.99), and Pinhead (Hellraiser, $13.99).

So, between all the new Pinhead figures coming out, do you think we can count the twinkling of the metal nails in his face across all the toys like glitter stars in a distant galaxy? I sure hope so. See? Toys can be romantic, too.

What’s on SYFY this week? 'Chucky' Pride marathon, 'Despicable Me'