Welcome back to Important Toy News, the SYFY WIRE column that makes sure you know everything about the coolest findings in the toy world this week. Join me, the internet's favorite toy journalist, as I show you the most stellar, awesome, and breathtaking toys of the week at a rate so unbelievably fast, you don't know whether your spirit or your wallet will break first.

And the toymaker this week who will successfully steal all of your dollars in a row? Super7!

Seriously, how many amazing things can one company announce in one week? Well, three in this case, but we will start with the most anticipated and celebrated of the three franchises: ThunderCats. Old-school, perfectly sculpted, immaculately painted ThunderCats. Each figure has an MSRP of $45, will ship in spring 2020, and can be preordered today directly from Super7.

This wave of figures gives collectors the choice of Lion-O, Jackalman, Mumm-Ra, and Panthro. And by choice of, I mean ... you know ... all of them. Hopefully there's a wave 2 with our babe Cheetara in it! 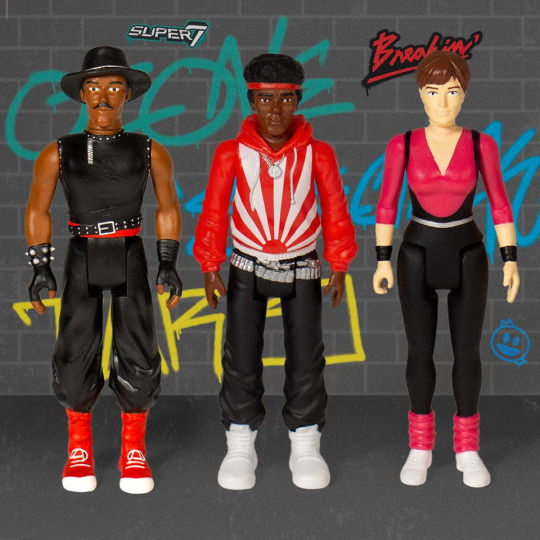 Next up in Super7 news, fans of '80s dance movies rejoice. Super7 is bringing us some 3.75-inch ReAction figures from the break-dancing film Breakin'. Everything was a competition in the '80s, and if you could ski, play basketball as a wolf, and arm wrestle with your backward hat on, you could damn well breakdance.

Each figure will retail for $14.99, and you get your choice of three characters: Ozone, Special K, or Turbo. They will be available for purchase on August 21.

And finally, to wrap up Super7's toy domination of the week, this piece might come as a little bit of a surprise to some collectors. However, music toys are nearly as popular as horror toys among manufacturers.

Super7 and the band Ghost's collaboration debuts with the Papa Emeritus III 3.75-inch ReAction Figure! Commune with him next week in the Super7 webstore, or you can preorder him now for $14.99 from BigBadToyStore.

Since Super7 did it in threes, why not give LEGO a go?

The brick giant revealed three new (and very different) play sets this week. We will start off with my favorite because I'm writing this column, and plus, I'm terrible at putting LEGO sets together. But this is one I can get my skill set behind.

Coming soon from LEGO is a 136-piece Brick Headz Ghost, just in time for the Halloween season. He's extremely affordable with an MSRP of $9.99 and lands in stores on September 1. Seriously, I am going to buy this so hard.

Next up from LEGO comes a Friends set in time for the show's 25-year anniversary. It has 1,070 pieces, costs $60, and will hit stores on September 1. This LEGO recreation of the café TV studio set is packed with authentic details, making it a must-have Friends memorabilia item for fans. The iconic seating area includes the couch, armchair, two chairs for the friends — all removable for easy play — and Phoebe's guitar playing stage.

Last in LEGO news comes a marvelous piece in collaboration with Disney. The last Disney sets blew me away, particularly the Steamboat Willie set we discussed back in March of this year. But now, my friends, we have a train. An incredible, breathtaking train. The kind I want to transport me into a steam-powered fantasy land. Did I mention this train is app-controlled? Because it is. It also comes with five minifigs (Mickey, Minnie, Chip, Dale, and Goofy), has an MSRP of $329.99, contains more than 2,900 pieces, and will be released September 1 ... you know ... alongside my $10 ghost set.

We're nearing the end, my toy-collecting friends. But before we wrap up, we will talk about two more pieces that I am going to generically call "Pop Culture Toys." Though normally this could go right into one of my favorite Important Toy News segments, "Giant Robot News." You may have noticed by now that segment names have a tendency to change at random for the sake of toy news convenience.

But, hey — look over there! It's an Iron Giant!

This beauty from toy brand 1000Toys is incredible. I love the Iron Giant, and there are far too few toys of him out there, considering his spectacular majesty. But really, the few that are out there are good. Coming in January 2020 with an MSRP of $109.99 is a 6.3-inch die-cast and PVC Iron Giant in Battle Mode. He is fully articulated, can hold poses, and is available for preorder today over at BigBadToyStore.

Remember when we reported on San Diego Comic-Con toys until your eyes were bleeding? Well, welcome to New York Comic Con! And today, toymaker Kidrobot kicks off the season by showing us three exclusive items for the show.

The lineup includes Sanrio Unicorn Hello Kitty 3" Figure for $20, The Simpsons Blinky the Fish Nigiri 3" Figure for $20, and Bob's Burgers Louise Dragon With the Girl Tattoo 3" Figure for $15. All very cute, all very nice, but my knee-jerk reaction is, damn — look at those low, low prices! It's almost like prices were raised and bloated just for San Diego Comic-Con. No! That would never happen in the world of toy exclusives at San Diego, right?