Vigilante hitman Martin Dobbs, aka Dead Eyes, retired because he fell in love. Now he’s back to save her and driving everyone — the cops, the mob, and even his wife — crazy.

If the story rings some bells in your indie comic-loving brain, it’s because you may have actually read it. It came out last year, under the title Dead Rabbit, but Image Comics was forced to pull the series after just two issues due to some unintended trademark infringement. (Turned out there is a New York City bar named The Dead Rabbit Grocery and Grog that had trademark ownership of the title.) The entire ordeal settled out of court, and now writer Gerry Duggan (Deadpool, Analog) and artist John McCrea (Hitman, The Boys) are back with the newly renamed Dead Eyes, a retitled, repackaged version of the same story.

With a few extras.

As frustrating as it has been to see it halted for so long, Duggan is excited about this series, and he's anxious for the world to learn Dobbs' story (again) and to show the attention to detail that McCrea bestows on every issue. Duggan was kind enough to share with SYFY WIRE an exclusive Phil Noto variant of an upcoming cover (see below), and to talk about his work and how watching Letterman inspired his comic timing.

All of your work — from Deadpool to Attack of the Show to Dead Eyes — have a honed level of comedic timing. What comedians influenced you?

Gerry Duggan: No one's ever asked me that. The immediate answer that leaps to mind is David Letterman. I stayed up too late as a kid, reading comic books and waiting for Late Night With David Letterman to come on. They were doing weirder, cooler stuff on late night. It obviously [became] more mainstream when he moved to the 11:30 timeslot. That's the first time I remember seeing a bunch of comedians — Charles Grodin, George Carlin ... and Letterman, he had that Midwestern politeness, but then also had that cutting humor, and I love that.

Is that why the first time we see Martin Dobbs in Dead Eyes, he’s naked and yelling about his hemorrhoids?

I love all of [my] characters, but it's my job to torture them, and sometimes I do feel bad.

How easy is it to bring Dobbs out of retirement?

His wife has an illness and the bills are piling up. The truth is, when you can walk away from the game, your skills atrophy. [In] our second issue you will see that unretiring is going to be a lot more complicated than he thought. He gets back with his wheelman, who we only know as "Wheels." Wheels and his husband, Jake, have been living a quiet life in the Boston suburbs, but are also financially strapped with elder issues and medical debt. So everyone is excited to see what they can make happen, and it's a wonderful disaster.

Now that he has resurfaced, are the victims of his last score coming for him?

They believe that he has stolen a lot of money that, unfortunately — or fortunately for him — he does not have. That will be something that comes up in that first arc. Then we're going to see how he deals with the mob looking for him, the cops looking for him, and whether or not he's going to be able to steal any money to help his home situation.

How did the outcome of Dead Rabbit affect the Dead Eyes storyline?

Dead Eyes 1 and 2 are previously published material that has been tweaked [from Dead Rabbit], and then new content, brand-new material, begins in Dead Eyes #3.

The noir artwork is stunning. Is this the first time you’ve worked with John McCrary?

That's right. John McCrary is working with Mike Spicer on colors, and he’s this wonderful pro who’s worked with Garth Ennis, Mark Millar ... he's worked with everybody. John slowed down and fell in love with these pages. I know I'm biased, but I do think this is John's best work. And I know John feels like that too. I'm just so glad to have eyes back in the world for that reason alone.

You’ve mentioned that real-life events inspired some of your work in the past. Is that true in this case as well?

Yes. Some of the Dead Eyes experience actually comes from my time living in Boston. It was the place I learned to write, tend bar, and, unfortunately, learned to fight. I wasn't a stickup guy, but the gag in Issue 2 with the bottle underneath the brake pad is something that happened to me. I almost died in Boston when I was in a cab where the driver’s vodka bottle came between the brake pad and the floor of the car. We almost, uh, crashed.

There's also a real, true-life Boston crime that we're going to nudge up against at the end of our first arc. That will lead us into a second arc. It [coincides with] one of the most notorious art thefts in the world, which occurred in Boston. 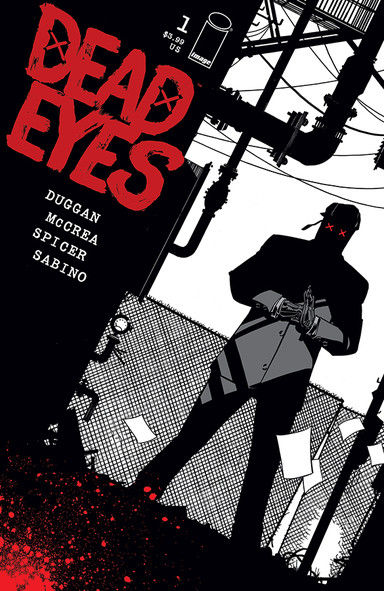 A single choice forever changes both your characters, Martin Dobbs and Jack McGinnis. Was there a choice you made in your life that forever changed you?

I had helped my mom move houses after college, and then I was saving up money “in theory” to move to New York, and everything was just so expensive. My buddy Chris, who I'd roomed with in Boston, called out of the blue one day. He had moved out to L.A. and was working as a medical propmaster on ER. It turned out he needed a roommate. Back then, it was much easier to be poor in Los Angeles than it was to try and be anything in New York. So I came out here with like, I think I had $300. I had sent him a rent check and I had a bag of clothes.

I went up and down Melrose Avenue here in town, and I put in applications everywhere I could. There was no help wanted sign in the window at Golden Apple, but I went in because I love comic shops and fell in love with that place and just told the owner, “Hey, if you ever need anyone, may I leave you my number?” And [he told] me, “You know what? I'll try you for two weeks." So he really changed my life. I mean, I didn't just get a job, I got a community. These are the guys that would introduce me to my wife later and lead to so much more.

If you could talk to young Gerry helping his mom move right now, what would you tell him?

I'd say, "Don't wait. Make the jump earlier." That's the same thing I'd say to anyone that wants to be an artist in any way. Be bold. Take really big swings. Because when you bet on yourself like that, there's no downside.