This month Indie Comic Spotlight is dedicated to African-American creators and publishers in the indie comic book space in honor of Black History Month.

Anansi the Spider God of Stories is a West African trickster deity known for spinning tales and tricking others (god or human) out of things he desires. Many have told Anansi stories before — and let's not forget Orlando Jones' memorable take on "Mr. Nancy" in American Gods — but comics scribe Greg Anderson Elysée wants to weave an even bigger web. He's using the Anansi myth to create stories for a new generation while weaving in tales and characters passed down for generations from all over the African diaspora.

Born in Brooklyn to Haitian parents, Elysée loves superheroes like most kids his age, especially Batman, Black Panther, and Static. But as a teen, he was drawn to characters that had stories that centered around mythology and horror, like John Constantine, Spawn, and Brother Voodoo. And, as an adult, he combined those two influences with a heavy dose of African mythology and folklore.

Elysée's comics center on a character named Is'nana (an anagram of "Anansi"), who has so far been the subject of two collected volumes, with a third on the way. The first volume, the award-winning Is'nana the Were-Spider: Forgotten Stories, chronicles the origin story of the reluctant superhero who happens to shape-shift into a venomous spider. Is'nana's father, Anansi, gave him the ability, and together they set out to rid our world of gods and monsters who have escaped from theirs.

SYFY WIRE spoke with Elysée about why these stories are so important to him and why he loves the horror comic genre so much. 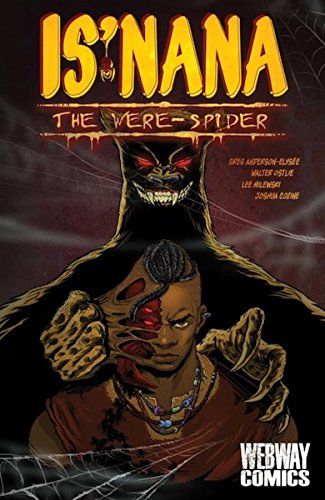 How do you feel about the portrayal of African mystical arts as they're presented in comics today?

I have a love-hate relationship with a lot of them, but that also stems from my annoyance from how mainstream media in general likes to depict African spirituality and beliefs. We still have Vodou being used as a source of horror, something to be scared about, even though it's just African beliefs and worship of ancestors. But I do feel that a lot of comic books, in general, have been using Africana aesthetics, beliefs, and imagery for some positive portrayals and some really cool ideas. Or it could be I've been fortunate to find some really well-made ones. There are a lot of books I would love to write from other companies, like Brother Voodoo (Marvel) and Shadowman (Valiant).

You mentioned Brother Voodoo. Wasn't he a rather stereotypical portrayal of a Vodou priest?

I originally thought he was a complete joke. I was a little offended that the one sole Haitian character [in comics at the time] was this weird-looking dude who dressed funny was also a Vodou priest. But when I started doing some research and I read his appearance in Christopher Priest's run on Black Panther, I realized there was probably more to this character. I eventually found some of his other stories and enjoyed how he was a Vodou priest who used his powers and position for good, something at the time I wasn't used to seeing.

His first few stories were actually really fun and beautiful, and you can tell research was done to develop the character and his brother, Daniel, but it seems a lot of it gets lost with later writers here and there. I'd love to tackle the character and really incorporate some research into his lore and really dwell into his powers and connections to the Loa.

How many volumes of your comic are available right now?

Currently I have two volumes of Is'nana the Were-Spider. The first one, Forgotten Stories, is the introduction of Is'nana and Anansi, where they face off against Osebo the Leopard after Is'nana mistakenly brings forth these horrific creatures into our world. He then takes the responsibility to stop them.

The second volume, The Hornet's Web, has Is'nana and Anansi meeting a family and facing off against an army of were-hornets, were-wasps, and were-bees. He also has a side quest connected to Papa Legba, the Loa God of the Crossroads.

How did you find your artists?

The main artist who's been there since day one is Walter Ostlie. I found him on a comic forum after I posted an ad searching for an artist. He also introduced me to my regular colorist Lee Milewski, who would then get Kat Aldrich on board with colors for Volume 2. Joshua Cozine has done amazing work on letters and production for Volumes 1 and 2. Daryl Toh came on board for Volume 2 when Walter was unable to due to scheduling conflicts with his other projects, but he was able to do the second story in the volume. Daryl originally surprised me with an awesome pin-up, and I was a fan of one of his web comics, Tobias and Guy, and that started our friendship.

David Brame is the most recent addition to the crew. He drew the Rawhead and Bloody Bones story in the recent release, Is'nana the Were-Spider: The Ballads of Rawhead & John Henry. David did an awesome print for the The Gentleman, and we began to bond and work on other projects together. Deron Bennett also joined, lettering the Rawhead story.

Would you classify Is'nana as a horror comic?

It's definitely a horror book. I'm a huge horror geek, and it's my favorite genre. A lot of my works have elements of horror even when it's not intentional. Horror is essentially about the eruption of the repressed. Something is downplayed, suppressed, and oppressed so much that when it finally erupts, it causes chaos around them, inflicting harm to itself or others around them. Many characters in Is'nana have their own motives. Osebo the Leopard feels suppressed in terms that he feels like he's being forgotten and he doesn't want to fade away. He possesses people and does unspeakable acts to draw attention. Kantite and Mmboro have been oppressed in their world, and now that they get some new abilities, they seek to take over and horrify anyone who stands in their way. There's a lot of lovely body horror and imagery in it.

Anansi is a trickster, so he's continually tricking his enemies and then making them lifelong enemies. Osebo the Leopard, Mboro the Hornet, and Onini the Python are the three main ones who were tricked and defeated by Anansi in order for him to become the God of Stories. They also become Is'nana's enemies by association to Anansi, who instigates a lot of it. That drives Is'nana crazy, who would actually prefer to be a pacifist.

Are there other African gods that you are going to write stories about?

Most definitely. In Volume 1 we see Papa Legba from Haiti, Papa Bois from Trinidad, Brer Rabbit, a Kishi Demon, La Diablese, and other spiritual figures. In Volume 2 we meet Ti-Malice, Bouki, Compere Chat, who are Haitian folklore characters. The recent Is'nana story, which is a single-issue one-shot (not yet collected), has Is'nana meeting Rawhead and Bloody Bones from Gullah Geechee culture of the South, and John Henry. There will definitely be a lot more coming out soon from other African diasporas. The aim for me is to continue my research and use that research as inspiration for new stories to introduce to my readers and audience. Western education won't teach these stories, so I'm trying to do my part to help change that.