In 1971, Dennis O'Neil and Neal Adams introduced John Stewart as a new member of the Green Lantern Corps, making him DC Comics' first African-American superhero. Since that historic occasion, we've had to wait almost 50 years for another black character to wield the Power Ring, a wait that ends this month as Sojourner "Jo" Mullein debuts in her own series, Far Sector*, out via DC's Young Animal Imprint.

Mullein is as legendary as her creator, fiction author N.K. Jemisin. Having won both a Nebula Award and a hat trick of Hugo Awards for her Broken Earth series, Jemisin is a giant in fantasy fiction. It was not long after her first win that Gerard Way approached her about writing a different kind of Green Lantern series. It would feature a young African-American who's new to the Green Lanterns, who wasn't part of the Corp per se and could exist off on her own in her own storyline. From there, the groundbreaking Far Sector was created and Jo Mullein was born. 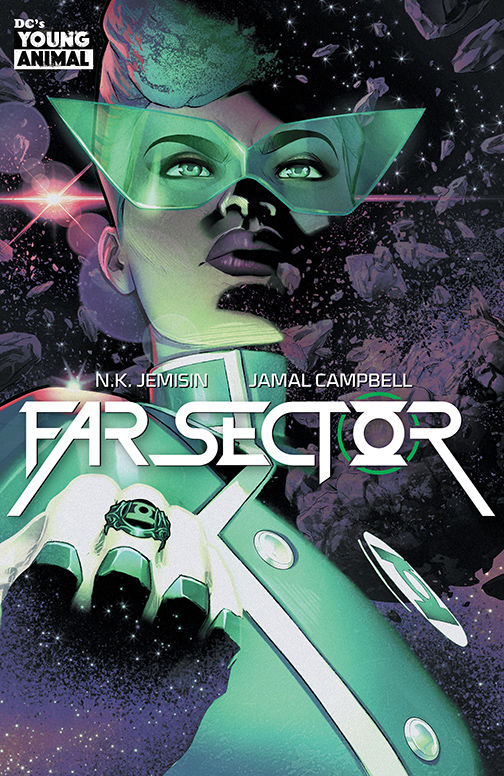 At NYCC 2019, Jemisin discussed how Jo is from a parallel universe, a former NYPD cop who resigned from the force at the height of the Black Lives Matter movement. When the story begins, she is now permanently stationed as a lone Green Lantern in a universe on the other side of the galaxy, on a planet called the City Enduring. The "city" is part of a vast Dyson Sphere of connected platforms inhabited by three alien races.

Well, actually, Jo is the alien. Not just because she's human, but because the people of Enduring are devoid of feeling emotion. That's due to a government-mandated "Emotion Exploit" that has eradicated almost all crime and forms of violence. That is, until a murder occurs and Jo is tasked with finding the assailant.

Not only are comics a new medium for Jemisin, but so is a collaboration — not that you'd know it from Jamal Campbell's (Naomi, Green Arrow) stunning artwork. Together they are crafting a beautiful and very different type of Green Lantern story.

SYFY WIRE spoke with the team to find out what it was like worldbuilding a new character and whose idea it was to design Jo after Janelle Monáe.

What are some of the comics and shows and just geekdom that you were into growing up?

Campbell: Growing up, I guess my main thing was the superhero cartoons of the '90s, so like Batman: The Animated Series, Spider-Man, stuff like that. Also, anime, like Dragon Ball and Sailor Moon and sort of like that era of the '90s, early 2000s anime was what most influenced me growing up.

Jemisin: I was a big fan of Star Trek: The Original Series and the original Twilight Zone. I was a fan of some of the X-Men comics, but at a certain point I hit a paywall as a college student. It cost too much, so I started getting more into indie comics, because then you didn't have to buy like six of them to know what the story was.

But I was a giant anime fan and I got a lot into manga. Like a lot of shojo stuff, and video games are probably my most recent and biggest influence outside of science fiction books.

Because you come from the world of long-form prose storytelling, was the adjustment to comics difficult?

Jemisin: It's a very different structure. Short stories are always harder for me than the novels. And this is a relatively short story told over 12 issues. So yeah, that's a major adjustment. This is the first time I've ever done a collaborative work as well. Learning different mediums, learning different methods of storytelling helps all of my creativity as a whole.

We know Gerard Way brought Nora onto the project, but Jamal, how did you get involved with Far Sector?

Campbell: Really it was our editor, Andy Corey. I worked with him on Vixen and on Green Arrow.

He's always been rooting for me over at DC. He came to me with Nora's scripts and outlines. He said, "This is ... basically Janelle Monáe in space as the Green Lantern." I said yes before I read it, and then I read it and [it was an even bigger yes].

Jemisin: If you manage to get them, let me know.

Jo exists in the same universe as us, so how did you bring the future and our reality together in the story?

Jemisin: Well, the future part of it is that she's in a culture that is thousands of years ahead of our own, in terms of its technology and even its social issues. They've been through the stuff that we are going through right now. And they have not come out of it smelling like a rose. They basically [removed emotions completely from their society] in the end.

But Jo is still from Earth in 2019, and she's bringing that current sensibility into this future place. To a degree, the people in the city "Enduring" kind of regard her as a quaint, retro [character]. That's the thing that she's having to wrestle with. So it's not our future. It's the future of another world, but it's a future that could become ours if we're not careful.

She's investigating a murder in this far-off universe that appears to be emotionally driven, which is why they need her help. But they're not qualified to handle a murder investigation either, right?

Jemisin: Yeah. I mean, they have to look up the records of how to figure out how to do crime scene analysis from ancient records. That's precisely why they wanted Jo to come on board. They're concerned that there might be things that they've missed or things that they don't understand.

A large part of it is because this is pathological emotion. They've got a drug epidemic going on, and the drug shuts off the thing that keeps them from feeling emotion. So they're not just even having normal emotions, they're just suddenly exploding with them.

Jamal, there are three races of citizens in Enduring. Can you tell us about how you created them?

Campbell: Initially, I got Nora's descriptions of them all, but Sean Martinbrough did initial designs for the Nah, which is the race with the wings and tails. They're most humanlike, but they have seven digits on their fingers. They have a tail with wings or fins.

The keh-Topli are the plant-like figures. They have a bulbous body naturally, and then they can sort of like shapeshift their bodies to appear more humanoid, or less threatening, because technically they're predators. So I naturally made them look very creepy, very unnerving. They're the ones who obscure their faces, so they're harder to read.

The @At [pronounced "At-At"] are a digital, AI race. So in terms of their features, they are very mannequin-like. They are very similar in terms of like their body shapes, but they're also the most expressive, because they can change their skin tone to be literally any color, because it's all made of hard light constructs.

Nora, what was your response the first time you saw Jamal's images of the characters?

Jemisin: Mostly just a giant, loud girly "squee!" That was about it. I think I actually "squeed" in the email too, if I remember. Because it's so fun! I had finished the scripts by the time that Jamal came on board. And I was so focused on the writing and formatting and the concepts, but it felt like a real thing when I saw the images that he was putting together. I was super excited!

For each of you, what was your favorite scene to create?

Campbell: My favorite scene to draw so far is at the end of Issue 1. There's this moment after Jo sees the council and sort of walks out onto a platform on her own and it's the first moment she has just by herself to just breathe and think. In the same moment, the artifice of the digital image in the sky, [it's like a giant projector] shuts down for a second and she can actually see [the vastness of space for a moment]. And she takes down the visor and just sort of like cups this sun in her hand and thinks about when she first got the ring.

Jemisin: My favorite scene so far is in Issue #2, if I recall ... but I can't talk about it because of spoilers.

Are we going to see other parts of the Lantern spectrum in the future?

Jemisin: For me, that depends on how this goes. This is, this is me dipping a toe [into the medium], seeing if I like the water, it's too soon to tell yet. I mean, I would love to work with Jamal again. At this point, I'm also trying to figure out how to balance this, plus the fact that I have another book due and so on. So I've got a couple of careers right now.

So much of the Broken Earth series was about women with powers that are linked to emotions. Do you find parallels between your fantasy work and the Green Lantern 'verse?

Jemisin: Well, let me just point out that Green Lanterns specifically are tied to willpower, not necessarily emotions and overcoming fear. But yes, that's certainly something I want to explore [more here]. Particularly with a character who is a Black woman and has fears that may not be the same as, say, the Hal Jordans or the Guy Gardeners of the world. But you'll have to tune in for the next 11 issues to find out.