For March, in honor of Women's History Month, Indie Comics Spotlight is dedicated to women creators in indie comics.

Taneka Stotts loves comics. She eats, sleeps, and breathes them. She also believes that sequential art is an amazing vehicle to find and showcase new talent. It's one of the many reasons why she went from writer to co-publisher at Beyond Press, where she also wears editor and writer hats alongside Sfé R. Monster and Shing Yin Khor.

Stotts is fiercely dedicated to publishing the work of talented marginalized voices, specifically women of color and the LGBTQIA community. Anthologies are her vehicle of choice, fueled by Kickstarter, and she looks to tap into creatives that mainstream comics can't seem to keep employed. (A tactic colleague Spike Trotman has also used for her Chicago-based company Iron Circus.) Stotts often fights the uphill battle of getting new work seen, keeping creatives paid, meeting deadlines, and deftly dealing with pushback from a changing comics community that hasn't always been welcoming to diversity.

Her hard work and dedication paid off in 2018 when ELEMENTS: Fire, a comics anthology by creators of color and edited by Stotts, won an Eisner Award for Best Anthology. It's an honor she shared with the anthology's featured contributors, including Steenz, Nilah Magruder, Der-shing Helmer, and Myisha Haynes.

Stotts took a break from promoting her new magazine Casual Hex (which launches today) and her next anthology ELEMENTS: Earth to talk to SYFY WIRE about her success and what keeps her going.

What was your favorite comic, hero, or story growing up?

This is always a difficult question to answer. I loved so much growing up.

My favorite comic while growing up was actually the manga Magic Knight Rayearth. I discovered that series in the late '90s and have been a CLAMP fan for life. I enjoyed ancient mythology, so my heroes wore different capes and slayed gods. So I'll stick with MKR! It's a classic for me.

Who or what inspires you?

How did you get started in comics?

Actually, I wrote a few webcomics first. I worked on one called Gran Grimoire with my wife that we eventually stopped when she got full-time work in the comics industry. I also had written two web series before that, but they, unfortunately, were never completed because the web service hosting them shuttered.

Editing came after with my first anthology, Beyond, where I was initially selected to contribute as a writer. Editing sort of fell into my lap by way of life events, and it stuck with me because I wanted to see amazing stories being told.

You were a writer on the Beyond anthology before you became the publisher. How did you make the switch?

The switch wasn't hard to me, though it looks really strange. While I had previous experience fielding larger projects with my day job at the time, I really just took the initiative and put together the backbone of what grew to be our process.

Thinking about it now, it feels like I just dove in and didn't look back.

You have this amazing ability to bring the right people together to create your comics. What's your secret?

Reading social media accounts to determine what kind of a person someone is and also befriending people outside of comics that I would like to work with.

Having a real connection. That's it, that's the secret.

Publishing and editing anthologies is an incredible skill, and you find some amazing creators, but will you be creating more of your own work soon?

I do create my own work. I'm doing it more now than before. Anthology work is hard because you're trying to juggle the emotions and schedules of dozens of other people. You want to create a platform for others to tell their stories, but the question is, can you balance that and not lose your own voice at the same time?

I feel that as marginalized creators, we're already at a disadvantage. Being ignorant of that fact or stepping over others is not how I live my life. So I try to do what I can. However, my first Eisner nomination was for my webcomic Déjà Brew that I wrote and created about a magical boy named Tobias.

Now that a new generation of anthology creators are coming up, perhaps I should just hang up my hat and focus on myself.

What inspired you to create ELEMENTS: Fire and now Earth? How many volumes will be in the series?

I have always wanted to make a space for creators of color. Working and living in comics, I found the spaces I existed within were mostly whitewashed and thus did not feel welcoming to those curious or looking to explore comics. Also, I felt our stories were being told by people who never lived a day in our shoes. Ultimately, I wondered if folks actually cared about marginalized people or just our LGBTQ+ identities. It was an interesting time because I thought ELEMENTS: Fire would fail because I refused to remove A Comic Anthology by Creators of Color! from the title. However, I was proven wrong, and I'm truly grateful for that experience.

ELEMENTS: Earth is our second installment. I imagine I'll do one more after this, but who knows what the future holds? I just wait for the right timing and hopefully, there will be a day when ELEMENTS is unnecessary because inequality within this industry is fully exposed and creators find a place for their voice within the mainstream.

You are are a consistent voice in the Black queer femme comics community. What keeps you motivated?

A better tomorrow. Not the movie (though it's great), but literally watching those who I have mentored or fostered finally grow into prominent individuals within this industry. Together we remove old guards, change the landscape from the inside, and watch outside voices who declare they support our diversity be exposed and moved on from.

I make zines of projects I would love to work on but don't have the time to these days. This is the second zine I've made with artist Ria Martinez. While Casual Hex is an actual comic, we've decided to release the Bad Mojo zine first. I feel this way, you can meet the characters, find out a bit about the world, and I can test out some of this world-building I've been doing for a year or so. 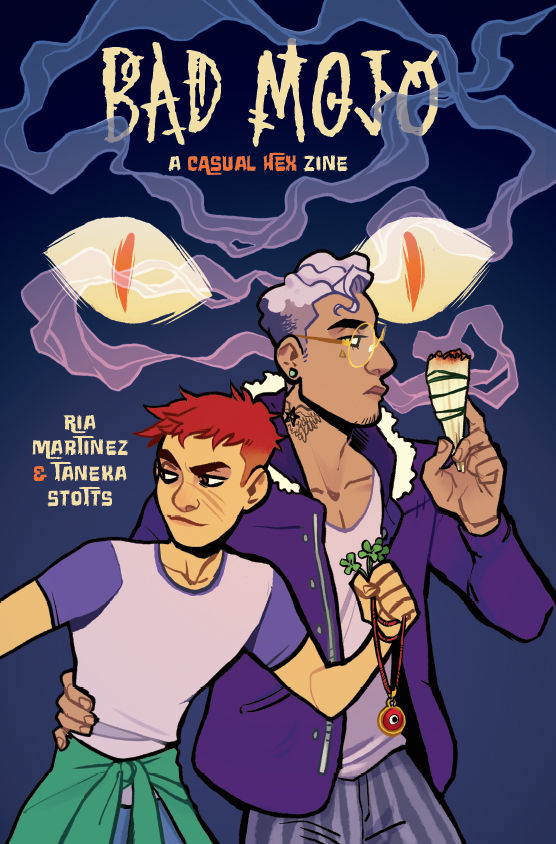 What's next for Casual Hex?

Well, we're launching the comic on the Ides of March, or March 15. I felt that day is particularly a bad luck day and is perfect for the theme of this comic. We'll be live on CasualHexComic.com and also posting it on Webtoon. Eventually, we'll take it to Kickstarter as a complete book, as we're far ahead of what is being released and the web presentation will be a good taste of what's to come.