Iron Man 2 turns 10 on May 7, and while it doesn't get as much attention as other installments in the Marvel Cinematic Universe (including the two other Iron Man-centric films), there are many things worth celebrating about the movie. It's in Iron Man 2 where we see Tony Stark and Pepper Potts kiss for the first time, for example, and it's also where we get our first glimpse of John Slattery playing Howard Stark and Don Cheadle playing Rhodey. This is also the first look we get at Scarlett Johansson's Natasha Romanoff.

Read on to learn why Justin Hammer — that ne'er-do-well arms dealer who thinks partnering with a murderous, technological genius is a good idea — is reason enough to give Iron Man 2 a re-watch.

The best part of Justin Hammer is that he's played by Sam Rockwell. According to Iron Man and Iron Man 2 director Jon Favreau, Rockwell was on the shortlist of actors initially considered to play Tony Stark. While he obviously lost the part to Robert Downey Jr., Rockwell still got his chance to play in the MCU by taking on the role of Hammer, a character Favreau created with Rockwell in mind.

While Rockwell brings some of that arrogant a-hole Stark energy to Hammer, he elevates the character from being a one-dimensional vainglorious arms dealer into a quirky-yet-charismatic corporate rival of Tony's that desperately wishes he was as cool as Stark.

It's the little ways Rockwell shows Hammer trying to do this that make Hammer such a delightful villain: his orange-stained fingers from a botched fake tanning job; his unforgettable dance moves when presenting his killer robots at the Stark Expo; and, last but not least, the way he jovially sucks on a lollipop while showcasing a slew of firearms to Rhodey (Don Cheadle), eagerly trying to find the assault weapon that Stark's best friend would consider "disco enough."

In the official commentary for Iron Man 2, Favreau describes Justin Hammer as the Daffy Duck to Stark's Bugs Bunny. Rockwell's portrayal of Hammer definitely fulfills that role, but the actor does more than just make Hammer a source of comic relief — the second-rate Stark is menacing as well. Rockwell's performance, from his pained facial expressions to the way he wheedles at Tony, reveals the character's dark core — Hammer would do anything to be just like Tony.

02. Hammer might be the Daffy Duck of the MCU, but he's still shockingly capable

Justin Hammer may never be as smart or cool or charismatic as Tony Stark, but he's still more capable than he ever gets credit for. When faced with robot suits that keep malfunctioning, he thinks outside the box and decides that Ivan Vanko (aka Whiplash, played by Mickey Rourke), a recently incarcerated terrorist who understands the tech of Stark's Iron Man suits, is the solution to all his problems.

Granted, partnering with Vanko probably wasn't Justin’s best move — but the CEO of Hammer Industries did have the wherewithal to break Vanko out of prison and convince the world that the Russian was killed while trying to escape. (You try doing that! It's not easy!)

And yes, even though he's glaringly incompetent when compared to Tony, what he lacks in technological genius and egotistical flair, he almost makes up for with merciless ambition. 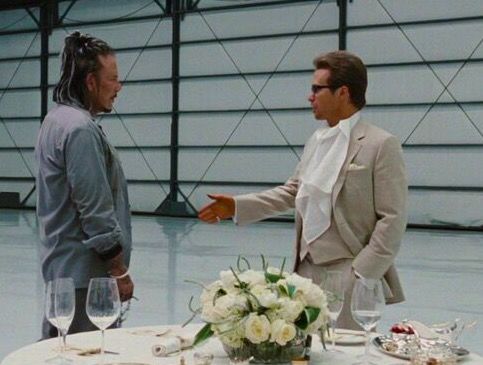 03. He outshines Whiplash, the ostensible villain of Iron Man 2

Last but not least, he's more memorable than Vanko/Whiplash, clear-cut villain of the film.

Now don’t get me wrong: Whiplash isn’t a bad villain; he’s merely the more predictable one. And yes, Vanko's clear genius and the fact he has a cool suit replete with whip-like tendrils that can cut a car in half make him quite impressive. But Whiplash doesn't have the dance moves or aura that oozes with douchey desperation that Hammer has.

And so while Justin is definitely a second-rate Tony, he's a first-rate villain who makes the MCU a richer place.

04. The Hammer has more to give the MCU

Things don't turn out well for Justin by the end of Iron Man 2 — he's betrayed by Vanko and subsequently arrested for his part in not only springing the terrorist out of prison, but also for his implicit (albeit unknowing) involvement with Hammer Industries' killer robots going on a shooting spree at the Stark Expo.

And so for the past several MCU films, Hammer has been incarcerated at Seagate Prison.

We get a glimpse of his life there, in fact, in a mid-credit scene of the Marvel One-Shot, All Hail the King. The approximately 10-minute short focuses on Trevor Slattery (played by Ben Kingsley), who pretended to be the infamous terrorist the Mandarin in Iron Man Three, and his life in Seagate. Hammer is clearly unimpressed by Slattery and clearly still obsessed with Tony and, by extension, extremely jealous of Pepper Potts (in more ways than one).

The end of the short (Warning: Spoilers!) has the organization the Ten Rings kidnapping Slattery from jail. And with the strong likelihood that the next phase of the MCU will reveal to us the real Mandarin (in the upcoming Shang-Chi and the Legend of the Ten Rings), who's to say that Justin Hammer doesn't also escape Seagate when Slattery gets taken?

It's certainly possible, which means we'll maybe (hopefully!) get more Hammer time in the future. Until then, however, we have his performance in Iron Man 2 to keep us entertained.