Wait. Who really is the good guy in The Lion King?

Fan theories can really mess with your head (and your other fandoms), if you ask SYFY WIRE's Jackie Jennings (in full Rafiki cosplay!), Dany Roth, and Moujan Zolfaghari — and possibly the stuffed incarnations of Simba, Mufasa, Scar, and Rafiki silently staring through your soul.

The live-action movie, starring Donald Glover, Beyoncé Knowles-Carter, Seth Rogen, and James Earl Jones, is 3D-ifying Disney's smash from the summer of 1994. It's also raised a herd of questions that were possibly dug up from that elephant graveyard Simba was forbidden to enter.

So about Mufasa, apparently there have been whispers going around the internet that the former lion king orchestrated that whole circle of life thing to purposely marginalize the hyenas. There must be something about hyenas that the Simba's dad thought was detrimental to his animal society, but it's hard to figure out exactly what. They do have a creepy laugh.

That can't possibly be enough to exile an entire species. Maybe sort of legit?

Speaking of hyenas and the one lion who associates with them, let’s talk get into the Thor-and-Loki-esque theory that Scar is actually Mufasa's adopted brother. This one seems pretty legit. If you really look at Scar and Mufasa, you have to admit shared DNA isn't the first thing that comes to mind. But (there is always a "but" with these things) ... who are the parents? Do these lions need a paternity test? Don't forget that recessive genes are a thing.

But what if Loki and Thor themselves are related to these creatures somehow, because the whole thing is secretly a part of the MCU and the animals can talk because of vibranium exposure? Talking, singing lions and monkeys and meerkats are supernatural in a way, but whether that makes them actual superheroes is questionable.

Watch on to hear more theories that may or may not be legit, and to see the awesome Lion King-MCU mashup poster! 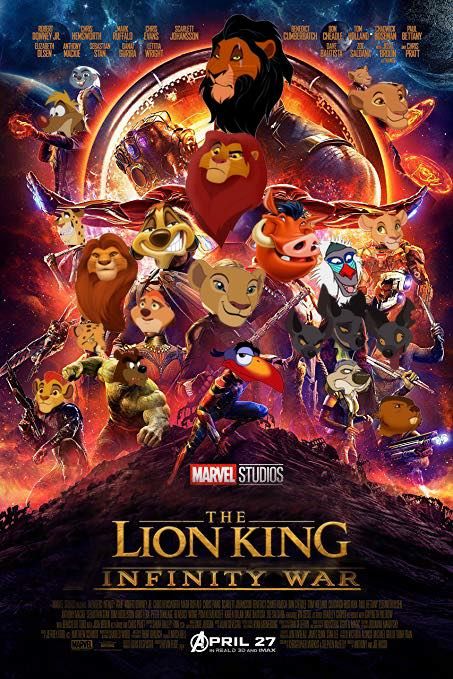 This article was contributed to by Elizabeth Rayne.

It's a fan thing
Join SYFY Insider to get access to exclusive videos and interviews, breaking news, sweepstakes, and more!
Sign Up for Free
All Posts About
Features
Movies
Videos
Legit or Bulls***
Original Video
The Lion King
Related Stories

Everything You Didn't Know About iconic anime Saint Seiya, explained