The Question: Convergence, art by Cully Hamner and Dave McCaig

Usually remembered for her time on Batman: The Animated Series in the ‘90s, Renee Montoya was the red jacket-wearing partner of the proudly obtuse Harvey Bullock, assisting Batman (sometimes on the sly) in direct opposition to her partner’s character-defining disdain for vigilantism. She was eventually introduced in much the same capacity, although her life quickly took an exceedingly dark turn which would lead to her resignation from the force.

Briefly enjoying a stint as the antihero known as the Question in the comics, then later appearing as the jilted lover of Barbara Keen in Gotham, and then, most confusingly, returning to her role as Harvey Bullock’s partner, Renee Montoya has traveled a long way to not go that far. Through it all, she has been one of DC’s best beloved, most underrated characters. We’re all hoping to see a more definitive take on Montoya in the upcoming Birds of Prey than we’ve seen in TV and film thus far, but first, let’s take a look at who Renee Montoya is. 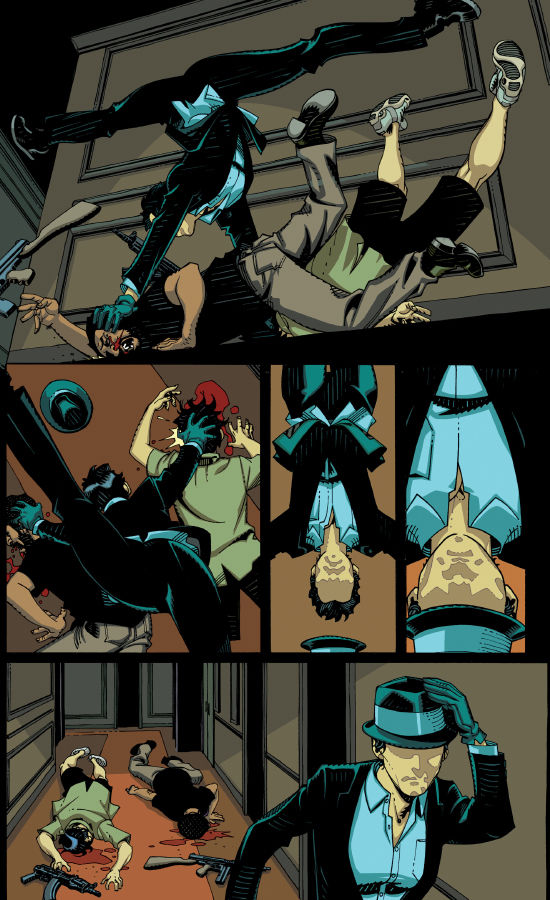 Renee Montoya first appeared in Batman: TAS as the more tolerant and patient partner of Harvey Bullock. Bullock being intolerant and generally written as willfully insensitive and rude makes his partnership with Montoya read like a classic comical mismatch of personalities, but Renee does seem to learn a lot from Bullock in her own way. She doesn’t allow herself to be pushed around, but this is undoubtedly a kinder, gentler Renee, shy of a few broken bones and broken hearts that would eventually transform her into the more blunt, to-the-point version of the character we would later see in the comics. They were a close although occasionally adversarial team all through the animated series. When we saw Montoya, it was in context to her work with the GPD as Bullock’s partner. This continued into the comics, although she was quickly promoted to detective.

While working as a detective, she became the victim of a harassment campaign by the villain Two-Face, who was convinced that Renee was destined to be romantically involved with him, later becoming violent and unstable when he discovered she was not only uninterested in a romance with him but was also a closeted lesbian. The language around Renee Montoya and Harvey Dent is generally problematic, and his stalking, kidnapping, outing, and attempting to ruin the life of Renee is loosely defined as him “falling in love with her,” which is certainly not how acts of stalking should be characterized. This is not a man who simply doesn’t understand the difference between right and wrong. In fact, his entire theme is based on extremes between right and wrong and how a surface-level “good” action might still be corrupt when the motivations are as sour as Dent’s are. Montoya does not express an attraction to Dent, and yet he pursues her, and when she refuses him he outs her and attempts to take everything from her. This is not a charming unrequited crush; it’s a mirror image of the abuse and gaslighting that is leveled against people by their stalkers, and the fact that it is targeted at the queer daughter of Dominican immigrants and subsequently reduced as being nothing more than Two-Face “barking up the wrong tree” is telling.

It is a hugely important character beat that Montoya was at one time a cop but it is likewise important to her development that she left the GPD because she herself was stalked by a known murderer, then outed and treated differently. After this, she became obsessed with exposing the corruption of the GPD, to which she ultimately lost her partner Crispus Allen. Allen in his capacity as a co-worker provided Renee with one of her most genuinely productive and healthy relationships and she was devastated by his death. The storyline in and of itself might be questionable, but in retrospect as a part of Montoya’s past, the outing of Montoya as a lesbian adds something to her overall character in that she suffered through some of the realities of homophobia which often go unaddressed by straight writers working on queer characters. Still, by the end of her time on the GPD, Montoya is left reeling. She is alone after her girlfriend leaves her, disowned by her parents, and suffering from alcoholism.

Vic Sage and the Question

In 52, Montoya becomes the partner of the Question, A.K.A. Vic Sage, and is reunited with her ex Kate Kane, who is on her own journey to becoming Batwoman. Montoya herself takes on the persona of the Question when Sage passes away. The end of 52 seemed to be setting up Montoya and Kane to work together, but the Batwoman series went in a different direction and Renee was seldom utilized as a character besides a short stint in back-up stories and a few mini-series and crossover appearances such as Final Crisis and Blackest Night. Criminally underutilized in her time as the Question and then reduced to simply going back to the force when the DC Universe was once again rebooted, Montoya’s time as the Question began in an incredibly promising light only to dim significantly and fade entirely.

In her many appearances and incarnations, Kane and Montoya’s stories are tied together, and they do compliment one another well, both as ex and current love interests. Kate’s passionate romanticism in contrast to Montoya’s cynical existentialism is always a delight to read, so hopefully, they can continue to make appearances together. When they can put aside their distrust and fear of being hurt, they make a great pair. Most of the character growth we’ve seen from either of them was inspired by the other’s attempts to be a better person.

Current DC continuity has returned Renee to her existence before significant character development occurred, the partner of Bullock, assisting Batwoman as an ally on the force. Although it’s great to see Renee in any capacity, this is reductive and works to undo a great deal of the cynicism but also the skill and confident individuality that Montoya had developed during her time as the Question. As recently as the Batwoman Rebirth series, she and Kate were reconciled, but only as the series ended. 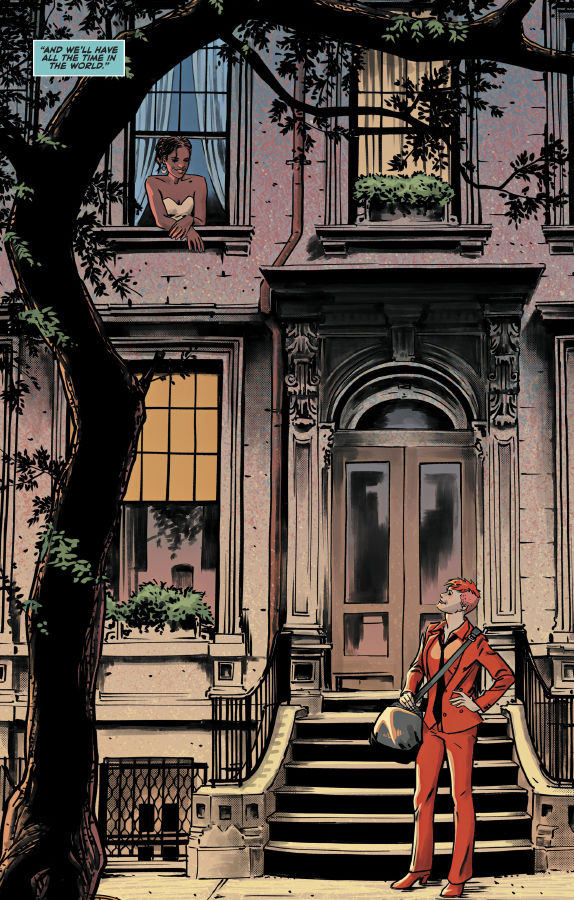 Anna Ramirez from the Christopher Nolan Batman trilogy is said to be loosely based on Renee, although in truth the only similarities between the characters are superficial. Ramirez is indeed the most duplicitous character in the films because she is the one that lies about her true motives. Every other character is loud and clear about why they do what they do. Even the Joker’s disguises and changing origin story don’t diminish his clarity of purpose. Meanwhile, Ramirez is low on characterization in a way that Renee has never been. Renee stayed in the closet for a long time, but to equate that with Ramirez’s manipulations would be incredibly problematic. Meanwhile, although Ramirez is undoubtedly a villain, everything she does is to help her ailing mother and is therefore not entirely morally bankrupt, though her manipulation is indeed short-sighted and wrong.

In contrast, while the Fox TV series Gotham has done a lot of interesting things with many of its characters, their take on Montoya was disappointing in that it missed key characteristics and failed to fill them in with anything besides an obsession with James Gordon’s then-fiancee Barbara. Much of the commentary on the Gotham Police Department in Gotham is to illustrate how rapidly a gradual slide into corruption can occur even within the most moral of hearts, but the depth this is usually accompanied by is absent with Renee. This take on Montoya had a lot of potential, but ultimately it frustrates by failing to flesh out what it is exactly that makes her so interesting.

In Birds of Prey, Rosie Perez will be taking on the role of Renee Montoya. The creative team is impressive, and the excitement of seeing the Birds of Prey lineup on the big screen with characters like Cassandra Cain and Harley Quinn is not to be diminished. Indeed, Perez in the role of Montoya might offer us a definitive take on a character that has long been misunderstood in the DC cinematic universe and underutilized in the comics.

Renee Montoya is a fan favorite, and she’s been one of DC’s most interesting characters since her early appearances on Batman: TAS. Her development has been rocky, but it served to make a much more complex character. Although different interpretations of most comic book characters are now to be considered a given due to the various mediums utilizing these stories, there is still something to be said for what works, what doesn’t, and what it is exactly that keeps bringing fans back for more with their favorite characters. Montoya’s traits as a loner and an outsider who both fears and desires intimacy are compelling, but unfortunately, that’s generally the extent of her characterization. She deserves a definitive story arc after all this time.

It's a fan thing
Join SYFY Insider to get access to exclusive videos and interviews, breaking news, sweepstakes, and more!
Sign Up for Free
All Posts About
Comics
Fangrrls
Movies
You May Also Like
Recommended by Zergnet
Latest on SYFY WIRE