Let Disney+ help you spend One Day at Disney

With all the original programming currently on and coming soon to Disney+, the streaming platform seems like it might just be the gift that keeps on giving for Disney fans. But seemingly buried in the excitement surrounding The Mandalorian and the several new Marvel shows that have been announced for next year (and beyond) are a number of fantastic original shows not tied to a blockbuster franchise. And that's unfortunate because a few of them should definitely be on your watchlist.

One Day at Disney is a brand-new property that drops this week in a uniquely exciting format. A feature-length documentary lands on Disney+ and a gorgeous coffee table book arrives in bookstores (and at online retailers) on December 3. But that's not all. The documentary is just the launch of a much bigger project, which will ultimately include 52 short films.

So what is it? In a nutshell, it's the product of an ambitious project to chronicle a single day across the Disney company around the world: February 21, 2019.

One Day at Disney spotlights many of the employees who don't normally find the spotlight: From the fruit and vegetable sculptor at Disneyland Paris to actors in The Lion King musical to the steam engine engineer at Disneyland to creative executives at Walt Disney Imagineering to Bob Iger himself. (OK, Iger usually finds the spotlight easily enough, but he's one of the few exceptions.)

The conceit of the project (the book, documentary, and short-form series) was to take a snapshot of the company and try to capture the incredible scope of the work happening on a single, "ordinary" day across the Disney parks and resorts, film studios, TV studios, Imagineering, stage productions, and more.

The book, as I said, is gorgeous. It features 79 different cast members who agreed to "open up their workshops, dressing rooms, kitchens, cubicles, TV studios, labs, locomotive engines — and some even more surprising and diverse workspaces." Many of these profiles also appear in the documentary, and then the 52-episode short-form series will take a deeper-dive focus on individual cast members.

SYFY WIRE recently had a chance to sit down with author Bruce C. Steele and pick his brain about the book, the massive One Day at Disney project, and the stories that resonated with him. 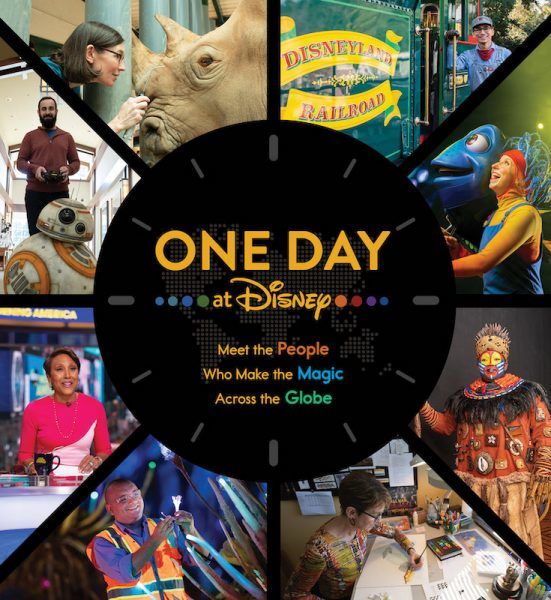 How did you get attached to the project?

I've been contributing to Disney Twenty-Three magazine for several years, writing cover stories on Beauty and the Beast, Coco, Mary Poppins Returns, and other topics. Since those stories involved a lot of interviews with people doing any number of unique jobs, the folks at Disney thought of me for this project.

Does the book include all the profiles we'll see in the documentary and series?

I interviewed every cast member in the book, in most cases before the video crew interviewed them. The book is the basis for the video series, not the other way around.

Were you surprised by any of the personal stories profiled in the book? Did anything make you go, "Huh, I had no idea it's someone's job to do that"?

A lot of the cast members in the book had jobs that it had never occurred to me existed, but they're jobs that make perfect sense when you think about all the effort that goes into every detail of Disney entertainment.

My favorite examples are Cyril Soreau, who invented the job of fruit and vegetable sculptor for himself at Disneyland Paris; and Thom Self, who's a scuba-diving machinist who dives into the water of the Jungle Cruise and other water attractions in the middle of the night to maintain the equipment.

Pixar's Tia Kratter is another good example: She began her career as a background artist for Disney animated features, then worked as a shading art director on Pixar movies, and now she runs Pixar University, the studio's continuing education program. So she's had a range of jobs people may not immediately think about in connection with Disney and Pixar movies.

Whose story has stuck with you the longest?

That's an easy one. Actor Katie Whetsell, who portrays Dory in Finding Nemo: The Musical at Disney's Animal Kingdom, told me the most heartbreaking story about taking her mother to Walt Disney World when her mom was battling the cancer that eventually took her life. The magic Katie, then a teenager, and her family felt on that trip has stayed with her throughout her life, and her story has stuck with me. Readers and viewers of the Disney+ series will need to have tissues handy when they get to that one.

How much of what we see (both in the book and the show) actually happened on the same day? How much is just representative of what happens on a typical day?

Every photo in the book, including my author photo, was shot on that One Day at Disney. The goal was to show the scope and diversity of what's happening at Disney properties on any given day, and I think the book does just that.

I was only able to be at one place on February 21, of course, but several of the Walt Disney World profiles include observations from that day. The day was selected in part because there were no holiday celebrations ongoing at the parks or other sites, so you can just imagine how much more goes on during, say, Christmas season or Mother's Day or sports playoffs — and so on and on.

Now that you have a much fuller idea of what happens across the Disney company on a given day, whose job would you want if given the choice?

So many people told me they had the best job in the company, it would be hard for me to choose. If I could be magically blessed with the many skills of a veterinarian who cares for exotic animals, I'd step into the shoes of Natalie Mylniczenko, who looks after all the creatures great and small at Disney's Animal Kingdom and other Walt Disney World sites. Her job is a daily adventure, and I could tell from meeting her how satisfying she finds it.

But if I have to stick to my existing skillset, I'd be happy to take over for Joseph Hernandez as one of the captains of the Mark Twain Riverboat at Disneyland. Every trip around the Rivers of America brings on a new audience to mingle with, and it's one of the few jobs in the book that hasn't changed significantly since the days of Walt Disney himself.

What message do you hope readers take away from the book?

The cast members I interviewed shared one value, to a person: They were not satisfied until they found an occupation that in some way fulfilled their dreams or at least put them on the path to reaching their dreams. They did lesser jobs to learn the ropes, waiting for their big break. They relocated their lives to be where they wanted to be. They got the education they thought they needed to join Walt Disney Imagineering or another division. They were their own best advocates for why they should get the job.

Not everyone can work for the Walt Disney Company, of course, but everyone has the capacity to plot a path to their dream and then do what it takes to walk forward.