Marvel Comics' latest crossover event series, War of the Realms, kicked off Wednesday, and it looks to be a bloody affair. The first issue of the series alone spread carnage throughout the Marvel Universe, and claimed the lives of two major characters.

*Spoiler Warning: There are spoilers for War of the Realms #1 below.**

War of the Realms, from writer Jason Aaron and artist Russell Dauterman, is a continuation of events Aaron's been building up for a long time in his ongoing Thor saga. Before the event's first issue has even kicked off, the Dark Elf King Malekith the Accursed has laid waste to every other realm but Midgard (Earth), building a vast army of frost giants, trolls, war angels, fire goblins, and more dark creatures.

The first issue of the six-part event miniseries begins with Malekith preparing for his assult on Midgard itself, and he has a few preliminary tass to accomplish before he does that.

First, on Midgard itself, Loki appears — bloodied and dying — to Thor, who convinces his mischievous brother to use Malekith's own dark Bifrost (because yes, Malekith has his own Bifrost now) to take him to the Dark Elf for a confrontation. Loki turns out to be Malekith in disguise, and Thor is transported to Jotunheim, where he's trapped in battle against a horde of frost giants.

On Asgard, which is little more than a ruin now after the Rainbow Bridge was shattered, Odin sits alone on his throne after refusing to follow the other Asgardians to Earth, where they now live as refugees in New York City under the leadership of Odin's wife, Freyja. As Odin sits contemplating his situation, Dark Elf assassins descend on him, and unless the All-Father has a trick or two up his sleeve, that seems to be the end for him. 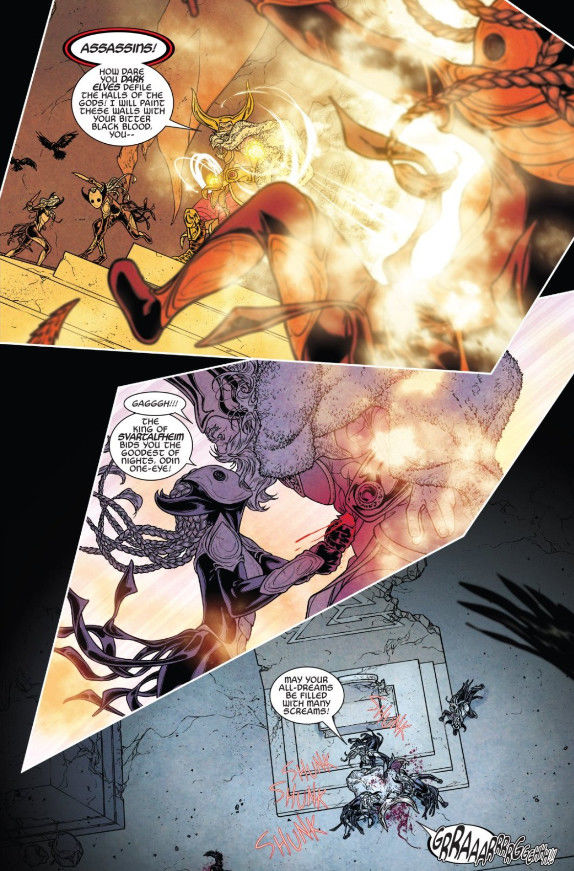 With Odin dead and Thor on Jotunheim, Malekith stages his assault, marching an army of dark warriors into New York City. Freyja (who fought off her own pack of assassins with the help of Spider-Man), Sif, and Jane Foster mobilize the able-bodied Asgardians to fight, while Spider-Man, Daredevil, and The Punisher each launch their own counter-attacks. Then The Avengers, led by Captain America and Black Panther, show up, and the fight is on.

Things take a turn when Laufey, King of the Frost Giants, picks up Freyja to kill her, only to have his hand cut off by Loki, the real Loki this time. Loki was working with Malekith, but the Dark Elf sent his own assassins after the God of Mischief, and now Loki seems to be fighting on the side of right. He tells Freyja that Thor is their only hope of victory, and then to prove he's serious, he lets Laufey pick him up. We've seen Loki leave this realm before, but never quite like this. As the Avengers and Asgardians look on, Laufey eats his biological son alive. 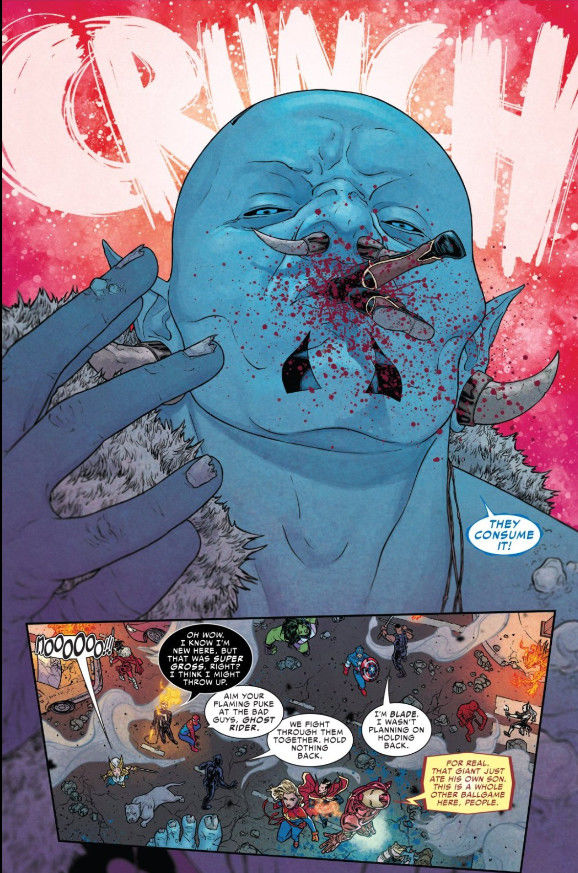 Loki and Odin (if Odin really did die from his wounds) are Marvel Comics characters, and that's well-known to be a world in which no one stays dead except Uncle Ben. Plus, these are Asgardians we're talking about. They've forgotten more ways to cheat death than other characters will ever learn. Still, even with those caveats in mind, this is a hell (or Hel, if you'd prefer) of a way to kick off this event, by taking out two of the most prominent Asgardian characters in your universe.

It also raises a number of interesting questions. Why did Loki come bringing that message about Thor? Why was he so ready to die? Is he planning something bigger than just letting Freyja know about Thor's importance? is this all part of some bigger piece of mischief? With Loki, it's always good to remember that nothing is ever simple, so we'll just have to keep reading to find out.