Nightmare torments Doctor Voodoo in Doctor Voodoo: Avenger of the Supernatural #4 with a cover by Marko Djurdjevic. (Credit: Marvel)

While Nightmare may seem like an obscure villain for the upcoming Doctor Strange sequel, Doctor Strange in the Multiverse of Madness, the character is actually one of the Master of the Mystical Arts' original foes; Nightmare made his debut alongside the good doctor in Strange Tales #110. Marvel hasn't revealed many additional details about the Doctor Strange sequel, aside from its release date (May 7, 2021) and that it somehow ties into the Disney+ show WandaVision, but if Marvel Studios President Kevin Feige and the company have decided on a villain, Nightmare seems like the perfect antagonist this time around.

As the sequel is expected to be horror-tinted fare, introducing Nightmare could open up new realms of characters and new possibilities in the Marvel Cinematic Universe.

See, in Marvel Comics, Nightmare is a Class Three demon (on the level of such monsters as Dormammu, Shuma Gorath, and Cthulhu) who rules the Nightmare World, which is located within the Dream Dimension. Feeding off humanity’s collective psychic dream energy, Nightmare terrorizes humans and superheroes alike, often trapping them in their worst nightmares. In addition to facing off against Doctor Strange numerous times, Nightmare has also plagued heroes such as the Hulk, Daredevil, Ghost Rider, Spider-Man, Captain America, Wolverine, and Cloak & Dagger.

This week, SYFY WIRE took a look at the ancient villain's comic book history and spoke with former Marvel Comics writer Ann Nocenti, who has written both Doctor Strange and Nightmare, to see how the character could fit into the MCU.

In Strange Tales #110, the story only hints at Nightmare's existence in the last few panels of the six-page story "Dr. Strange, Master of Black Magic." In the story, Strange attempts to help a man plagued by nightmares, and with the help of the Ancient One and his amulet, he enters the man's dreams, wherein he encounters Nightmare.

"So, it is Dr. Strange! You have entered the Dimension of Dreams for the last time. Never again shall you thwart me," Nightmare says. "You know the rules of sorcery, Dr. Strange! Those who enter a hostile dimension must be prepared to pay for it — with their lives."

Although he predates both, Nightmare is basically a mashup of Freddy Kruger and DC Comics' Sandman. An ageless demon, he rules the Nightmare realm, feeding off the bad dreams of humanity. In the comics, he's attacked Spider-Man with nightmares of fighting the Hulk, taken control of the bodies of Doctor Strange, Morbius, and Ghost Rider, and plagued the Hulk with visions of a shattered homelife, monsters, and demons. During his timeless existence, Nightmare has also sired three offspring into the Marvel Universe: the Dream Queen, Daydream, and Trauma.

Early Nightmare appearances include Strange Tales #116 and #122, as well as Doctor Strange (Vol. 1) #170 and #180-182. Nightmare, like Dormammu and many of Doctor Strange's cast of villains, often comes across as a totally overpowered foe, forcing the Master of the Mystic Arts to use his intelligence to outwit the villain and save the day, since he lacked the sheer power to beat Nightmare with spells alone.

Dr. Strange escapes Nightmare with the aid of his amulet in Strange Tales #110. (Credit: Marvel)

Plans to bring Nightmare into the MCU and rumors about when, exactly, that will happen have been floating around for almost five years. In 2016, Doctor Strange director Scott Derrickson told IGN he had wanted to use Nightmare in the first film but it would have been too complicated.

"We decided not to do that because that’s a bit of a complex idea to try to introduce everything we do introduce and introduce the idea of nightmares themselves as being a dimension," Derrickson said at the time. "I hope somewhere down the line we do get to explore that because I think that’s a super cool concept.”

Dr. Strange again must face off against Nightmare in Doctor Strange #34 by Ralph Macchio and Tom Sutton. (Credit: Marvel)

Treating the Nightmare Realm as its own dimension would certainly open up a vast array of options for the MCU moving forward. For one, the MCU could tap into the Fear Lords, a group of supernatural creatures who feed on fear and have teamed up against Doctor Strange in the past. In addition to Nightmare, the team includes demons such as Nox, Straw Man, The Dweller-in-Darkness, and Kkallakku.

Additionally, it could allow MCU producers to explore Everinnye, the dimension from which both the Dweller-in-Darkness and Nightmare originate from. According to the official Marvel Handbook Vol. 4, “the ectoplasmic denizens of that dimension can exist in physical form by disembodying their heads.” Classic.

With the multiverse being explored briefly in the first Doctor Strange film, and its name being referenced in Avengers: Endgame and Spider-Man: Far From Home, Phase 4 could mark a new direction for the MCU, especially as the new Doctor Strange film will tie into WandaVision. The reality-warping powers of Wanda Maximoff, aka the Scarlet Witch, are well known and have resulted in comics story arcs such as House of M, Avengers Disassembled, and Decimation.

With the title of the new Doctor Strange movie being “Multiverse of Madness” there’s a good chance the hero could also travel to or learn of the “Realm of Madness,” a mystic realm in the comic books in which one's greatest fears take on a tangible form. Adjacent to Nightmare’s realm, it exists beyond the Dream Dimension as well, and plays host to a legion of demons who are natural enemies to Nightmare, including Delusion, Dementia, Fetish, Megalomania, Necromancer, Neurotica, Obsession, Paranoia, Phobia, and Psychosis. In past storylines, Nightmare has occasionally teamed up with the demons to prey upon humans.

Nightmare has often traveled to Earth, sometimes as a tourist looking for souls to trap and sometimes even looking for love. In Nocenti’s Nightmare series from 1994, Nightmare traveled to court horror movie actress Roxanne in the mortal guise of Edvard Haberdash.

Nocenti tells SYFY WIRE she doesn't think of Nightmare as a total villain so much as an entity who reflects the nightmare realm of sleep and dreams, the dark parts of the subconscious. Nocenti was an editor on Doctor Strange books in the 1980s when Roger Stern was writing, and cited Stern's take on Strange as an influence.

"I loved not just the character of Doctor Strange but the occult stories you could do with him. I was a Steve Ditko fan and adored his Doctor Strange stories, and was always intrigued by Carl Jung's take on the collective unconscious as an actual place, like Nightmare's realm," she says. "I mean, he can't help being who he is. In the way that Thanos is death, Nightmare can't help but to be a nightmare.

In her story, Nocenti focused on "what if Nightmare tried living as a human, drawn by the power of falling in love?"

"But of course, being Nightmare, his idea of love was warped and obsessional and stalker-like," she adds. "Like, 'love me or I'll kill you.' The test was whether or not being a human would help him understand humanity, and would he change? The answer is no!

"Also, Nightmare's narratives should reflect nightmares, in that they are illogical, leap from place to place, and are steered by fear. So it was a cool narrative challenge," she continues. "During Nightmare's time posing as a human, though, his abandoned Nightmare realm goes nuts, which as I recall means everyone's nightmares are a mess. And the artist and I had fun world-building Nightmare's realm, adding illogical nightmare characters Dementia, Exile, Neurotica, Phobia, and other entities that I imagined would gain power in the Nightmare realm because humanity's neurotic, phobic, and demented nightmares feed them and keep them powerful." 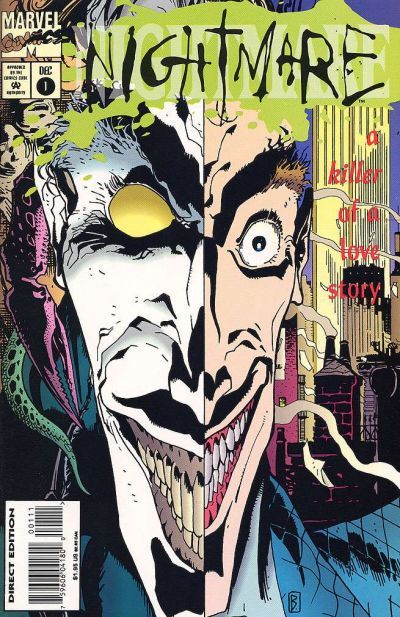 While Nightmare enjoys taking his trips to Earth, the Dream Dimension is unstable without him. In several storylines, including his own miniseries, the collapse of the Dream Dimension has factored into different ways Doctor Strange has managed to best his oldest foe. In his battles against the Avengers and other superheroes like Doctor Voodoo, Nightmare has managed to claim Earth but only for a short while.

In the Incredible Hulk #298, Nightmare was reintroduced as having plagued Bruce Banner for years. In this issue, Nightmare (via writer Bill Mantlo) reintroduces himself and assures the reader that he is present in everybody's dreams. By plaguing the Hulk with terrible nightmares, Nightmare realizes that he has actually been creating a psychological rift in the Hulk's subconscious. Whereas once the mind of Bruce Banner maintained control over the Hulk, now the monster has reverted to a state of nearly total savagery, something other Hulk storylines have revisited, including the current Immortal Hulk series.

Hulk faces down Nightmare in his sleep in Hulk #81 by Peter David and Lee Weeks. (Credit: Marvel)

How Nightmare could eventually fit into the MCU is anyone's guess, but with his immense intelligence, supernatural powers, and strength, he's sure to be a challenge for Doctor Strange. We're eagerly awaiting our first peek of the extra-dimensional demon atop his black-winged horse, Dreamstalker.

Nocenti said she's excited to potentially see Nightmare in the next Doctor Strange film because "although he's insane, he understands the power the subconscious has on the mind.

"People spend fortunes on analysis couches trying to remember the things that impacted on their unconscious, but in the end that stuff is kind of unknowable and continues to steer your actions whether you like it or not. And let's face it, Doctor Strange has issues," she says. "And Nightmare can't be beaten, because as an 'entity' fueled by all of humankind's nightmares, he will never go away unless all of humanity does (and vice versa, I imagine). Doctor Strange can't beat him forever. As long as there are still people having nightmares, Nightmare will live."

Marvel's What If...? brings in Dr. Strange for a dark and heartbreaking episode