In the world of literary science fiction, Michael Crichton is hailed as one of the top authorities who've made the unbelievable ... believable. Crichton, who sadly passed away in 2008 at the age of 66 from cancer, had a magical way of making you feel like cloning dinosaurs was just beyond the horizon of modern scientific advancement. His books are larger than life, but they're also relatable and accessible.

It's a difficult balance to strike and the Jurassic Park author walked the line extremely well — and sometimes better than most.

Looking at the current pandemic, The Andromeda Strain immediately springs to mind. Crichton's 1969 novel about a devastating alien virus (it literally comes from outer space) that drives a group of researchers to the brink of destruction in the New Mexican desert is a chilling tale that no longer feels as removed from our reality as it once did. So, what would the late writer make of COVID-19?

"I've been asked that question so many times in the past few weeks, and Michael’s The Andromeda Strain has been quoted quite a bit as one of the books that foreshadowed our current health crisis,"  the late writer's wife, Sherri Crichton, tells SYFY WIRE. "Michael was extremely curious and had very strong opinions. He loved the ‘What if’ scenarios and liked to provoke dialogue ... I know he would be alarmed and devastated by the loss of lives across the world and would want to participate in the dialogue to find solutions."

After two live-action adaptations in 1971 and 2008, The Andromeda Strain finally received a sequel last fall from Robopacalypse scribe Daniel H. Wilson. The Andromeda Evolution (whose paperback edition goes on sale on Tuesday, May 19) continues the story of Project Wildfire when a mutating microbe not of this world is detected in the South American jungle.

"In general terms, Michael fathered a new genre when he wrote The Andromeda Strain — the techno-thriller. It was no longer science-fiction, it was science-facts," Sherri continues. "And he did it by writing the book as if the situation was really happening. We tried, and I think succeeded, to emulate a similar approach with The Andromeda Evolution. I have always admired authors like Michael who wrote with a purpose, and in this case, analyze how humans would react in the face of a pandemic.  It makes you think, and it makes you question science and the world at large in the most profound way."

Wilson penning a sequel to one of Crichton's most iconic works made us wonder if the author's estate is planning any other follow-ups with new writers taking inspiration from the master.

She adds: "I’ve been on a mission to re-introduce Michael to new generations. It was amazing to see the success of the 50th-anniversary edition of The Andromeda Strain, even before our current situation. I want all of Michael’s titles to stay in print and to be readily available for all the young people watching Westworld and realizing that Michael created that story in his 1973 film version. And same with Jurassic. Evidently, with the exciting new platforms today, there’re many ways to re-imagine Michael’s worlds through series, remakes, sequels, prequels even! It is a lot of work, but it has been empowering to realize how alive Michael still is through all his writing and all the projects that can come from it."

At this very moment, a third Jurassic World is on the way from writer-director Colin Trevorrow. Set for release next summer, the threequel — subtitled Dominion — is set to bring back the franchise's three original protagonists: Alan Grant (Sam Neill), Ellie Sattler (Laura Dern), and Ian Malcolm (Jeff Goldblum). While Sherri isn't directly involved with the trilogy, she did get to visit the sets of the first two entries with her son, John, and step-daughter, Taylor.

"It’s always both sad and happy experiences as I know how much Michael would have enjoyed the enduring power of this story, and how much he would have wanted to be on-set with his son and his daughter, Taylor, to whom he dedicated the book Jurassic Park," she says.

Steven Spielberg's Amblin, which produces the Jurassic World series, is also developing a film adaptation of Micro, a 2011 novel about a group of graduate students who are shrunken down to a minuscule size and left to fend for themselves in a Hawaiian jungle. Richard Preston (The Hot Zone) stepped in to complete the project, as Crichton was unable to finish writing it before his death. 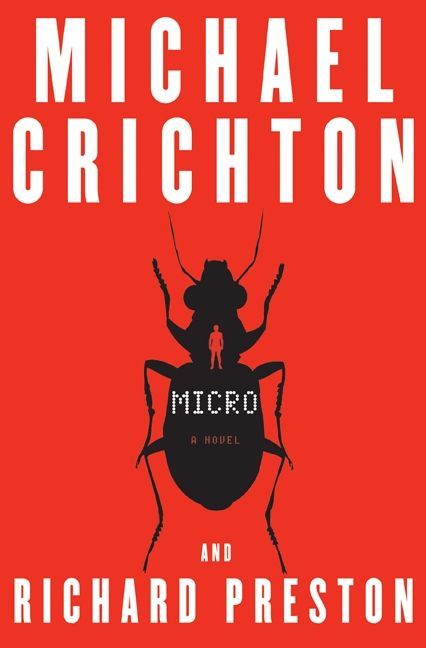 Last we heard, Now You See Me 3 scribes, Neil Widener and Gavin James, were writing the screenplay, with Joachim Rønning (Pirates of the Caribbean: Dead Men Tell No Tales) attached to direct. Sherri, Laurent Bouzereau, and Frank Marshall (Spielberg's longtime producing partner) are all executive-producing.

"It has been an amazing journey to work on this project with our partners at Amblin," Sherri continues. "As you probably know, Michael was writing the book when he passed away and it has been my mission to bring it to the screen. It is Michael’s tribute to Fantastic Voyage — and it also showcases his love of nature. It is a cautionary tale about regaining an appreciation of our planet."

The Crichton-y goodness continues at HBO, which recently ordered a fourth season of Westworld from Jonathan Nolan and Lisa Joy. As Sherri alluded to, it's the rare adaptation that doesn't draw from one of Michael's books.

Nevertheless, his 1973 movie about a futuristic theme park modeled after the Old West remains a staple of the sci-fi genre. How could it not when you've got Yul Brynner playing an out-of-control cowboy android? The 21st-century interpretation (following a big-screen sequel and short-lived TV show) is full of enough heady concepts, shocking twists, and existential questions that would do Crichton proud.

"[Michael] would be thrilled to see a young generation of filmmakers being inspired by his original creation," Sherri muses.

It's a fan thing
Join SYFY Insider to get access to exclusive videos and interviews, breaking news, sweepstakes, and more!
Sign Up for Free
All Posts About
Movies
News
TV
Jurassic Park
Michael Crichton
Micro
The Andromeda Evolution
The Andromeda Strain
Westworld
You May Also Like
Recommended by Zergnet
Latest on SYFY WIRE