The release of Captain Marvel has given MCU fans the chance to hang out with old faves and new faces and, apart from our titular hero, the Rambeaus were an exciting new addition. Of course, Carol Danvers’ best friend Maria has had a bit of a retcon from the comic book where, in the Earth-616 continuity, she was a seamstress, not the formidable Air Force pilot doing her thing in the latest movie. With Maria’s daughter Monica, however, there is a lot more potential for aspects of her original comic book backstory to be realized on the screen and I personally hope this will lead her towards the Black Panther sequel.

Captain Marvel doesn’t showcase much of what Monica gets up to in the comics, thanks to the 1995 setting positioning her as a child, but by the time the MCU returns to the present-day timeline, post-Avengers: Endgame, she’ll be an adult and ready to take up her heroic mantle. On the page, Lieutenant Trouble grows up to become a real lieutenant in the New Orleans Harbor Patrol and gains superpowered ability to convert her body into energy after being exposed to an other-dimensional energy-tapping device while trying to stop a criminal scientist. If you’re wondering why that sounds so familiar to the way Carol Danvers gets her powers, that would be because Monica was Captain Marvel first.

Rambeau was created by writer Roger Stern and artist John Romita Jr. and appeared for the first time in October 1982, in The Amazing Spider-Man Annual #16. She was given the Captain Marvel moniker (in order for Marvel to retain the rights) by the media, and after joining the Avengers to learn how to control her powers she ends up leading them too. Of course, with Brie Larson only just making her debut in the MCU, it would be odd for her to pass on the title to another actress already, especially as these big Marvel stars nowadays sign on for multiple-picture deals.

Monica could continue to appear in the Captain Marvel movie franchise even if she doesn’t get that particular superhero name. In the comics, she’s gone by the names Photon, Pulsar, and Spectrum, so writers could take this into account for future installments. There is the issue that Carol and Monica’s powers would basically be the same, but that didn’t stop Iron Man 2 from Tony Stark and Rhodey suiting up in practically the same super suit. That being said, it would be a bit boring if Marvel just regurgitated that storyline — so why not introduce Monica into the Black Panther franchise?

Photo: Marvel Studios
As Photon, Rambeau teamed up with T’Challa alongside Luke Cage, Blade and Brother Voodoo to rid her native New Orleans of a vampire cult, as well as with the Wakandan hero in a new Ultimates run too. Monica was popular with Wakandans, who dubbed her the Sun Goddess, and it was even implied that she and Black Panther had more than just a platonic friendship as she admitted that it was hard for her to watch his marriage to Storm. She also isn’t the only Monica T’Challa has had a romantic relationship; Monica Lynne, a singer, was a prominent figure in his life and was even engaged to him at one point.

An obvious move would be to intertwine these two Monicas into one as a love interest for Black Panther in the sequel, but that would be detrimental to the work Ryan Coogler has already done to empower his female characters beyond the romantic tropes of the book. He already retconned the backstory of Nakia so that she wasn’t the petulant teen warrior of the Dora Milaje whose jealousy of Monica Lynne led her to throw the singer out of a plane. Instead, Coogler created a more three-dimensional character for Lupita Nyong’o to play, who had her own agency — working as part of the War Dogs — and wasn’t the one pining over T’Challa. He, on the other side, was clearly in love with Nakia so it would be too jarring to throw Monica Rambeau into the mix to create a dated love triangle scenario. 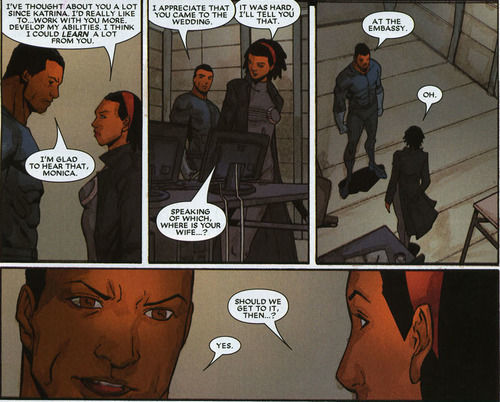 Monica Rambeau and Black Panther in the Marvel Comics

Photo: Marvel Comics
Instead, Monica could be introduced as either an ally of Nakia or someone Black Panther and Shuri team up with on the ground in California. Shuri’s there setting up shop for the Wakanda outpost in Oakland already, and as we’re soon going to be saying farewell to most of the Avengers this would be a perfect movie to lay the groundwork for a new line-up.

As stated earlier, Rambeau was the leader of the Avengers so she could be part of the new roster that includes herself, Black Panther, Captain Marvel, Spider-Man, Doctor Strange, Shuri, and fingers-crossed, Kamala Khan’s Ms. Marvel too. There is so much potential for Monica’s character to play a significant part in Phase 4, especially as a black female superhero, and it would be sad to see her go the same way as Felicity Jones’ Felicia Hardy in The Amazing Spider-Man 2 and not get a chance to flex her superpowered muscles.

This could also give DeWanda Wise a chance to return to the Marvel Cinematic Universe after being forced to drop out of her role as Maria because of scheduling conflicts with the Netflix series She’s Got To Have It. If she’s busy, there are plenty of other black actresses who deserve an opportunity to play a hero in what is still a rather white male-dominated universe.

Monica Rambeau is a force to be reckoned with and deserves to shine in her own right as a hero, and the response to her in Captain Marvel shows I’m not alone in thinking that. So let’s make this happen, Kevin Feige. Let’s go higher, further, faster for Monica too.