Fillion is no stranger to the vocal performance arena, having lent his heroic voice to the character of Hal Jordan in numerous DC animated features including Green Lantern: Emerald Knights, Justice League: Throne of Atlantis, Reign of the Supermen, and most recently Justice League Dark: Apokolips War. He also was a member of the all-star cast for the epic 2007 audiobook adaptation of Brooks' World War Z, along with Paul Sorvino, Jeri Ryan, Mark Hamill, Simon Pegg, Alan Alda, Martin Scorsese, John Turturro, and many more. 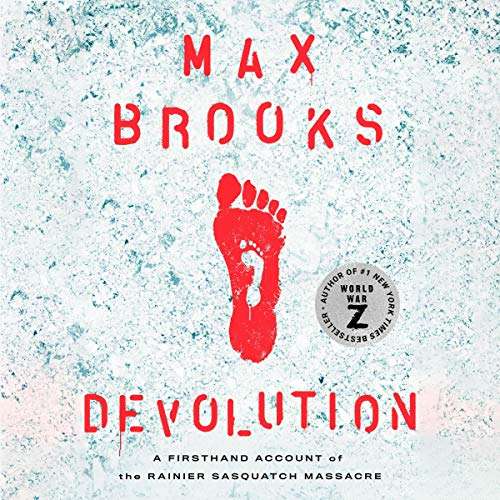 Huddle up and have a listen...

Devolution chronicles the fateful events following the ash and chaos of Washington's Mount Rainier erupting, and the isolated eco-community of Greenloop, which has been cut off from all civilization in the disaster's aftermath.

As the smoke settles, this band of unprepared and idealistic residents must fend for themselves when the grid goes down, as the surrounding woods become populated by savage bigfoot beasts. It's a lost survival saga recounted through personal journal entries and eyewitness accounts recovered and reconstructed from the digital age village's bloody wreckage.

Besides Fillion, many in this project's talent pool are very familiar with Brooks and audiobook narration. Mulgrew (Star Trek: Voyager, Orange Is the New Black) has narrated her own audiobooks as well as numerous titles by Joe Hill; and Steven Weber (Wings, iZombie) has participated in audiobooks by Stephen King and Harlan Coben.

Native American actress Kimberly Guerrero and Emmy Award-winning Jeff Daniels (Arachnophobia, The Martian) make their audiobook debuts here. Even public radio personalities Terry Gross and Kai Ryssdal voice fictional versions of themselves. Greer (Archer, Arrested Development), in the main character of Kate Holland, has previously narrated her own audiobook I Don't Know Where You Know Me From as well as Taylor Jenkins Reid's Daisy Jones & The Six.

This Week in Genre History: Serenity couldn't quite ignite Firefly on the big screen