In a teamup decades in the making, two Eisner Award-winning creators, Mark Waid and Neal Adams, are joining forces for a new four-issue Fantastic Four miniseries that showcases the majesty of Galactus and the Silver Surfer alongside Marvel's first family — and SYFY WIRE has an exclusive look at the debut issue to serve up, with musings from its masterful artist, Neal Adams. 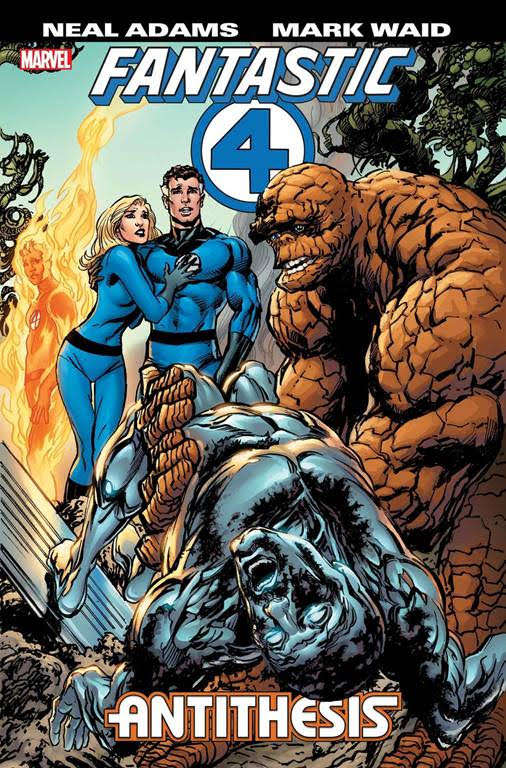 The plotline for this Fantastic Four adventure finds an unstoppable meteor of unknown origin barrelling out of hyperspace and aimed at New York City. Unless the Fantastic Four can discover a way to stop it from slamming into Manhattan, millions will perish. Toss in a killer new villain named Antithesis and you've got an ideal recipe for The World's Greatest Comic Magazine!

Adams admits that people have been asking him for years if there was any book or characters still on his bucket list. Now, he's checking a few more off.

"The truth of the matter is that any time I’ve asked to do something they’ve pretty much let me do it," he tells SYFY WIRE. "But every once in a while the subject of the Fantastic Four would come up and I realized, you know, there’s Jack Kirby and John Buscema out there and as far as I’m concerned that’s about the best you’re going to do. Those guys were great and they really delineated the Fantastic Four.

"There’s really only one Fantastic Four story. All the rest are just sorta there. It’s Galactus and the Silver Surfer. That’s it. This was where Jack Kirby introduced the Silver Surfer. He created this guy riding a surfboard through the galaxy and when we saw it, we loved it."

"So we had a conversation over at Marvel and they asked me if there was anything I’d like to do," Adams recalls. "And I said 'Yeah, I wouldn’t mind doing a bunch of Fantastic Four books.' They said 'Sure, you can do that.' I told them whatever we did it would have to include Galactus and the Silver Surfer and they’d all have a great time. Because that’s what the Fantastic Four is like. It’s the Human Torch playing jokes on Ben Grimm. It’s about Reed Richards and his wife. It’s like family, it’s the guys that live down the block. Jack Kirby and John Buscema did it every issue and it was wonderful."

"So we got Mark Waid, one of the better writers on Fantastic Four, and we went ahead and did Galactus and the Silver Surfer and the Fantastic Four," he adds. "We threw in the witch, Agatha Harkness, and we’ve got a new villain named Antithesis to take on Galactus, and we’ve got alien planets, and people destroying one another and going crazy.

"In all honesty I never wanted to do anything revolutionary on it. And maybe this will help the guys who are making the next movie to have a jumping off point. If they don’t, it’s fine. But if they do, you can feel like you’ve made a contribution. Fantastic Four is kind of a big soap opera. It’s the only real family in comic books. And I think that’s really what holds it together."

It's a fan thing
Join SYFY Insider to get access to exclusive videos and interviews, breaking news, sweepstakes, and more!
Sign Up for Free
All Posts About
Comics
News
Fantastic Four
Neal Adams
Related Stories

'Back to basics': How king of comic book rehabilitation John Byrne saved the Fantastic Four

Emily Blunt explains why she turned down Black Widow, sees through those Invisible Woman rumors

'The Super Mario Bros. Movie' levels up in full trailer