When the Caped Crusader's most famous sidekick, Dick Grayson, was trending on Twitter, some casual fans thought that he was getting a new movie or something of the link. But in-the-know comics fans probably suspected that the reason had something to do with butts — and they were right.

On Wednesday, Comics Bookcase debuted a series of prints from renowned DC artist Nicola Scott that referenced her Action and Detective #1000 variant covers. The Superman, Batman, and Wonder Woman prints, which all depict the iconic heroes in the various costumes they've worn over the years, are impressive, but Dick Grayson's print really had people talking. While all the other heroes are facing forward, the former Robin, who currently operates as the superhero Nightwing, was showing off what his maker gave him.

I’ve got a butt load of conventions over the next six weeks so here’s my new load-of-butt con print!

And our sale at https://t.co/lkOxIJZPUq continues! Make sure you swing by the site to pick up an original art piece to treasure! pic.twitter.com/ST8gINdY2g

Although more casual superhero fans might think the butt du jour is Steve Roger's peach — "America's Ass" — or one of the MCU's many other impressive behinds, DC fans know the longest-running and best butt in comics history belongs to Dick Grayson. When the boy wonder outgrew his Robin Suit and adopted the Nightwing moniker, it was butt time.

The history of Dick's butt is as long as his rump is tight and it has stood (firmly) for a couple of important things over the years. Not only is it a lob to the female gaze, appealing to those of us attracted to males and giving us eye candy we rarely get in comics, but his rear satirizes the way women are often portrayed in comics.

Fans came by the butt forward expectation honestly. In one of his earlier portrayals, when still cloaked in his disco-forward Nightwing suit, readers got a glimpse of dat ass. 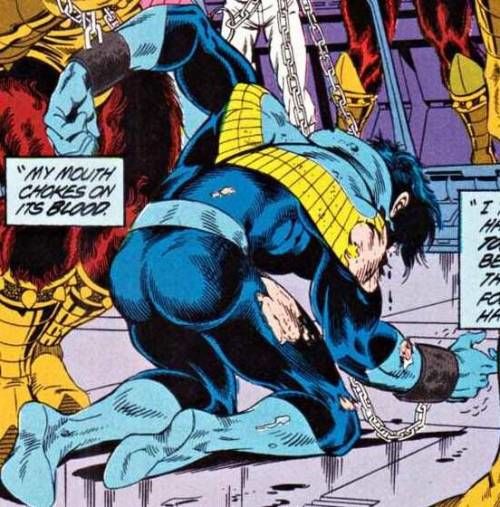 Nightwing may have left disco behind, but he didn't leave his behind ... behind. In Gail Simone's run of Secret Six, Nicola Scott penciled the now-famous image of Grayson in the "butt pose," a gratuitous, often spin-contorting position female superheroes are often forced into on movie posters.

It's gotten to the point where even characters inside the DC Universe know about Grayson's tush. In Tom King and Tim Seeley's Grayson #6, another character, Midnighter, is suffering from a condition that makes it hard for him to recognize faces, but he still ID'd Grayson from behind. He'd know that ass anywhere, this time drawn by Mikel Janin.

This gang's butt shots didn't stop there. King and company knew how distracting that gymnastics-toned appendage could be and gave us maybe the most realistic panel in comics in Grayson #8 of a few focused ladies.

King's Grayson story wasn't the only time the bat butt blew Dick's cover. In her story, Grayson had wanted Batgirl to think he was dead. The two grazed each other, Grayson taking extra care now to reveal himself as alive, but Batgirl clocked those cheeks a mile away.

In 2018, Kotobukiya released the Nightwing Ikemen Statue (sculpted by Naoya Muto), a collectible Grayson with his hip popped in all the right ways, shushing us with a come-hither stare.

In Sam Humphries' Nightwing run, thanks to the talents of illustrators Bernard Chang and Marcelo Maiolo, Grayson has been hypersexualized while undercover as an exotic dancer whose booty rarely leaves the frame.

Nightwing's poppin' peach is not just a festival for the eyes, but it is also a punk rock statement about comics' portrayal of "fit" characters. There has been no shortage of butt-pose movie posters, and hypersexualized female heroes and villains, be they awkwardly arching their backs to climb walls or posed ass-up while dead. Thought a tongue in (butt) cheek portrayal of a male character, Nightwing's various glamour shots stand to chip a little bit away at the gender disparity in comic book portrayals. For Simone, for whom many of these images were drawn, it's a feminist statement; for others, it's a fun way to acknowledge comics fans who want some gender diversity in our objectification.

Chosen One of the Day: a joyous Dick Grayson in Young Justice