Paper Girls — ​​Prime Video’s adaptation of the award-winning comic series written by Brian K. Vaughan and illustrated by Cliff Chiang — is only a month away from premiering on the streaming platform. To celebrate the occasion, Amazon released a second one-minute teaser for the show, which features some more time travel shenanigans for the four paper delivery girls from 1988, who somehow find themselves in 2019.

Check out the teaser below:

Just like the comics it's based on, Paper Girls centers on four girls from 1988 who, on Halloween night, find a time travel machine and inadvertently send themselves to 2019. In the teaser, we see the girls’ chagrin at this development and also see one of them — Erin Tieng (Riley Lai Nelet) — meet her adult self (Ali Wong).

Today's video, which sheds a bit more light than the first teaser Prime Video put out, also hints at the time travel war the girls soon find themselves in the middle of. In the trailer’s few seconds, we see glimpses of the time travel machine as well as the girls fighting off two assailants, though it’s unclear if those assailants ​— one of whom is wearing a hat made from a wolf’s pelt — are time travel-related or otherwise.

In addition to Nelet, the titular Paper Girls are played by Camryn Jones (“Tiffany Quilkin”), Sofia Rosinsky (“Mac Coyle”), and Fina Strazza (“KJ Brandman”). On the adult side of things, in addition to Wong, the show also stars Nate Corddry as Larry, and Adina Porter as Prioress.

Season 1 of Paper Girls premieres on Prime Video on Friday, July 29. In the meantime, check out the newly released poster below. 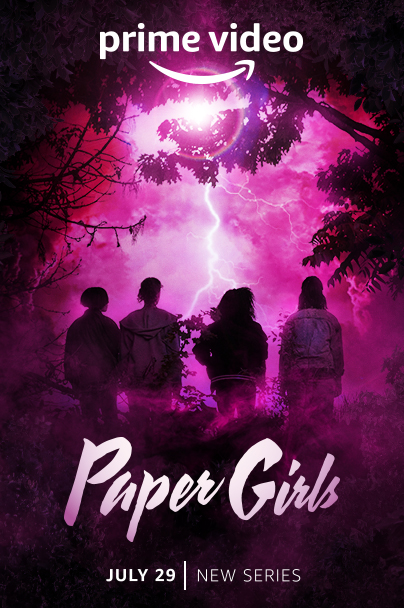 Meet the 'Paper Girls' in first teaser for Amazon series