Appearing like a shining star to usher in the new year, IDW Publishing is delivering a fresh new fantasy series set in feudal Japan titled Rising Sun, which is based on the award-winning tabletop miniatures game published by CMON Limited and designed by Eric M. Lang — and SYFY WIRE has an exclusive look at the premiere issue charging into comic shops on Jan. 15.

The absorbing plotline introduces readers to Chiyoko of the Koi Clan, fearless leader of a group of elite clan warriors on a perilous mission to save 12th-century Japan from lethal dragons and monsters. But perhaps the greatest threat she's apt to confront along the way is not the myriad monsters rampaging across her homeland, it's her companions joining the quest. 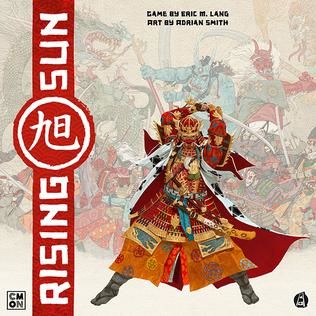 Marz and Rodriguez have collaborated previously on IDW’s acclaimed Skylanders series, and here they apply their considerable talents to the popular source material. This bestselling adventure board game was initially published in 2017 via a successful Kickstarter campaign and employs clever strategy and warfare tactics in feudal Japan where ancient gods have returned to rebuild the Asian empire. It also was bestowed the 2018 RPC Fantasy Award in the Tabletop & Miniatures Game category.

Marz admits that upon seeing the game he immediately knew it was a fantastic world he wanted to play in.

"I love samurai culture and Japanese folklore," Marz tells SYFY WIRE. "I've done Japanese-themed books before, notably Samurai: Heaven and Earth at Dark Horse and Shinku at Image. It's one of my favorite genres, so this is a perfect fit for me.

"Rising Sun is a visually stunning world, and we're giving Martin every opportunity to dazzle readers. Fans of the game are going to embrace it, and I think even people who are unfamiliar with the game are going to be able to plug right in. You don't need to have played the game in order to read the comic."

“Oddly enough, adapting games into comics is something Ron and I have a lot of experience in!" he tells SYFY WIRE. "We spent two years working together on the Skylander comic series, and I worked with Nintendo on their Donkey Kong/Bowser tie-in comic. So we are pretty familiar with looking at a game world and finding hooks to launch stories from.  Now, there are plenty challenges in figuring out exactly what aspects of the game work into the story naturally. You have to reflect what the game mechanics represent and not take it literally, but the job is way easier when there is a rich world to draw from."

Permeated with colorist Mae Hao's jade greens, striking golds, and ruby reds, Coccolo's artwork leaps off the page to engulf the reader in the furious action and add to the storytelling talents of Marz and Rodriguez.

"The art of the book is absolutely gorgeous," Coccolo tells SYFY WIRE. "I'm sure the fans of the game will find that I treated the source material with respect, and hopefully they'll enjoy this comic as much as they enjoy the game. If anything, it'll be a really cool companion piece!”

Now gather your clans and bolt into our exclusive five-page peek at IDW's Rising Sun #1 in the gallery below, then let us know if this ambitious new book will help you ring in 2020 with style.

It's a fan thing
Join SYFY Insider to get access to exclusive videos and interviews, breaking news, sweepstakes, and more!
Sign Up for Free
All Posts About
Comics
News
Exclusives
IDW Publishing
Interviews
Related Stories