If you've been saving your spare change all year you might want to crack open your Incredible Hulk piggy bank to cash in and take part in Prop Store's first-ever Marvel Television Live Auction when the heroic lots hit the blocks on August 12-13 — and SYFY WIRE has an exclusive preview of the historic event.

Although Netflix gave the cancellation axe to its Marvel series: Daredevil, Iron First, and Luke Cage, this trio of superhero shows will live on in legend via a momentous two-day sale of authentic costumes, original props, weapons, and set decorations next month. 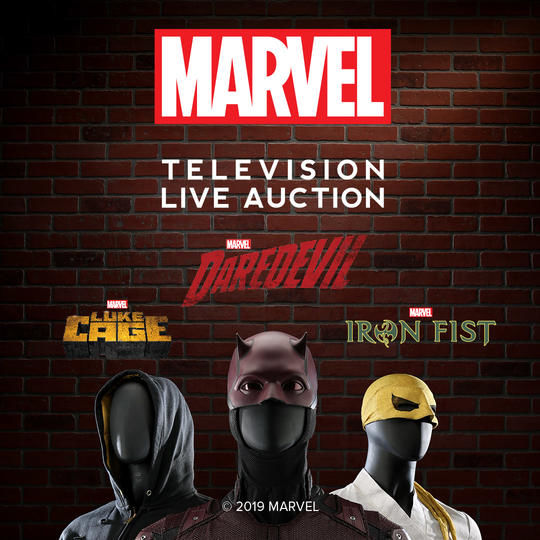 Today also marks the date when the catalog will be released, detailing all items available at auction. This is a rare opportunity to bid upon and acquire one of more than 850 authentic screen-used items employed to create the magic of these three Marvel Television series.


"The collector appetite for the material from Marvel's Daredevil, Marvel's Luke Cage, and Marvel's Iron Fist is exceptionally high," Prop Store COO Brandon Alinger tells SYFY WIRE. "Prop Store has spent many months curating and cataloging this collection, and are very proud of the catalog and the upcoming auction. All of the fan favorite characters are represented and we can't wait to see the response."

An online catalog will be available today at Prop Store's home site with images of all the lots up for grabs when the gavel falls.

Bidding and advanced bids can be placed online from anywhere in the world and participation can occur via phone, online, or in person at their Southern California showroom.  Each winning item comes complete with a Marvel and Prop Store certificate of authenticity signed by Marvel Chief Creative Officer Joe Quesada.

A limited selection of auction highlights will be on display in a preview exhibition at Prop Store’s Los Angeles County facility from August 1-13. The exhibition is open to the public and free-to-enter. A wider selection of desirable lots will also be on view at the Marvel and Prop Store booths during San Diego Comic-Con from July 17-21.

Enjoy our exclusive preview of the Marvel Television Live Auction in the gallery below, then tell us which of these enticing goodies you might attempt to acquire!