Read This Fanfiction: Great Batman stories in honor of his 80th birthday

Happy birthday, Batman! The caped crusader turned 80 on March 30, and so we’re celebrating with some bat-acular fanfiction about Gotham’s favorite superhero. Bruce Wayne & Co. have a lot to celebrate. Eighty years and countless stories through comics, television shows, films, and games is nothing to balk at. And with DC’s Detective Comics, the home of the birthday boy, having surpassed 1,000 issues, it’s a momentous time for all!

So here’s a selection of some great fanfiction about Batman, his friends, his enemies, and the crazy Gotham we all love.

"A Poor Man's Hero" by Capucine

What if Batman became Batman without all the gobs of cash? What if he was a guy who started out impoverished, as a child, and saw his parents die due to violence, and vowed to protect other people from such things happening to them?

This Bruce Wayne isn't a rich businessman or famous. He owns a martial arts dojo, and that barely keeps his nose above water. And then he takes in foster kids on top of that.

But this Batman is just as relentless in his pursuit of justice as his rich counterpart. Will he be able to successfully pull it off as part of society and not above it? Will his lack of funds prove disastrous, or his obviously less sophisticated background make him more of a target for the GCPD? And what about the Robins, the Batgirls, and so on?

These are drabbles about their lives, all interconnected, all with varying levels of humor and angst and fluff.

"What To Do When An Unfamiliar Batman Falls On You. (Don't get between him and his Robin.)" by CatChan

Instead of the pretty manageable cookies explosion he was bracing himself for, Robin barged in the common room to get tackled to the ground by Batman.

Okay, so he was used to that, even if Bruce avoided doing that where Robin's teammates could see it because it was just a little humiliating, and Dick liked to be seen as a strong independent young hero, and not as a sidekick that got tackled around by his mentor.

But then again, having Batman's nice Kevlar cape between himself and the explosion was always appreciable. Plus, Batman had also protected Zatanna, so it all wasn't quite as bad as it could have been.

It was after, when Batman cursed and knelled up, that Dick started suspecting something was really, whelmingly wrong.

The game's been going for almost twenty years. Bruce knows the rules, he knows the moves, he knows how it'll end. But when he tries to change the game and someone else starts a new one, Bruce can only hope he learns these rules quickly enough to win. 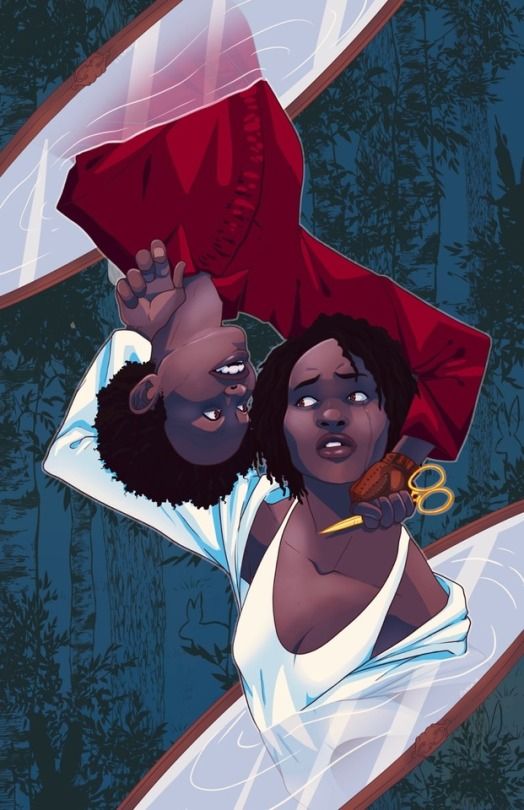 Us is Jordan Peele’s latest masterpiece and an instant classic that is already screwing with everyone’s mind, disturbing them to their core, and seriously winning at the box office. The ending is what a lot of people are mulling over, and no spoilers here, but if you’re looking for an alternate ending that’s just as chilling … read on.

More TV spots, trailers, and excitable tweets about the upcoming Godzilla movie are appearing on our various screens, which, to me, calls for a look at the fic of the 2014 Godzilla universe. There is a surprising handful of it, but my favorite was this tale of a (somewhat) grown-up Sam Brody and the King of Monsters.

"Nice Jerseys and Other Adventures in Knitting" by Tarash

What We Do in the Shadows began as a delightful horror-comedy film and is now a newly premiered television show of equally hilarious proportions. If you're looking for more vampiric antics, definitely read this fic about Deacon loving to knit, especially jerseys for his werewolf friends.

"Named and Unnamed Guilt" by vintage1983

The OA has returned for its second season with more mind-blowing and interdimensional mysteries for us all. If you're one of those who can't help but look at Prarie and Hap and want to smoosh them together, well, here you are.

According to Comic Book Resources, it was announced at Wonder Con this year that Harley Quinn will be getting her own 26-episode animated series this fall. What better way to get into the mood than with this alternative take on Harley's story? What if she'd go to Poison Ivy's cell instead of Joker's?

Crack!fic is a gem of the fanfiction world. Sometimes silly, other times weird, but also with a heavy dose of WTF, crack!fics are beautiful creations of boredom, sugar rushes, or a too-long hiatus. Or sometimes it’s just a weird Wednesday. Regardless of where it come from, the crack!fic being featured this week is...

"I Am Groot" by sherlocksmyth

Possibly the best fic I have ever read in my life. A perfect representation of the raw emotional energy and deep connection we all have with the Greater Marvel Universe, especially in light of the Endgame posters that were released this past week. I’m lost for words at this masterpiece of prose.