For some, the truth is hard to see. Dystopian settings allow storytellers to strip away the fluff in our lives and put the worst parts of society on display — with nothing to cover up the bullsh*t. The futures in these works often show us that the more things change, the more they stay the same, with the most negative aspects of society only magnified.

One common source of futuristic dystopian oppression is religion. Genre works based in dystopian futures show us just how lethal religion can be when used to gain and inflict control, something that is no secret given the examples we see in our real-life past and present. Films like The Book of Eli and Babylon A.D. are just two of a large group of genre movies that use the practice of religions as a highly coveted form of control.

The Hughes Brothers’ Book of Eli , starring Denzel Washington and Mila Kunis, takes place in a world decimated by a nuclear war some 30 years ago. Washington’s character, Eli, finds himself in a ramshackle town run by a warlord named Carnegie, played by Gary Oldman. Things, of course, hit the fan soon as Eli arrives because Carnegie has been searching for the book Eli has in his possession: the Bible. 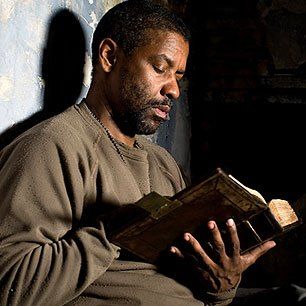 Carnegie wants the Bible because he understands the power it can hold. Part of the lore in the film is that the war was brought on by the Bible, or rather by those who subscribed to it in the same manner in which Carnegie wants to use it. He wants to continue to rule his town with an iron fist, believing the Bible will give him the power to be feared and never questioned because it would provide him with the words to do so. He stops at nothing to obtain it, sacrificing the very men who were protecting him and the power he already had over the people in his town. His thirst for power becomes his demise, in the way most of the religious texts were burned after leading to the demise of the world at large.

The Book of Eli presents Carnegie’s mad lust for this book as a direct reflection of how others have gone about using the Bible to carry out their agendas. Every single day, someone is interpreting the Bible to justify their beliefs and actions towards others. Carnegie is fully cognizant of how the Bible can be used to give hope to the hopeless and uses that to manipulate them for his benefit. It's the way he leans into this control that makes Carnegie such a dangerous character in a world that is already a struggle to survive in.

Sometimes films don’t use Christianity explicitly, instead creating a brand new religion that arises in the dystopian future that follows a similar religious model. The theme stays the same: using the religion as justification to rule over others in the way the person or persons in power see fit, preying on those in search of hope and direction when the world is on the brink of spiraling out of control or well past that point. Babylon A.D. has its own created religion used in such a way.

In director Mathieu Kassovitz’s film, the world is on the cusp of total chaos. A religious group, the Noelites, does the absolute most to try and capitalize on the state of the world. They go as far as manufacturing their own miracles, one of them being in the form of a young woman, Aurora, who is supposed to be their version of the Virgin Mary. The Noelites place a computer chip in Aurora while she is still a fetus so that she may appear to possess knowledge beyond any normal human, and program her to become pregnant at a certain time so that they may present her as their virgin birth.

The long game the Noelities are willing to play to secure power and control is next level but also not too far removed from some modern-day forms of Christianity, all based on the knowledge that people will always need something to cling to. One example is the snake-handling pastors who arose from the Holiness movement in the early 20th century. Pastors and their congregations would handle snakes to show non-Christians that God would protect them from harm. Unlike some of those snake-handling pastors, however, the High Priestess of the Noelites wants nothing but power, using the manufactured miracles to gain converts.

Both the worlds of The Book of Eli and Babylon A.D. are dystopian futures with either a nonexistent government or governments that are extremely minimal in power, with control entirely sought through the use of religion. This isn't new. Church and state really aren’t all that separate today. When religion is used as a way to covet power in these dystopian futures, it's a reminder of how dangerous it can be when control is more sought than peace.

It's a fan thing
Join SYFY Insider to get access to exclusive videos and interviews, breaking news, sweepstakes, and more!
Sign Up for Free
All Posts About
Fangrrls
Movies
Babylon A.D.
Religion in Genre
The Book of Eli
Related Stories

She-devil: The female Satans of genre