Ross Andru should be a household name, a guy who comes up in every conversation about the great artists in comics. The man co-created the Punisher and the Metal Men, spent a decade drawing Wonder Woman during the Silver Age and also penciled the history-making first team-up of Superman and Spider-Man. Unfortunately, in many ways, he has received the historical cold shoulder, and it's hard to understand why. Andru's birthday is June 15, which inspired me to take a spill down an internet rabbit hole of some of the incredible artwork Andru put to paper during his career, and I remain gobsmacked by his sequential storytelling genius.

For a generation of fans, Ross Andru is the definitive Spidey artist. He had a five-year run on The Amazing Spider-Man that covered the back nine of the 1970s, a decade when interstitials on The Electric Company, a live-action television series, cartoon reruns and endless merchandising made Spidey a mainstream pop culture icon. Andru's crisp line art in Marvel's flagship comic was no less iconic. His Spider-Man was lithe and muscular. His Peter Parker kept the good looks John Romita Sr. had given him after he replaced Steve Ditko. Spidey's supporting cast, the best in comics at the time, all looked great under Andru's pencil, especially Mary Jane Watson. He was so good, in fact, that he was handpicked by Gerry Conway to be the artist for one of the most important comics of all time, Superman vs. The Amazing Spider-Man.

"The real reason was that I just wanted to work with him again," recalls Conway during a phone conversation with SYFY WIRE. "I had the backing of [then-DC Comics EiC] Carmine Infantino to pick whoever I wanted to work with. The contract had stated DC would provide the writer and Marvel the artist. And it made perfect sense because Ross was one of the few artists who had drawn both characters at that point. It was an easy call to make. I've heard that upset Len Wein a bit because it took Ross off the Spider-Man book for a few months."

By that point in their working relationship, Conway had such trust in Andru's ability to translate his stories that he rarely bothered to write them down. "We would just talk about it on the phone. I must have given him some written ones, maybe if I had an idea for a specific scene, I would write that down," he says. "With the Superman vs. Spider-Man book, we plotted that out together five or six pages at a time, moving from chapter to chapter."

Dick Giordano was the official inker of the crossover, working with Neal Adams at Continuity Studios. While Giordano focused on the main characters, he farmed out the backgrounds and other details to a host of other inkers at the studio. Conway shared something that occurred during the production process that suggests that even back then, Andru wasn't getting the respect he deserved. "Neal Adams just walked in and decided to redraw some of Ross' work on the comic without his knowledge," he says. "[It was] an act of grotesque arrogance on Neal's part which none of us working on the book were aware of at the time."

Conway, being the de facto editor on the comic as well as the writer, had seen Andru's untouched pencils. After the inked pages were sent back to DC for printing, he and others immediately noticed. "Neal redrew some of Ross's figures of Superman because he simply didn't agree with his interpretation," he notes. "It was … an insult to a great artist."

Conway says Ross must have been offended but he was too polite a guy to ever make a big stink about it. "He was a very mild-mannered gentleman," he points out.

For my money, Andru is a Top 3 Spidey artist – behind only John Romita and Todd McFarlane – because he is most responsible for cementing the webhead as New York City's premier superhero. His stunning backgrounds and realistic portrayals of the city's topography made the city seem more real than it did in any other comic. Andru enjoyed photography and often carried a camera wherever he went to take pictures. "Ross really loved working from reference," Conway says. "We shared a mutual interest in New York City and incorporating it into Spider-Man stories. He used to come to my apartment for dinner and we would go up to the roof to take pictures. There are scenes in those Spidey comics that are set on the roof of my apartment building. He would go everywhere and take pictures."

His penchant for accuracy caused Marvel trouble in one instance. "We did a story with the Mindworm [in Amazing Spider-Man #138] set around a house in Far Rockaway, Queens," Conway remembers. "Ross took photos of a real house for reference, and he did too good a job. People started showing up at the house. The owner wasn't happy about it and even tried to sue Marvel over it!"

Conway notes that Andru's greatest strength was his storytelling ability. "That's a talent many artists don't have today," he adds. "It's hard to teach that. Ross excelled at it. He was very much a story collaborator with me."

Andru was versatile enough to easily juggle the melodrama of Peter Parker's love life and some of the sillier elements of Bronze Age Spidey tales, like the Spider-Mobile. Scott Edelman, a former writer for Marvel in those days, recently shared an unpublished piece of Andru art on Twitter that showed off Ross' comedic side. It showed an alternate version of Peter's reaction when the clone of Gwen Stacy showed up. 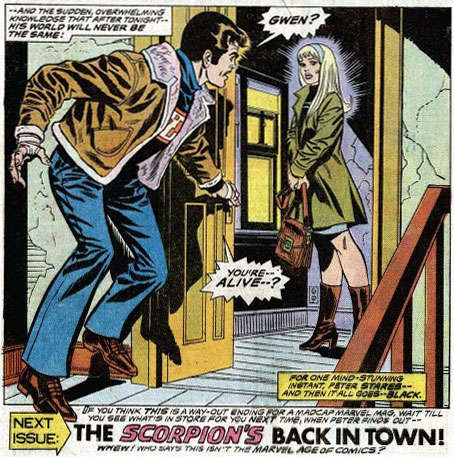 "He'd done an overlay to the more realistic panel, and it had all of us in the Marvel bullpen laughing the day he brought in the art for that issue," Edelman recalls. "People didn't get to see that side of Ross very often. I immediately photocopied it so its existence wouldn't get lost. I wish I knew where the original to that piece ended up."

As with most things in life, if you want to really learn the truth about how comic artists are perceived, you follow the money. And in the original art world, collectors long ago gained an appreciation for Andru's superior line work. I'm an avid collector, and for years you could find Andru panel pages from his Amazing stint for a few hundred bucks. That is no longer the case. Pages of his Spider-Man artwork now sell for thousands, according to art dealer Mike Burkey of the art site Romitaman.com. The interest isn't just in his Spidey artwork, either.

"His work on Wonder Woman and Metal Men are highly sought-after," according to Burkey, who says when it comes to the web-slinger's artists, Andru belongs in rarefied air. "He is arguably the #3 greatest Spider-Man artist ever, behind Ditko and Romita," he says.

There are other signs that Andru is starting to get his due. Brian Bendis and Mark Bagley named the principal of Peter Parker's high school "Ross Andru" in Ultimate Spider-Man #87, a lovely tribute to the artist whose last work in Amazing Spider-Man was Issue #187, when Peter graduates from college.

He did much more than just draw Spider-Man, of course. We've mentioned his Wonder Woman and Metal Men runs. But one of the high points of his career was launching, together with writer Robert Kanigher and inker Mike Esposito, DC's sci-fi/war hybrid feature, "The War That Time Forgot," within the pages of Star Spangled War Stories. Those comics about World War II soldiers stranded on a Pacific island littered with dinosaurs were fascinating riffs on Pacific Theater adventures. As a young collector, I dug through a bazillion long boxes to find those back issues. Years later, Dinosaur Island would serve as the backdrop for the opening sequence of Darwyn Cooke's masterpiece, The New Frontier.

Perhaps Andru's low profile is due in part to the fact that he died somewhat unexpectedly in 1993 at the age of 66, a time before the Internet had come into play and when Image Comics was introducing the era of the Superstar Artist. Or it could be because Andru was a classic comics grinder. He toiled away on monthly books and he cranked out a bunch of covers for Marvel and DC during a time when artists worked incredibly hard for incredibly little in regard to pay and fanfare.

"He did not clamor for attention the way other artists of that time period did," Conway says.

"Ross was a nice guy, and seemed quiet and laid-back in my bullpen dealings with him," adds Edelman. He agrees Andru's contributions to the Spider-canon have been overlooked for way too long. "Ross' run on Amazing Spider-Man is tremendously underrated," he says. "Steve Ditko and [John] Romita Sr. and [Todd] McFarlane get most of the fan love, but with the blossoming of Peter's relationship with Mary Jane, the return of 'Gwen,' the introduction of The Punisher, the historic Superman crossover, and much more, Ross definitely needs to be revisited and reevaluated."

Whatever the "why" is, Andru deserves more love for what he gave to comics.

Share your favorite Ross Andru art! Find me on Twitter/Facebook/Instagram and tell me about them. I like reading good comics and helping boost their profile.