Taking a cue from SpongeBob SquarePants' lovable lunkhead, Patrick the Starfish, the robotics experts at Pittsburgh's Carnegie Mellon University have created a semi-creepy silicone robotic device patterned after an oceanic creature called a brittle star. PATRICK mimics the five-armed structure and crawling behavior of the marine invertebrate classified as a close cousin of the starfish.

'The inspiration for PATRICK is the brittle star, a type of starfish that, while not necessarily fast, is surprisingly agile and dexterous," researcher Zach Patterson tells SYFY WIRE. "The brittle star has long flexible arms that they use to pull themselves along the sea bed, to climb on rocks, and sometimes to snatch prey. We saw them as an interesting model for a robot because they have this diverse array of functionality - the highly flexible arms raise interesting possibilities for tasks we can perform and they also allow us to explore fundamental questions about controlling robots that consist of deformable structures." 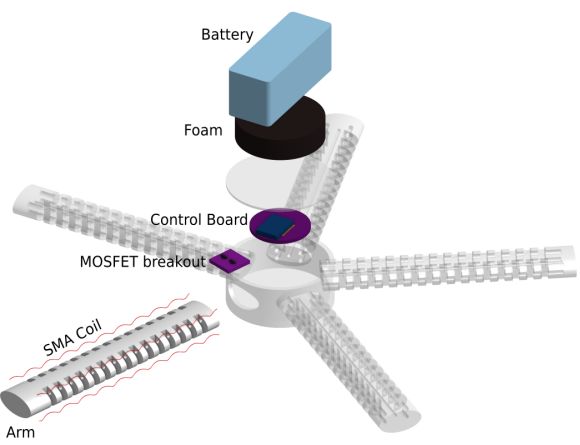 Carnegie Mellon's bio-inspired robot is the first untethered underwater crawling soft robot as described in a new research paper presented to Cornell University's arXiv. According to the study, soft robots are designed to be inherently safer and have the ability to provide more stable interactions with their environment since they can mechanically deform while responding to surprise interactions. But their intricate mechanics can make them tough to control, especially when considering the advanced function of locomotion.

That's where PATRICK's unique method of movement comes in. Ambling along under the sea utilizing rubbery legs actuated by coils of shape-memory-alloy wires (SMA), PATRICK is capable of some remarkable feats of agility unseen in previous generations of similar machines. SMA is a specialized type of metal whose properties include high flexibility at room temperature, quick heat-up time, and a return to previous shapes once an electric current surges through.

"The design emerged from previous work performed in our lab by Xiaonan (Sean) Huang," Patterson added. "Sean made some really impressive cordless soft robots that are able to crawl along the ground. The robots use shape memory alloy (SMA) actuators just like PATRICK. At a high level, the differentiating goal with PATRICK was to incorporate more actuators to enable the type of complexity that we see from the brittle star."

PATRICK stands for Pentaradially Articulated Thermoresponsive Robot Including Compliant Kinematics and the exact words needed to fill in the acronym weren't specified until after the team named the robot.

Patterson and the Carnegie Mellon team provided PATRICK with an intriguing ability to carry out sophisticated computations, sense its immediate surroundings, and autonomously pick what direction to move while submerged using a remote wireless control linked to cameras and other devices.

"For applications, in the short term we plan to use it as a research platform to better understand brittle star locomotion by performing experiments that might be difficult with the real animal," Patterson notes. "Longer term, I can see robots like this being used to perform geological and ecological sampling, especially when it is critical that the sampling device does not disturb the environment."